New Legislation Would Classify Inciting to Riot and Rioting That Targets Protected Classes as Offenses to the State's Hate Crimes Law. 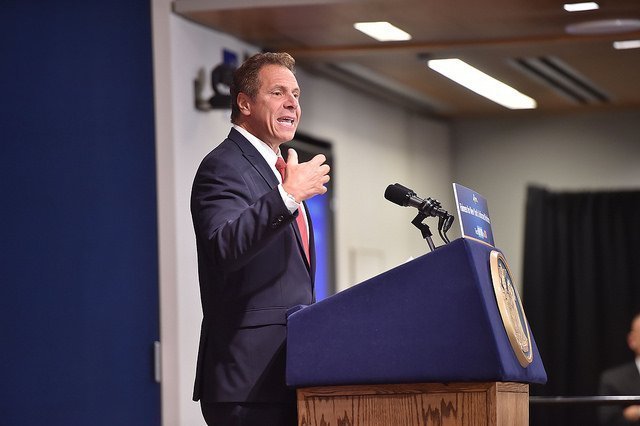 Albany, NY - August 15, 2017 - In the aftermath of the violent and deadly events in Charlottesville this past weekend, Governor Andrew M. Cuomo today announced he will be advancing legislation to add the crimes of inciting to riot and rioting that targets protected classes to the list of specified offenses under the state's hate crimes law. These legislative changes, known as the Charlottesville provisions, will reaffirm that while peaceful demonstrations are allowed, New York will never tolerate advocacy or the incitement of imminent violence against protected classes within our communities.
"The ugly events that took place in Charlottesville must never be repeated, and in New York we're going to stand united against hate in all of its forms," Governor Cuomo said. "Our diversity is our strength and this legislation will help protect New Yorkers and send a clear signal that violence and discrimination have no place in our society. New York is one community and one family, and we will never stop fighting to ensure the safety and equal treatment of all New Yorkers."
Additionally, the Governor once again called for an expansion of the state's Human Rights Law to protect all students statewide. Under current law, only private school students are protected by the Human Rights law, meaning that if a public school student is discriminated against in school, that student has no claim.
The Charlottesville Provisions
Under state law, a person commits a hate crime when one of a specified set of offenses is committed targeting victims because of a perception or belief about their race, color, national origin, ancestry, gender, religion, religious practice, age, disability or sexual orientation, or when such an act is committed as a result of that type of perception or belief. Hate crimes can be perpetrated against an individual, a group of individuals or against public or private property. Under the Governor's proposal, the Hate Crimes Law would be amended to add inciting to riot and rioting, when directed at a protected class, to the list of specified offenses punishable as a hate crime. The penalties for engaging in rioting would be increased from an E felony to a D felony and inciting to riot would be increased from an A misdemeanor to an E felony.
Expanding the Human Rights Law
In addition to amending the Hate Crimes statute, the Governor is also calling on legislative action to amend the Human Rights Law to protect all public school students and institutions from discrimination. Following a 2012 decision by the New York State Court of Appeals that found public schools did not fit the definition of an "education corporation or association", the State Division of Human Rights lost its ability to investigate reports of bullying, harassment, or other discrimination being made by public school students. This decision was made despite the fact that the Division had asserted jurisdiction over public schools for nearly three decades and was forced to dismiss over 70 open complaints filed against public schools at the time.
Governor Cuomo yesterday also signed legislation giving prosecutors more tools to combat hate by allowing prosecutors to increase penalties against those who make bomb threats against community centers.
In November 2016, Governor Cuomo announced during an address at Abyssinian Baptist Church several actions to protect civil rights and combat hate crimes in New York, including the creation of a State Police unit to investigate reports of hate crimes, an expansion of the state's human rights law to protect all students, and the establishment of a new emergency legal defense fund for immigrants. The State Police have created a new hate crimes unit and Governor Cuomo launched the nation's first public-private immigrant legal defense initiative called the Liberty Defense Project, but the State legislature has not yet passed legislation expanding the Human Rights Law.
Protecting Civil Rights and Combatting Hate Crimes
New Yorkers who have experienced bias or discrimination are encouraged to call DHR's toll-free hotline at (888) 392-3644 from 9 a.m. to 5 p.m. Monday - Friday. If you want to report a crime or fear for your safety, call 911 immediately.
If you have been the victim of a crime, you may contact the New York State Office of Victim Services, which funds 223 programs statewide, providing direct services, such as crisis intervention and counseling, to victims of crime, including hate crimes. Those programs also can help any crime victim apply for compensation and other assistance from the agency, which is a safety net for individuals who have no other resources. Individuals seeking help from OVS also can search for a service provider online: https://ovs.ny.gov/locate-program. For more information, please visit: www.ovs.ny.gov.
New York has the proud distinction of being the first state in the nation to enact a Human Rights Law, affording every citizen "an equal opportunity to enjoy a full and productive life." The New York State Division of Human Rights is the agency in charge of enforcing this law, which prohibits discrimination in employment, housing, public accommodations, credit, and other jurisdictions, based on age, race, national origin, sex, sexual orientation, marital status, disability, military status, and other specified classes. For more information about the Human Rights Law and the work of the agency, please visit the Division of Human Rights' website at www.dhr.ny.gov.