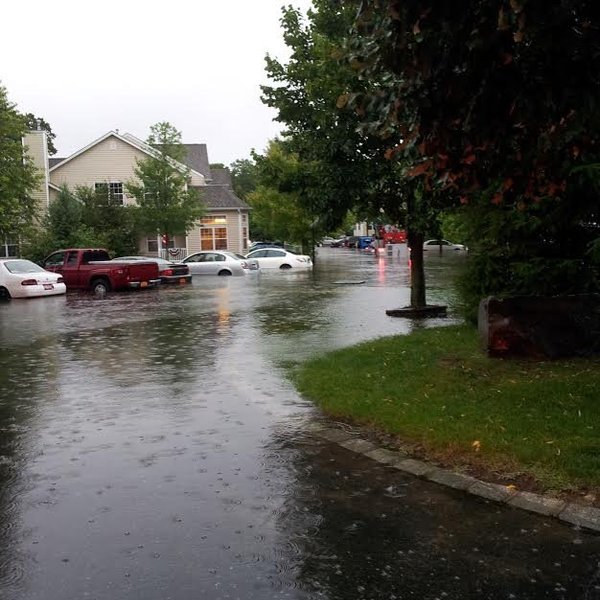 Suffolk County, NY - August 13, 2014 – Suffolk County Executive Steve Bellone declared a State of Emergency and updated residents on emergency response efforts alongside Larry Schwartz, Secretary to Governor Cuomo, officials from the Suffolk County Fire Rescue & Emergency Services (FRES), the Suffolk County Police Department, NYS DOT and other officials.  Parts of Suffolk County received more than nine inches of rainfall in a two-hour period, more than any other recorded storm in State history. The impact of the storm caused multiple road closures and unsafe conditions; however, emergency personal were immediately on scene providing emergency care and rescue efforts in areas that were severely affected.

“The impact of this unprecedented and unpredicted storm was severe,” said County Executive Bellone.  “However, our coordination and communication with emergency services, Governor Cuomo’s office, Suffolk County Police and FRES, New York State  DOT and local municipalities and local fire departments, allowed us to respond with immediate and decisive action.  In some cases we had first responders on scene within two minutes.  I want to thank all our emergency personel for the hardwork and life-saving efforts they put forth this morning.”

Secretary to the Governor Larry Schwartz said, "Governor Cuomo has directed state resources to Long Island as residents and business owners begin to recover from this crippling storm. The significant rainfall caused a number of roadway closures, power outages, damage to private property, and delays to public transportation systems and the state is actively working alongside our local partners to help in the recovery.”

“The once-in-a-century rainfall event that occurred impacted every resident across the Town of Babylon, snarling traffic, flooding basements, and stranding commuters.  It was only thanks to our dedicated emergency responders that we avoided the loss of life and potentially dire situations,” said Babylon Town Supervisor Rich Schaffer.   “I want to thank our Suffolk County officials, along with New York State, for providing us with the emergency support and resources to get us through these perilous conditions.”

“We were able to address this morning’s weather event quickly and efficiently through communication with our state and local partners,” Suffolk County Fire Rescue and Emergency Services Deputy Commissioner John Jordan said. “We are contacting the towns to establish damage assessments and will continue to work with the towns through recovery from this storm.”

The flash flood conditions forced the shutdown of several major roadways and highways, including the Long Island Expressway, Northern State Parkway and Southern State Parkway.  Suffolk County police increased the number of patrol officers on the streets and added 911 operators for the influx of calls.  Emergency vehicles, including a five-ton truck, were utilized to assist dozens of motorists that were stranded as a result of the storm.  Suffolk County’s Department of Health also issued an advisory against swimming at 66 Suffolk beaches based on the potential of high bacteria levels that exceed New York State standards.

Suffolk County Police confirmed one fatality due to storm related conditions on the Long Island Expressway.

In addition, the American Red Cross established temporary shelters for displaced residents impacted by the storm.  The County encourages residents whose homes sustained structural damage by the storm to contact their local municipality.

The County continues to monitor the status and cleanup of affected roadways.