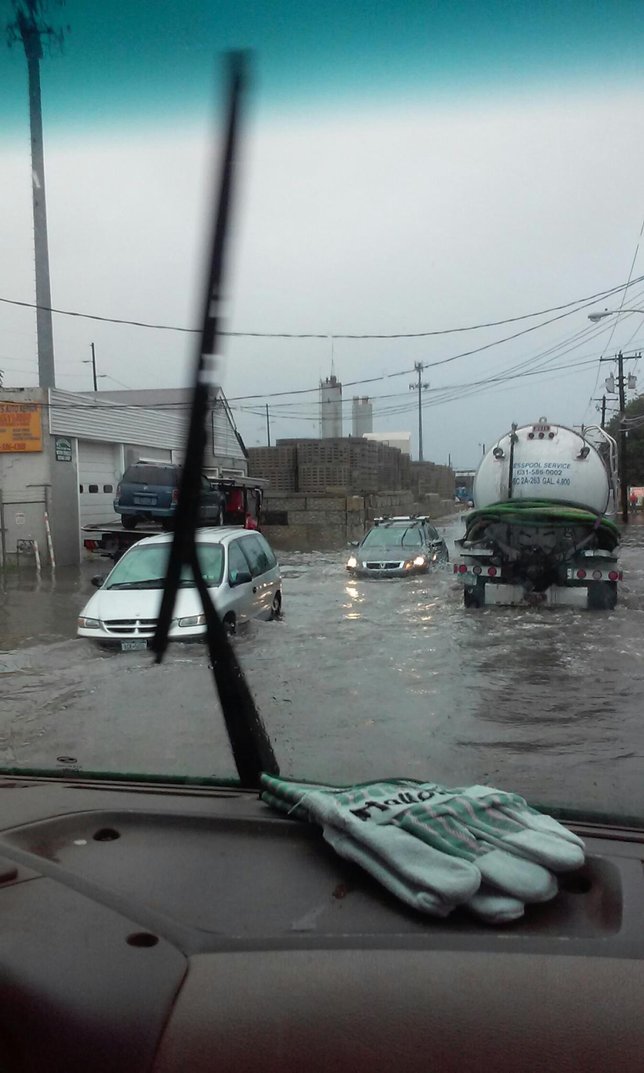 Long Island, NY - August 13, 2014 - Governor Andrew M. Cuomo today dispatched resources to assist Long Island’s recovery from the nearly 13 inches of rain that fell between the hours of midnight Tuesday and 7:15 a.m. Wednesday that resulted in flash floods. The State’s Emergency Operations Center has been activated to monitor the situation.

The flooding caused closures on eleven major highways in Long Island. Cars were stranded on the Southern State Parkway at exits 38 and 39, but all westbound lanes are now re-opened and residual flooding has cleared from the roadway. The Northern State Parkway at is closed at Rt-107, and the LIE is closed at exit 50. The State’s Emergency Management Non-Commissioned Officer fleet has been dispatched, and both the Traffic Incident Management system and Commercial Vehicle Enforcement Unit are engaged in flood operations. The State also dispatched a pumping truck to the 1st Precinct in Babylon.

NYS Division of Homeland Security & Emergency Services (DHSES) officials from the Office of Emergency Management and the Office of Fire Prevention and Control in Nassau and Suffolk Counties are assisting local emergency management officials. DHSES has sent water pumps, and is ready to deploy any additional resources to the region if requested.

Roads and Bridges
The New York State Department of Transportation has 400 maintenance staff working in the affected areas pumping water from roadways and clearing debris carried by the floodwaters from drainage grates and recharge basins. The Department has teams deployed to assess any road damage.

Public Transit
Heavy rain caused flooding, delays and some interruptions of service along the MTA Long Island Rail Road this morning. A section of the Port Jefferson Branch remains suspended between Huntington and Port Jefferson after flooding washed out some ballast from under the tracks east of Smithtown, and the LIRR is arranging substitute bus service.

Scattered delays of 30 minutes persist throughout the LIRR network because of weather-related problems, including some sections of track and yards where water rose above the rails and reached the third rail power source. The Montauk Branch is also experiencing 90-minute delays due to an earlier disabled train. Limited service has been restored on the Far Rockaway Branch.

Some station parking lots have experienced flooding, and some station buildings have been damaged by rising water.

Private Property
The Department of Financial Services Disaster Hotline can be called at 1-800-339-1759 with insurance questions about storm-related property damage. Property owners with building code related questions can call the Department of State's Division of Code Enforcement & Administration at 518-474-4073.

The NYS Division of Homeland Security & Emergency Services urges people in the affected regions to adhere to the following recovery tips:

DEC Forest Rangers are prepared to respond with 4WD vehicles, ATVs and kayaks if necessary.

Emergency Spill Response
DEC operates a 24-hour Emergency Spill Hotline at 1-800-457-7362 for the public to notify the department of suspected spills.

Shellfish Closures
The Department of Environmental Conservation has closed shellfish harvesting areas in most towns in Nassau and Suffolk counties to protect the public health. Effective immediately and continuing until a determination is made that conditions no longer exist that may make shellfish hazardous for use as food, the following areas are designated as uncertified and the harvest of shellfish is temporarily prohibited:

Towns of Babylon and Islip: All that area of Great South Bay and its tributaries lying westerly of the northbound span of the Robert Moses Causeway bridges.

Towns of Islip and Brookhaven (south shore): All that area of northern Great South Bay, including Nicoll Bay, lying west of Green Point and northerly of a line of buoys extending easterly from the southern base of the northbound span of the Robert Moses Causeway Buoy R N "30" located south of Green Point.

Town of Huntington: All of Northport Bay, Duck Island Harbor and Centerport Harbor lying easterly of a line extending southerly from the southernmost point of West Beach (also known as Sand City Beach) to the northeastern corner of the beach pavilion at the Town of Huntington’s Crescent Beach in Huntington Bay.

Town of Smithtown:  All that area of Stony Brook Harbor and its tributaries.

Additional information about temporary shellfish closures will be available on DEC’s website at: http://www.dec.ny.gov/outdoor/7765.html.