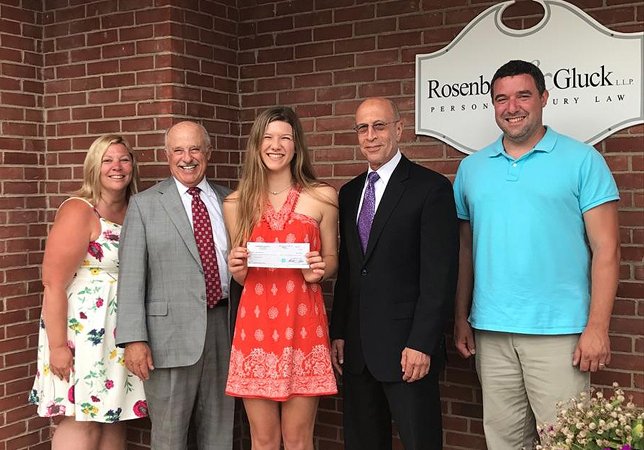 Babylon, NY - August 11, 2017 - 17 year-old Cailin MacQuarrie, a 2017 graduate of Babylon Junior-Senior High School, has big plans for her future; an aspiring surgeon, she has already been accepted into the Pre-Med program at Boston University, but as most young people these days are realizing, the cost of higher education is continually growing, and even a little bit of help can make a huge difference.
While researching available scholarships, one being offered via an essay contest sponsored by Long Island-based personal injury law firm Rosenberg & Gluck, LLP – the $5,000 Road to Safety Scholarship, which required essays from participants on the perils of distracted driving – caught Cailin’s eye in particular.
“I was looking through scholarship matches online one day and found the contest from Rosenberg & Gluck,” she said. “I went to their website and read more about it, and right away I knew I had something I could write about.”
For Cailin, participating in the Road to Safety Scholarship contest was more than simply a means to raise funding for school; it was also a way for her to address a topic very near and dear to her, as a distracted driver one day many years ago had a profound and tragic effect upon her and her entire family.
Distracted driving is exactly what the name implies; it’s anything that can pry the attention of anyone operating a motor vehicle away from the task of safely navigating the road – even for a moment – and this results in tragedy on a daily basis, according to reports. Types of distractions can vary wildly, but typically includes actions such as texting and other cell phone use; drinking and drugs, while not as commonly associated with distracted driving as they represent impairment as opposed to a diversion of attention, can nonetheless also fall into this category, according to Rosenberg & Gluck partner Ted Rosenberg.
“We’ve seen a tremendous increase in the number of accidents that are due to distracted driving of all sorts. So, through our blogs and Facebook pages, we've been trying to draw attention to it because for many people, they consider this the new drunk driving,” he said. “What people don't realize is that distracted driving has increased dramatically in the past few years...according to statistics, every day eight people are killed and 1,100 are injured due to distracted driving. I've also seen statistics that say distracted driving can actually be eight times more dangerous than drunk driving. Those are astounding numbers.” 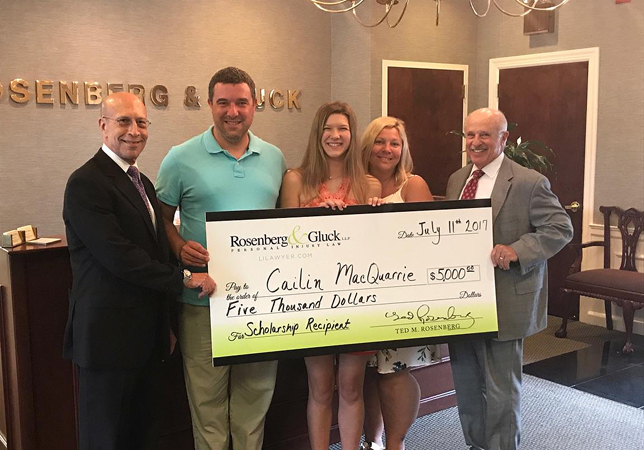 Noting that his law firm – which has been handling accident cases in both Nassau and Suffolk counties for the past 20 years – always had a charitable aspect as far as giving back to the community, Rosenberg said that in order to engage the youth on this serious issue, Rosenberg & Gluck decided to sponsor a 2017 essay contest, with the grand prize being a $5,000 scholarship. Rosenberg noted that he felt it was important to weigh in on the growing problem of distracted driving, and the massive toll it's taking on Long Island.

“We've always tried to focus on local charities to make a difference in our community, because we all live here in Long Island and we wanted to do something that was geared towards Long Islanders,” he said. “In this instance, we wanted to do something that we felt would be a win-win...we wanted to increase awareness of this problem, but also help someone directly at the same time. Luckily for us, the essay winner – Cailin MacQuarrie of Babylon – is a tremendously talented young lady with a lot of drive, and the essay she wrote was a gut-wrenching lesson on just how deadly distracted driving can truly be.”
Cailin’s winning essay chronicled a horrific event that befell her family approximately 10 years ago when the life of her aunt – out running one morning while training for a triathlon – was cruelly snuffed out after being fatally struck on the side of the road by a 19 year-old man who was driving while under the influence of marijuana; the terrible fate of her aunt fueled Cailin’s essay in a process that she said she found cathartic.
“My aunt was a wonderful person...I think the most important thing I would want anyone to know about her is that she was an avid runner and athlete, and it's ironic that she was killed while she was running, while she was doing something that she loved,” she said. “While the Road to Safety Scholarship contest was focused more on distractions such as texting and driving, I took the angle that driving while drinking alcohol or being on drugs is also a form of distracted driving. I noted that people still can drive impaired in ways other than texting…it’s anything that could affect your ability to drive.”
Cailin was informed that she was the grand prize winner in late June, right before she graduated high school; on July 11th, she went down to Rosenberg & Gluck’s Holtsville office to meet with the law firm’s partners and receive her scholarship prize in the form of a check for $5,000.
Due the success of the 2017 Road to Safety Scholarship contest, Rosenberg noted that his law firm is interested in continuing it going forward, albeit with a few minor tweaks to accommodate the large number of very worthy submissions they received this year.
“The contest was a huge success...I’ve lived my whole life here, and my life has been enriched by the people of Long Island, and it feels good to give something back and to help pay for the education of Cailin, who is a fine young woman,” he said. “We had hundreds of students competing this year, and going forward we might change the format slightly…I felt bad that we had some other essays that we felt were also outstanding, and we're talking about possibly giving out first, second, and third place prizes next year.”
Cailin noted that, despite already having been the recipient of several scholarships towards her college education, she felt that the Road to Safety in particular was a source of pride for her, as it allowed her to take a tragic event that had shaken her family to its very core, and transform it into an important lesson for all on the devastating effects that distracted driving can have.
”It’s really gratifying to know that someone saw something that I felt was very important, and that they too felt it was very important,” she said. “I feel this is a vital topic to discuss, and it's obviously something that's really personal to me and my family. I think it's really great that something good could come from this, even though there are such a negative connotations attached to it.”