Houseparty Tour 2015 runs from August 23 to September 13, and includes 11 shows in the northeast and Midwest. 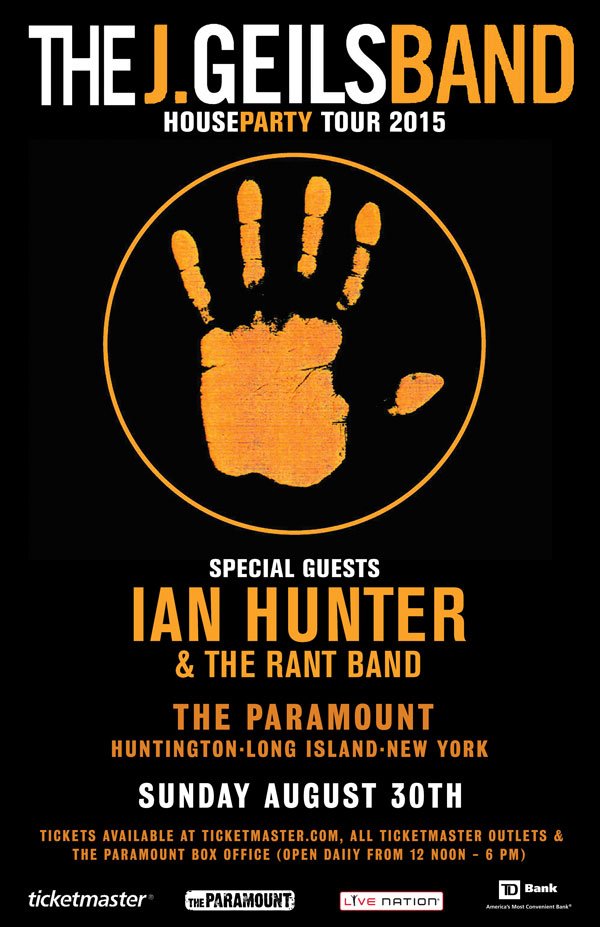 The band formed under the name 'Snoopy and the Sopwith Camels', while Geils was attending Worcester Polytechnic Institute for a couple of semesters. In 1967, the band switched focus, starting to play electric guitar and bass and recruiting drummer Stephen Jo Bladd and fast-talking ex-disc jockey singer Peter Wolf, born Peter Blankenfeld, both from Boston. They became the J. Geils Blues Band, later dropping the word "Blues"  from the band name. The following year, former fan Seth Justman joined as an organist. The group signed to Atlantic Records in 1970.

The J. Geils Band first received FM radio airplay with the live single "First I Look at the Purse". They then began to get AM radio airplay as well with a series of several hit singles in the 1970s, the most successful of which were "Looking for a Love" (1971), "Give it to Me" (1973), a cover version of The Showstoppers' "Ain't Nothin' But a Houseparty" (1973) and "Must of Got Lost" (1974). Later in the 1970s, the band signed with EMI America Records.

In September 2010 it was announced that The J. Geils Band was a finalist nominee for selection to Rock and Roll Hall of Fame, Class Of 2011, but were not selected for induction that year.

The band attracted special attention for its innovative use of the harmonica as a lead instrument. Magic Dick is still regarded as one of the best lead harmonica players in rock and roll.[1]

On August 17, 1971, at a show in the Boston Common, The Allman Brothers Band named The J. Geils Band as their favorite local band. Both bands later played the last show at the Fillmore East. After their initial commercial successes the group seemed destined to be nothing more than a party band, until the release of Monkey Island (1977), followed by Sanctuary (1978).

The group's commercial fortunes improved in the early 1980s, first with the   humorous Love Stinks, then with their success with the Freeze Frame album which included "Centerfold" (#1 for six weeks on the Billboard Hot 100) and then the title cut (#4). "Centerfold" also became a major hit single in the United Kingdom, where it reached #3 in February 1982. Wolf left the group in 1983 over artistic disagreements.

The band went on to record one more album of new material, You're Gettin' Even While I'm Gettin' Odd, after Wolf left. He was not replaced, and Seth Justman took over most of the vocal duties. The album produced one single — "Concealed Weapons", and was not a commercial success. The group then disbanded in 1985 after contributing the title song to the 1985 horror film Fright Night.

The group reunited with Wolf in 1999 for a 13 date tour of the East Coast and upper Mid-west. Rollins Band drummer Sim Cain sat in for Stephen Jo Bladd for this tour, which also saw the band supported by backup singers Rita Hall and Kathy as well as the Uptown Horns (who'd also appeared with the group on their Freeze Frame Tour). After the '99 reunion tour finished at that year's end, Wolf returned to touring with his own backup band with the rest of the Geils band making occasional appearances.

On May 22, 2006 all six original members had a surprise reunion at bassist Danny Klein's 60th birthday party at Scullers Jazz Club in Boston.

On February 19, 2009 the band reunited once again to perform the opening concert at the new House of Blues in their hometowon, Boston, MA, with longtime associate Marty Richards filling in for Bladd this time. Subsequently they played two shows on April 24 and 25 at Detroit's Fillmore Theater, and a second show at the House of Blues, Boston  on April 28.  On July 11, they played the Borgata Hotel/Casino in Atlantic City, New Jersey, selling out the casino’s 2,000-seat Event Center.

On Dec 31, 2009, the original members (with Marty Richards again subbing for Stephen Jo Bladd) reunited for a one-night-only gig at the Mohegan Sun Arena, Uncasville, CT.

On August 14, 2010 The J. Geils Band reunited once again to open up for Aerosmith at a sold out show at Fenway Park.

The 2012 “Houseparty” Tour followed a series of sold-out 2011 shows.  The band toured without John Geils due to an ongoing legal dispute between The J.Geils Band and John Geils' current record label. The label, with whom the band has no relationship, falsely claims ownership of the name “The J. Geils Band.”

In 2014, a DVD of the world famous “Rockpalast” TV series was released entitled “The J. Geils Band House Party”, featuring their performance on the show from 1979.

Late 2014 and early 2015 saw The J. Geils Band on the road supporting the equally legendary Bob Seger & the Silver Bullet band, for select shows on his Ride Out tour, and this gave the band the urge to hit the road again this summer.

Since the band has all legal rights to the use of the name, the legendary rockers continue to tour as The J. Geils Band, with all the energy and musicality that their fans have come to expect.

Houseparty Tour 2015 runs from August 23 to September 13, and includes 11 shows in the northeast and Midwest.