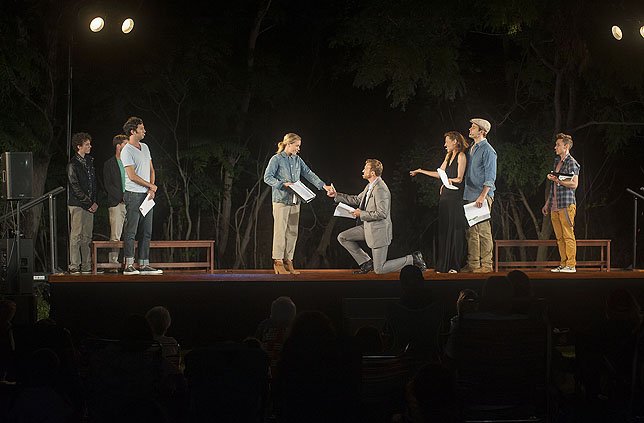 Sag Harbor, NY - August 10, 2017 - Bay Street Theater is pleased to announce the Bay Street Under the Stars series which will present FREE concert readings of plays and musicals in Mashashimuet Park every summer. This year, Bay Street will present Kiss Me, Kate with a book by Bella and Sam Spewack and music and lyrics by Cole Porter, on August 25 & 26 at 7pm. The concert reading will feature a cast of 14, led by Broadway star and Tony Award-Nominee, Melissa Errico, and The Metropolitan Opera star, Richard Troxell. Entry to the concert is FREE and no tickets are required. Bring chairs, blankets and picnics for a night of music and comedy on a balmy summer evening.
The cast will also include Malik Alik (Holiday Inn), Al Bundonis (Ragtime, Whistle Down the Wind), Nick Cearley (All Shook Up), Megan LaFlam (Bay Street’s My Fair Lady), Steve Rattazzi (Indecent), Ryann Redmond (If/Then, Bring It On The Musical, Escape to Margaritaville), John Shuman (La Cage aux Follies), Britton Smith (Shuffle Along, After Midnight), Cecelia Ticktin, David F. M. Vaughn (Shrek The Musical) and Aaron Young.
Kiss Me, Kate is one of the most beloved musicals of all time, featuring a score full of hits by Cole Porter and a hilarious book by Samuel and Bella Spewack. It tells the story of two larger than life actors, Lilli Vanessi and Frederick C. Graham, battling in life and love during a production of Shakespeare’s The Taming of the Shrew.
Melissa Errico – Tony Award-nominee Melissa Errico has established herself as a Broadway star, film/television actress, recording and concert artist. She has starred in the Broadway musicals Anna Karenina, My Fair Lady, High Society, Dracula, White Christmas and Amour; as well as the first national tour of Les Miserables. At The Hollywood Bowl in Los Angeles, she has starred in The Sound of Music, My Fair Lady and Camelot. Her solo CDs include, Blue Like That (EMI/Capitol Records), Lullabies & Wildflowers  (VMG/Universal), Legrand Affair (Ghostlight/Sony) and What About Today? Melissa Errico Live at 54 Below (Broadway Records CD & DVD). She has starred in plays by Shaw, Oscar Wilde and Wally Shawn. Television roles include, the series Central Park West by Darren Star, recurring roles on Stephen Soderbergh's  The Knick (Catherine) and Showtime’s Billions (June). Melissa has collaborated with Stephen Sondheim on the revival of Sunday In the Park with George (Dot/ Marie) at The Kennedy Center, followed by John Doyle’s production of Passion(Clara) for which she was nominated for a sixth Drama Desk Award; and most recently as Leona in the 2016 Encores! production of Do I Hear A Waltz? at City Center. This season, she reprised the role of Sharon in a smash hit off-Broadway revival of Finian’s Rainbow at the Irish Repertory Theatre which was extended many times, received rave reviews and was filmed in January 2017 for The Lincoln Center Library. Melissa has served on The National Endowment for the Arts and has published essays for various magazines as well as The New York Times. She is married to tennis player and sports commentator Patrick McEnroe, and they have three young daughters and a Yorkie named Pepper.
Richard Troxell - Metropolitan Opera Tenor, Richard Troxell’s career has ranged from the starring role of Pinkerton in Martin Scorcese’s Sony Film of Madama Butterfly to being a recurring guest on Jimmy Fallon’s Late Night, to climbing out of the sewers of Seville as Don Jose at the Sydney Opera House in Carmen, to singing the National Anthem for MLB’s ALCS Championship to costarring on Broadway with the beloved Broadway soprano, Melissa Errico.
This dynamic musical couple first joined forces in the critically acclaimed Encores revival of Do I Hear a Waltz by Rodgers and Hammerstein.  Playing 17 year old Romeo followed by 84 year old Galileo all in the same year is a typical season for this versatile singer/actor. Richard Troxell's beautiful lyric tenor voice has been thrilling audiences in leading roles at opera houses and concert halls around the world, among them Los Angeles Opera, Washington Opera, Sydney Opera, Beijing, Houston Grand Opera, New York City Opera, L’Opéra Comique in Paris, Monte Carlo, Teatro Petruzelli, Seville, Philadelphia, Boston Lyric Opera and now the Bay Street Theater.
Bay Street Under the Stars is sponsored by Bridgehampton National Bank, PSEG LI, and Sylvester and Co.
For more information, log on to www.baystreet.org or call the Box Office at 631-725-9500 Tues.–Sat. 11 am–5 pm.
Bay Street Theater & Sag Harbor Center for the Arts is a year-round, not-for-profit professional theater and community cultural center which endeavors to innovate, educate, and entertain a diverse community through the practice of the performing arts. We serve as a social and cultural gathering place, an educational resource, and a home for a community of artists.