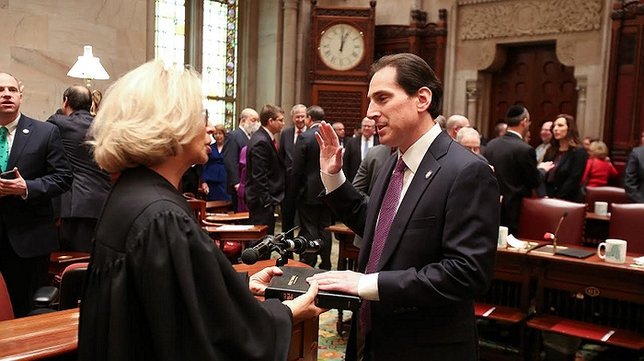 Pharmacist Ira Gross faces prison sentence of up to 25 years; the perpetrators of this complex scheme not only cheated the State Medicaid program out of millions of dollars, but preyed on some of NY's most vulnerable patients.

Riverhead, NY - August 9, 2016 - Attorney General Eric T. Schneiderman today announced the trial conviction of pharmacist Ira Gross, 63, and his shell company, Chaparral Services, LTD.  Both defendants were found guilty yesterday in Suffolk County Supreme Court after a four week jury trial before Hon. Richard Ambro.  Gross was accused of distributing HIV medication illegally obtained from the black market to patients, and faces a state prison sentence of up to eight and one-third to twenty-five years.  Medicaid and others were illegally billed $274 million through this scheme, with Gross personally receiving a profit of $25 million. The convictions were part of the Attorney General’s Medicaid Fraud Control Unit longstanding “Operation Black Market Meds” investigations.

“The perpetrators of this complex scheme not only cheated the state Medicaid program out of millions of dollars, but preyed on some of New York’s most vulnerable patients just to make a quick buck” said Attorney General Schneiderman. “These convictions should send a clear message that my office will not tolerate these types of abhorrent schemes. If you seek to line your pockets at the expense of the health and well-being of New Yorkers, you will be punished.”

In April of 2012, the Attorney General’s Medicaid Fraud Control Unit arrested Gross, the mastermind of the scheme, and three others for distributing HIV prescription medication obtained on the black market through MOMS pharmacy, a high-volume, online pharmacy located in Melville with satellite offices in Manhattan, Brooklyn and other states. MOMS, and its parent company Allion Healthcare, then dispensed the illegally obtained medication to Medicaid recipients, and billed the New York State Medicaid program for the tainted medication.  Dispensing diverted medications endangers the lives of patients by exposing them to drugs of unknown origin and potency and, in some cases, drugs which were mislabeled or potentially expired. The Attorney General also froze millions of dollars from defendants and their cohorts in an asset forfeiture action.

Ira Gross was the architect and brains behind this scheme and served as the broker between the buyer and seller of the diverted medications, taking a massive cut of the profits.  As a licensed pharmacist, Gross understood the regulations of pharmaceutical distribution and knew how to evade them.

In these types of black market schemes, medications are illegally obtained from a variety of sources, such as “buying back” drugs from patients, and are then often rebottled using fake labels and serial numbers, have broken seals, or contain different medications than what’s indicated on the labels.  As a result, the real patients are exposed to potentially adverse drug interactions, overdoses or a decline in their health from not receiving wholesome forms of medications they were prescribed.

Gross, his spouse Lois Gross of Babylon, and their adult children Dakota Gross and Chelsea Gross remain as civil defendants in the Attorney General’s forfeiture action, seeking return of the proceeds and substituted proceeds of the criminal scheme that are held in their names.  That action continues.

Glenn Schabel, the supervising pharmacist and compliance officer for MOMS pharmacy, who pled guilty in March, 2016, admitted that over a four year period he accepted over five million dollars in bribes.

Stephen Manuel Costa, a Florida resident and another co-defendant who pled guilty on an earlier date, incorporated four separate entities as “wholesale” distributors in order to disguise the sale of the diverted medications to MOMS.  Costa procured millions of dollars of black market HIV medications, and sold them to MOMS through his four shell companies, and MOMS in turn dispensed them to its patients, many of whom were Medicaid recipients.   The prescription medications were obtained from the street using various illegal means and in batches which potentially included pills which had been previously dispensed to individuals, stolen from manufacturers, or had expired.

A fourth defendant, Harry Abolafia, who also pled guilty on an earlier date, created false invoices for Costa’s companies—SMC Distributors, Fidelity Wholesale, Optimus Wholesale, and Nuline Pharmaceuticals—in order to make the transactions appear to be legitimate.  In total, on behalf of MOMS Pharmacy, Schabel purchased $274 million worth of black market HIV medications from Costa through Ira Gross.  For brokering the deal, Ira Gross personally amassed over $25 million in illegal profits.  For their efforts, Schabel and Abolafia were paid a smaller portion of the profit: over $5 million, and over $1 million, respectively.

The Attorney General thanks the New York State Office of the Medicaid Inspector General,  particularly its staff of pharmacists and other specialists, as well as the New York City Office of Special Narcotics Prosecutor.  The Attorney General additionally thanks investigators from United States Drug Enforcement Administration, the United States Food and Drug Administration, the United States Department of Health and Human Services, Office of Inspector General, and the Federal Bureau of Investigation as well as investigators from the Florida Department of Law Enforcement and Assistant United States Attorneys from the United States Attorneys Offices for the Southern District of New York and the Southern District of Florida. All, individually and collectively, provided valuable information and assistance during the investigation.