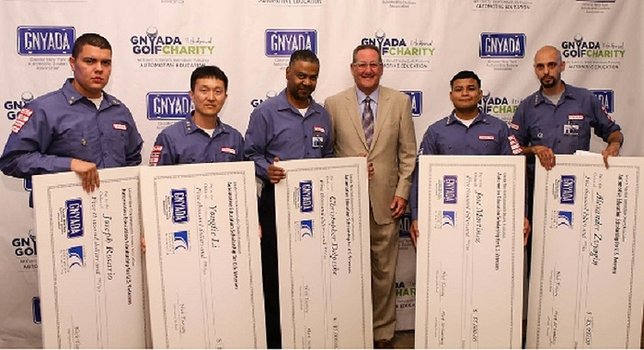 “The scholarships help provide deserving students with the tools and skills needed to complete their education and develop long-lasting careers in the retail automotive industry,” said Mark Schienberg, GNYADA president.

“This year, we are thrilled to recognize five special students who are veterans who have served their country with honor and are now completing their studies in order to join the workforce in the retail auto industry as their favored civilian career,” he continued.

GNYADA started its scholarship program in 2005, when it opened the 90,000 sq. ft. $30 million Center for Automotive Education & Training. The Annual GNYADA Charity Golf Outings has so far raised over $500,000 in scholarships.

A $5,000 Automotive Education Scholarship for U.S. Veterans studying at Lincoln Technical
Institute was presented to each of the following veterans at this year’s event.

Joseph Rosario
A decorated U.S. Army veteran, Joseph was stationed overseas in Korea, where his service earned him the Army Accommodation Medal as well as a Certificate of Achievement. On top of the demands of being a model student, Joseph is also a husband and a father. Clearly not one to shy away from hard work, Joseph’s long-term goals include becoming a franchised new car dealer himself. Joseph received his scholarship in honor of his determination in life, his excellent performance at Lincoln Tech, and his distinguished military service.

Yonglie Li
Li spent five years as a General Mechanic in the U.S. Army, where he was stationed in Korea. As not only a skilled mechanic, but also a multilingual serviceman able to communicate with local forces overseas, Li’s talents made him a unique asset to his team, and helped earn him the Army Commendation Medal. Following his military career, Li enrolled at Lincoln Tech, where he has been a high-performing student with a 3.98 GPA in addition to achieving four ASE certifications so far this year. He is well on his way to achieving his goal of becoming a Master Technician at a franchised new car dealership.

Chris Delpeshe
Chris’s six years with the U.S. Army brought him to Iraq, where, as a field artillery specialist, he earned multiple army recognitions, for his contributions to the global war on terrorism. These recognitions included the Army Commendation Medal, the Extra Mile Award, the Iraq Campaign Medal, and others. At Lincoln Tech, Chris enjoys a perfect 4.0 GPA, as well as rave reviews from his various instructors, who praise his professionalism and the leadership qualities he displays among his fellow students. Chris also spent 17 years as a corrections officer in a federal prison, prior to his military service.

Jose Martinez
During his time with the United States Marines, Jose’s specialty field was the modification and preventative maintenance of military trucks. His service earned him recognitions such as the Marine Corps Good Conduct Medal, the National Defense Medal and the Global War on Terrorism Service Medal. At Lincoln Tech, Jose has a perfect 4.0 GPA and is widely respected by his fellow students and his instructors who laud his dependability. Jose is a committed student and a fierce learner who also has enrolled in BMW&#39;s STEP Program for auto techs. He aspires to use his degree from Lincoln Tech and his deep experience as a military leader and a diesel tech, to become an A-technician at a franchised new car dealership.

Alexander Zvyagin
Alex emigrated to the U.S. from Russia at nine years old. After graduating from Villanova University, where he

majored in Business Administration, he enlisted with the United States Air Force, where he worked with Air Force

Intelligence, Surveillance and Reconnaissance, including work abroad. He too is no stranger to military distinctions,

twice being named Airman of the Year, in his Wing. After his military service, Alex started his own security

consulting company. He has also worked as a natural disaster emergency responder, which brought him to

Brooklyn to provide relief after Hurricane Sandy. Alex has obviously worn many professional “hats” in his life. Last

year, Alex decided to quit corporate life, and turn his favorite hobby ‘working on cars’ into a career. Alex is undoubtedly a Lincoln Tech all-star. He has a 4.0 GPA and a 98% attendance record. His counselors and instructors resoundingly commend his commitment to the field and to the program, and his volunteered mentoring of fellow classmates.

About GNYADA
The Greater New York Automobile Dealers Association represents over 400 franchised automobile dealerships in the metro area of New York, selling more than 550,000 new and used cars each year. Collectively, they inject $39.6 billion into the economy and generate $2.1 billion in tax revenue for New York while helping to sustain a workforce of nearly 65,000 directly and indirectly. A third of these jobs are in the high-paying service department.