New this year is the Tania Bonilla Memorial Scholarship, named after the very talented young woman who grew up playing for Brentwood in the LIJSL. 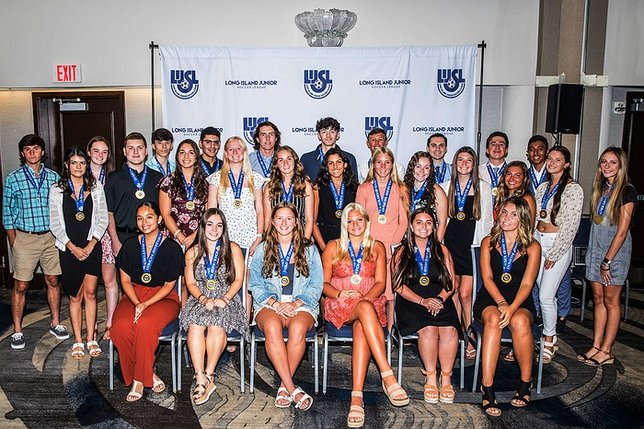 The Long Island Junior Soccer League (LIJSL) is the league with the largest college scholarship program in the Eastern New York Youth Soccer Association (ENYYSA). 32 scholarship recipients, selected based on academic and athletic excellence plus community service, were honored by the league at the LIJSL Scholarship Breakfast recently at the Huntington Hilton. These well-rounded teenagers exemplify the mission of the league and its slogan of “Building Character Through Soccer.”
The LIJSL Scholarship Breakfast has been held at the Huntington Hilton for the past decade except for last year when a more informal socially-distanced celebration took place at the league office in Ronkonkoma. With the return to the hotel, the ceremony followed all current New York State guidelines.
“This is the first large scale event that the LIJSL has held since December 2019,” explained LIJSL Managing Director Steve Padaetz.
New this year is the Tania Bonilla Memorial Scholarship, named after the very talented young woman who grew up playing for Brentwood in the LIJSL. Her ball control skills were exemplary and she played on a boys team that was dubbed “Tania’s team.”
LIJSL Scholarship Chairperson Lynn Scarpati addressed the scholarship recipients when she stated, “This is a very sweet, sweet ending to all your hard work. It’s just an honor to be here today.”
Three of the recipients could not make it because of college commitments. Congratulations to all the LIJSL Scholarship recipients:
With approximately 100,000 youth soccer players––both boys and girls––and more than 25,000 volunteers, the non-profit Eastern New York Youth Soccer Association (ENYYSA) stretches from Montauk Point, Long Island to the Canadian border. Members are affiliated with nine leagues throughout the association, which covers the entire state of New York east of Route 81. ENYYSA exists to promote and enhance the game of soccer for children and teenagers between the ages of 5 and 19 years old, and to encourage the healthy development of youth players, coaches, referees and administrators. All levels of soccer are offered––from intramural, travel team and premier players as well as Children With Special Needs. No child who wants to play soccer is turned away. ENYYSA is a proud member of the United States Soccer Federation and United States Youth Soccer Association. For more information, please log on to http://www.enysoccer.com.