Television host, activist and artist, Abby Martin, will be Tom Needham’s guest this Thursday on WUSB’s the "Sounds of Film." 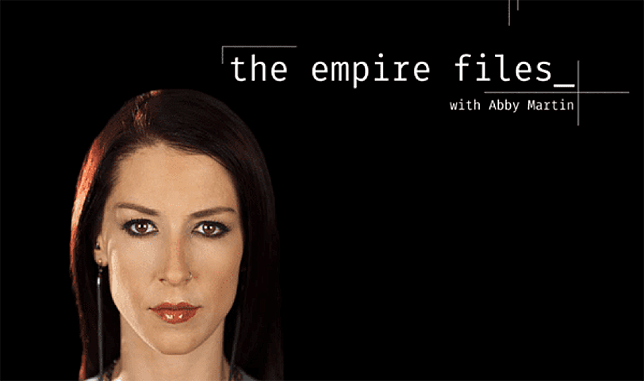 The Empire Files with Abby Martin.

Stony Brook, NY - August 8th, 2017 - Abby Martin, the presenter of the "Empire Files," will join Tom Needham this Thursday at 6 P.M. on WUSB’s the "Sounds of Film." She will be discussing her unique alternative news career, activism and art.
Abby Martin is one of America’s most recognizable and controversial independent female journalists. She is the host of teleSUR’s "Empire Files," an investigative news program which recently featured groundbreaking reporting on Venezuela, Philippines' Trafficking, and the Darknet.  She previously gained international attention as the outspoken host of RT’s "Breaking the Set." The show attempted to cut through the false left/right paradigm promoted by the mainstream media. The program also offered a voice to many Americans shunned by the traditional news networks like Chris Hedges, Noam Chomsky, Ralph Nader, Alex Jones and Naomi Wolf.
Martin has appeared in the documentary "Project Censored The Movie: Ending the Reign of Junk Food News" and co-directed "99%: The Occupy Wall Street Collaborative Film." She is on the board of directors for the Media Freedom Foundation which manages Project Censored.  She is also an accomplished artist who paints, takes photographs and makes collages. Her work has recently been featured at several galleries.
About the Sounds of Film
The "Sounds of Film" is the nation’s longest-running film and music themed radio show.  For the past 30 years, the program has delivered a popular mix of interviews and music to listeners all over Long Island, parts of Connecticut and streaming live on the Internet at wusb.fm.  Previous guests include director John Pilger, Pulitizer Prize-winning author Chris Hedges, Public Enemy’s Chuck D., composer Jeff Beal, Michael Moore, director Barbara Kopple, Wallace Shawn, Josh Fox, the Weather Underground’s Bill Ayers, the "Nation’s" Katrina vanden Heuvel, Laurie Anderson, and "Truthdig’s" Robert Scheer.