Governor Andrew M. Cuomo today announced completion of an $8.3 million project to rehabilitate the bridge carrying the Southern and Heckscher State parkways over the Sunrise Highway (State Route 27) in the town of Islip, ... 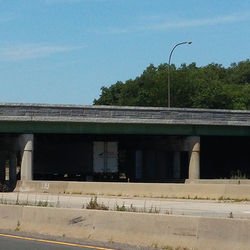 “The Parkway Bridge is an important part of Long Island’s transportation network and by building it back better and stronger, we are ensuring that traffic moves safely and smoothly for many motorists that depend on it,” Governor Cuomo said. “This is another example of the progress we have made in bolstering key infrastructure projects that will support economic activity and keep this region on the move.”

The project included removing and replacing the entire bridge deck, raising the height of the bridge by six inches to improve vertical clearance for vehicles traveling under the bridge, and replacing or repairing all deteriorated structural elements.

New York State Department of Transportation (NYSDOT) Commissioner Matthew J. Driscoll said, “With projects like the Heckscher State Parkway bridge rehabilitation, we are renovating our aging infrastructure and creating jobs while improving safety and the long term reliability of our critical structures. In keeping with the goals of Governor Cuomo’s Drivers First initiative, we made sure the bridge stayed open to traffic while it was being rebuilt to minimize inconvenience for the thousands of motorists who rely on this bridge each day.”

Senator Phil Boyle said, “A sound highway infrastructure is vital to Long Island. I would like to commend the State Department of Transportation for completing this important project which will allow Long Islanders the ability to travel more efficiently and safely through this highly trafficked area.”

Town of Islip Supervisor Angie Carpenter said, “This bridge serves a vital need for our residents and businesses throughout our community. I thank Governor Cuomo for working to rehab this bridge and forge his ongoing commitment to improving the infrastructure in our community.”

Originally built in 1960, more than 100,000 motorists use the interchange bridge each day. Lanes are now open to traffic and new pavement markings are in place.

The construction contractor for the project was Village Dock, Inc. of Port Jefferson, Suffolk County.