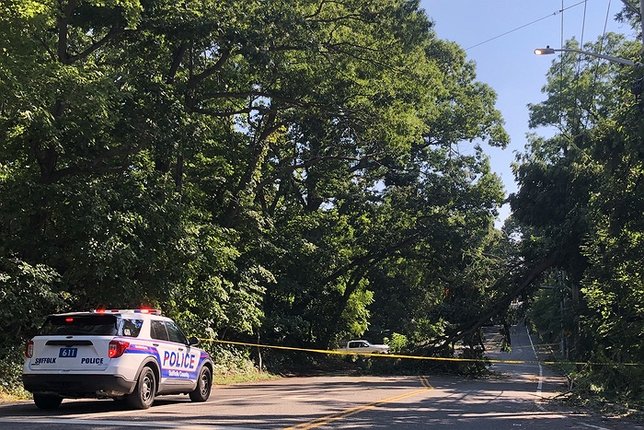 After Tropical Storm Isaias quickly made its way up the coast, it brought damaging winds that brought down trees, closing roads and causing power outages across Long Island. The storm left more than 300,000 people without electricity on Tuesday afternoon.

Communication with the utility was problematic for many residents. The company blamed the issue in Verizon communications systems that were also affected by the storm.

“PSEG Long Island is reliant on Verizon for its internet and telecommunications systems,” the company said in a statement. “Without reliable support from Verizon, our systems cannot perform as they should. PSEG Long Island is actively working with Verizon to address this issue…”

PSEG Long Island said it deployed  more than 2,000 line workers, tree trimmers, surveyors and other personnel to restore service, including crews from outside the region.

Customers took to social media to complain about the poor communication and unreliability of the company’s outage map.

The Long Island Railroad was also forced to shut down service Tuesday afternoon. As of Wednesday morning the LIRR was showing modified service and significant delays on all lines. LIRR said it will continue to run modified service while crews remove tree branches and other debris.

“Reminder: A dark traffic signal means all way stop,” he wrote. “While crews continue to respond to outages as a result of Tropical Storm Isaias, residents are urged to exercise caution and treat traffic light outages as all way stop signs.”