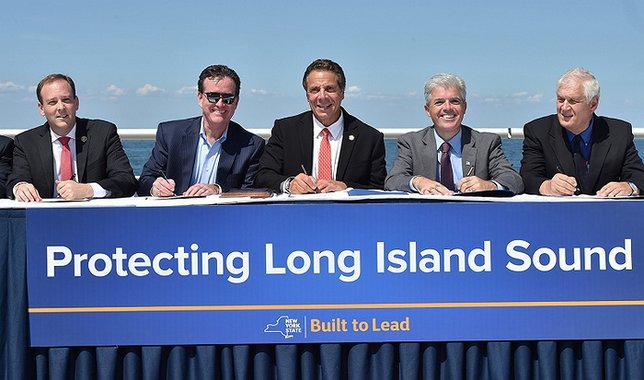 Photo by: Kevin P. Coughlin/Office of the Governor.

In a letter signed by more than 30 federal, state and local elected officials, the Governor provided notice to President Obama and EPA officials that the state will take necessary steps to prevent the EPA from issuing a rule allowing dredged materials from Connecticut to be dumped in the eastern region of the Long Island Sound.

The EPA has failed to show that there is need for an additional disposal site. At an event at Sunken Meadow State Park, the Governor announced that the state objects to any further dumping in the eastern region of the Long Island Sound – a popular tourist and ecologically vital area. This action builds on the state’s goal to eliminate disposal in the open waters of Long Island.

A copy of the letter sent to President Obama and EPA Administrators can be viewed here. 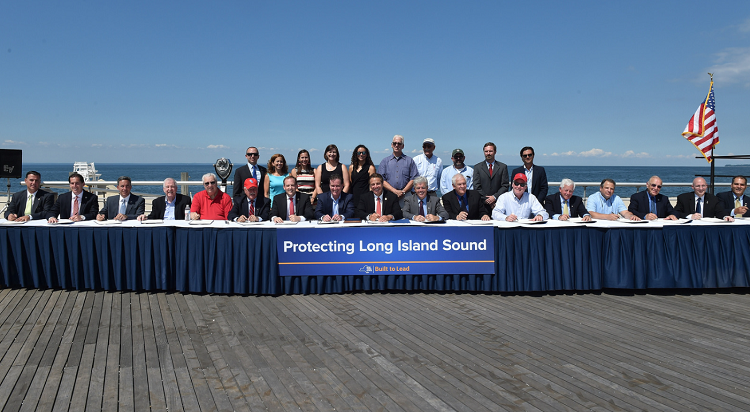 “The Long Island Sound is one of New York’s greatest natural treasures and a vital component of Long Island’s tourism industry,” Governor Cuomo said. “The EPA’s plan to establish a new disposal site not only poses a major threat to this ecologically vital habitat, but impedes our progress in ending open water dumping in Long Island’s waters once and for all. This state is committed to ensuring the Sound remains a viable source of economic and tourist activity and we will continue to take any action necessary to preserve this precious jewel for generations to come.” 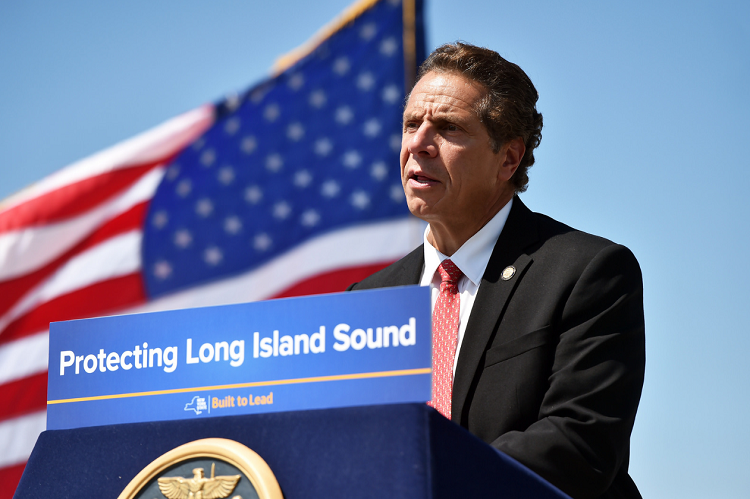 “Long Island Sound is a vital economic and ecological treasure that deserves the utmost protection, not outdated dredging management decisions that undermine its integrity” said Basil Seggos, Commissioner of the New York State Department of Environmental Conservation. “Governor Cuomo has made it clear that New York State will not stand idly by while the federal government walks away from its commitment to reduce or eliminate the disposal of dredge spoils in the open waters of this amazing ecosystem.”

"The Department of State fully supports Governor Cuomo's efforts to protect the Long Island Sound and its rich marine life," said New York Secretary of State Rossana Rosado. "We have long been committed to reducing dredged material in these waters and the current plan contradicts those goals. We look forward to helping preserve the commercial and recreational opportunities the Sound provides for so many New Yorkers."

In 2005, New York State called for, and EPA agreed to, establish a goal of reducing or eliminating dredged material disposal in the open waters of the Long Island Sound. The recent EPA decision to allow new dumping sites in eastern Long Island Sound contradicts this agreement.

The EPA claims that the Central and Western disposal sites do not have the capacity to accept additional dredged materials and has issued a proposed rule, making the short-term dumping sites in eastern Long Island Sound, which are scheduled to expire on December 23, 2016, permanent.

Last month, the New York Department of State and the New York State Department of Environmental Conservation laid out the state’s concerns regarding the plan to establish a new disposal site. A New York State review found that eastern Long Island sound disposal sites are not necessary because there is enough capacity at the Central and Western Long Island Sound sites to meet the needs of future dredged material disposal. Permanent designation of a new dredging site will impede the state’s goal to reduce or eliminate open water disposal in the Long Island Sound.

Over the past six years, New York State has made significant investments to combat the threat to the waters around Long Island and restore its water quality. State and local governments along the Sound in New York have spent nearly $2 billion to build or upgrade sewage treatment plants to restore water quality and protect drinking water from Long Island’s aquifers.

Dredging is necessary to maintain navigable waterways in the Sound, but open water dumping of dredged materials can be harmful to the diverse marine ecosystem. Eastern Long Island sound is a popular tourist area and home to several ecologically important designated Coastal Fish and Wildlife Habitats. Contaminants present in the dredged material can potentially affect the feeding activities of these fish and other organisms, and at extremely high concentrations can kill or injure them. Designating permanent disposal sites in eastern Long Island Sound will impede public access and limit uses such as fishing (recreational and commercial), shell fishing, swimming, and diving.

Congressman Peter King said, “As a recipient of the Long Island Sound Guardian Award, I am proud to support Governor Cuomo’s legal efforts against the US EPA. We must continue our efforts to protect and conserve the environmental and economic benefits of the Sound.”

Congressman Steve Israel said, “Long Island Sound is a national treasure and is vital to our regional economy. I have spent that last sixteen years in Congress fighting to clean up and protect the Sound, and I will not accept the EPA’s plan to designate additional sites for dumping more dredging materials off our shores. We have made too much progress in restoring Long Island Sound to allow this plan to go forward in its current form and I will fight to ensure that Long Island Sound is protected.”

Congresswoman Kathleen Rice said, “The Long Island Sound is an environmental treasure and an economic asset that we have a responsibility to protect,” said Representative Kathleen Rice. “Allowing the permanent dumping of dredged materials in the eastern Sound is both unnecessary and could pose a serious threat to wildlife and local economic activity, and we’re united in our determination to prevent the EPA from implementing this plan.”

Congressman Lee Zeldin, “I'm very grateful of Governor Cuomo and New York State taking this important action to protect the Long Island Sound. Any continuation of open water dumping in the Eastern Long Island Sound is unacceptable after the EPA committed to close these sites at the end of this year. So much progress has been made in saving the Sound, one the nation’s most critical and populated watersheds. It is critical that the EPA and Army Corps do not impede this progress through this misguided proposal. The Long Island Sound shouldn't be a dumping ground, especially when there are many viable alternatives to open water dumping, including recycling and safe disposal on land. I am proud to partner with the Governor and other Long Island elected officials at the state, federal, and local level to express our strong opposition to the continuation of dumping in the Long Island Sound. I will continue doing everything in my power to stop this misguided proposal to allow for the continued protection of the Long Island Sound.”

Senate Majority Leader John J. Flanagan said, “The Long Island Sound is one of the key natural resources that define and shape our region. New York State has made significant investments to help repair decades of damage to this critical water body and real progress is being made, which makes the EPA’s recent proposal to expand the number of dredged material disposal sites in the Sound even more difficult to comprehend. My Senate Republican colleagues and I fully support using whatever resources the state has at its disposal to fight the EPA’s plan and protect the long-term health of the Sound so that it will continue to be an environmental and economic asset for future generations of Long Islanders.”

Senator Tom O'Mara, Chair of the Senate Environmental Conservation Committee, said, "I'm happy to get behind and help support this effort by many of my Senate colleagues and the Cuomo administration to prevent the designation of an eastern Long Island Sound disposal site. I agree that we cannot risk any further deterioration of the quality of the Long Island Sound."

Assemblyman Steve Englebright, Chair of the Assembly Committee on Environmental Conservation, said, “Federal, State, and local governments have spent billions of taxpayer dollars to clean up Long Island Sound and significant progress has been made. During the last year we've seen dolphins and humpback whales return to the Sound attracted by an abundance of bait fish. Continued dredge dumping will make the task of cleaning up the Sound much more difficult. This nationally significant estuary deserves a dredge disposal plan that is consistent with and respectful of the ecological and recreational services it provides. I want to thank Governor Cuomo for his commitment to preserving our state’s legacy of environmental stewardship and am proud to stand with him in preserving this outstanding marine ecosystem.”​ 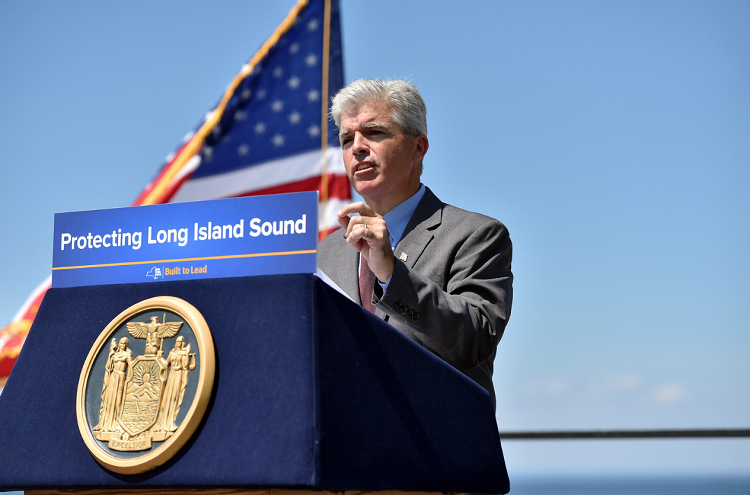 County Executive Steve Bellone said, “The natural beauty of Long Island Sound makes Suffolk County a special destination for fishing, boating, and boundless tourism opportunities. I proudly support Governor Cuomo's letter to the EPA -- sending a message to the federal government that the Sound is ours to cherish, and ours to protect. I thank the Governor for his leadership and I am proud to stand with him in preserving such an important economic and environmental asset for the Long Island region.”

Adrienne Esposito, Executive Director of Citizens Campaign for the Environment, said, “Governor Cuomo is standing up to protect our national treasure—The Long Island Sound. Environmental and civic groups have consistently and rigorously opposed EPA’s dredge dumping scheme. The public loves this water body and has always considered the Long Island Sound to be an extension of our home. We consider the Sound as our front yard, or our back yard but never as a junk yard. We expect the EPA to protect the Sound, not pollute the Sound. This summer we once again see humpback whales and dolphins visiting the Sound, a sign that our restoration efforts are working. A reckless plan to increase dumping of dredged material thwarts continued progress. We are generally thrilled that Governor Cuomo is now leading the charge on this critical issue.”

Erin Crotty, Executive Director of Audubon New York, said, “Audubon New York is grateful for Governor Andrew Cuomo’s leadership in protecting the Long Island Sound, which is one of the richest veins of biodiversity on the planet and essential to the survival of migrating shorebirds and waterbirds of the Atlantic Flyway. Governor Cuomo’s decisive action to prevent the ocean disposal of dredged material directly into Eastern Long Island Sound preserves the quality of life for the people and wildlife of Long Island, while protecting the billions of dollars New York has invested in restoring the Long Island Sound ecosystem.”