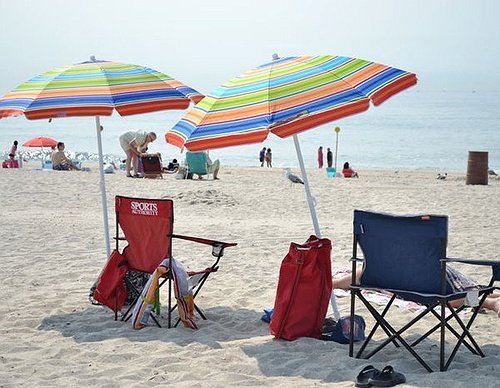 Babylon, NY - August 4, 2015 - Governor Cuomo announced that free Wi-Fi is now available at Robert Moses State Park, a popular Long Island beach with over 3.4 million visitors each year. The free wireless service, which was installed at Fields 2, 3, 4 and 5, is in thanks to a partnership between the State Office of Parks, Recreation and Historic Preservation, Toyota, and American Park Network, and builds on the free Wi-Fi installed last year at Jones Beach, Niagara Falls, Saratoga Spa and East River State Park.

“New York is the proud home to some of the best and most beautiful parks in the nation, and this Wi-Fi expansion will attract more visitors to the great outdoors—boosting tourism and growing the Long Island economy,” Governor Cuomo said. “We will continue to develop these partnerships to make our state park system better than ever before, and I encourage all New Yorkers to explore a new park this summer.”

The service, called “Oh, Ranger!” Wi-Fi, is part of a program made possible through the support of Toyota: Let’s Go Places, with the equipment, installation, maintenance and monitoring being provided at no cost to taxpayers. Visitors at the participating parks access the Wi-Fi in two easy steps: users simply select Oh, Ranger! Wi-Fi under available Wi-Fi networks on their device, accept the standard terms and conditions, and will then be on their way to free Internet access.

State Parks Commissioner Rose Harvey said, “Under Governor Cuomo’s leadership, we are improving the visitor experience and continuing our commitment to upgrading our facilities. We are grateful for our partnership with Toyota and American Park Network to enhance the park’s amenities with this much sought-after service. Whether opting to use Wi-Fi to share real-time photos of friends and family exploring our parks, or accessing apps and maps, having access to this technology is another way to draw people to spend precious leisure time at our parks.”

Dionne Colvin-Lovely, Director, Traditional and New Media, Toyota Motor Sales U.S.A, Inc. said, “Toyota is thrilled to partner with American Park Network and the New York State Office of Parks, Recreation and Historic Preservation to help expand the presence of Oh, Ranger! Wi-Fi™. Over the past year, millions of New Yorkers have visited these connected parks and adding Robert Moses State Park to the network is a natural extension. Toyota welcomes the opportunity to make a difference in local communities by helping to enhance the visitor experience at some of the most treasured open spaces in all of New York State.”

American Park Network Publisher & Editor-in-Chief Mark Saferstein said, “Toyota has set an amazing example of the benefits of public/private partnership. We’re thrilled that their continued support has made it possible to expand this successful collaboration with New York State Parks. Our collective goal is to encourage everyone to get outdoors by providing connectivity at America’s parks, something the public has come to view as an expected utility, just like electricity and running water. We hope other companies will follow Toyota’s lead.”

Under Governor Cuomo's leadership, New York State remains committed to improving and expanding access to outdoor recreation. The Governor's NY Parks 2020 program is a multi-year commitment to leverage $900 million in private and public funding for State Parks from 2011 to 2020. The Governor's 2015-16 Executive Budget allocates $110 million toward this initiative.

The New York State Office of Parks, Recreation and Historic Preservation oversees 180 state parks and 35 historic sites, which are visited by 62 million people annually. A recent study found that New York State Parks generates $1.9 billion in economic activity annually and supports 20,000 jobs. For more information on any of these recreation areas, call 518-474-0456 or visit www.nysparks.com, connect on Facebook, or follow on Twitter.

About Toyota
Toyota (NYSE:TM), the world's top automaker and creator of the Prius and the Mirai fuel cell vehicle, is committed to building vehicles for the way people live through our Toyota, Lexus and Scion brands. Over the past 50 years, we’ve built more than 25 million cars and trucks in North America, where we operate 14 manufacturing plants (10 in the U.S.) and directly employ more than 42,000 people (more than 33,000 in the U.S.). Our 1,800 North American dealerships (1,500 in the U.S.) sold more than 2.67 million cars and trucks (more than 2.35 million in the U.S.) in 2014 – and about 80 percent of all Toyota vehicles sold over the past 20 years are still on the road today.

Toyota partners with philanthropic organizations across the country, with a focus on education, safety and the environment. As part of this commitment, we share the company’s extensive know-how garnered from building great cars and trucks to help community organizations and other nonprofits expand their ability to do good. For more information about Toyota, visit here.