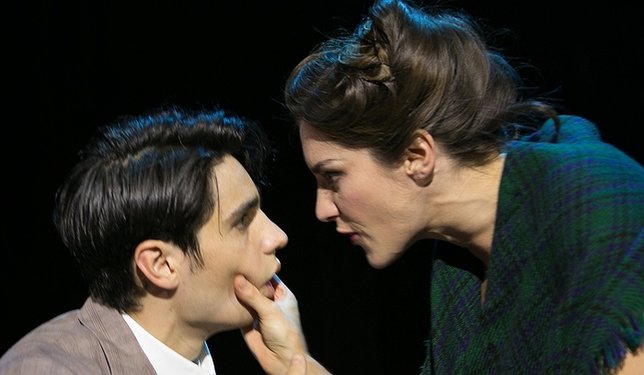 Bobby Conte Thornton and Kelli Barrett in MY FAIR LADY.

Sag Harbor, NY - August 3, 2018 - Bay Street Theater & Sag Harbor Center for the Arts is pleased to announce Bobby Conte Thornton: Blame It on My Youth on Monday, August 20 at 8 pm as part of Bay Street Theater’s Music Mondays concert series. Tickets range from $69 - $125 and are on sale now at baystreet.org and through the Box Office at 631-725-9500.
Bobby Conte Thornton’s theater credits include the popular production of Bay Street Theater’s My Fair Lady directed by Michael Arden. Bay Street audiences may remember his scene stealing number, “On The Street Where You Live,” as the forlorn Freddie, who could only dream of his life with Eliza. Bobby Conte Thornton went immediately from Bay Street to making his highly praised Broadway debut as Calogero, the leading role in the Robert DeNiro and Jerry Zaks-helmed A Bronx Tale – The Musical at the Longacre Theatre. Other credits include Starting Here, Starting Now directed by Richard Maltby, Jr. He also starred in Grease at Paper Mill Playhouse and Les Misérables at the Muny while pursuing his BFA.
He has also starred regionally in Two River Theater's all-male A Funny Thing Happened On The Way To The Forum and the world premiere of Ken Ludwig's A Comedy Of Tenors. Additionally, Thornton debuted his solo show, Blame It on My Youth, at the historic Venetian Room in the Fairmont San Francisco before his sold-out engagement at Feinstein's/54 Below. He made his symphonic debut headlining with the Carolina Philharmonic. Originally from San Francisco, California, Thornton currently resides in New York City.
Music Mondays at Bay Street Theater bring the hottest cabaret acts to the East End! The final 2018 summer Music Mondays event will be Mandy Gonzalez from Broadway’s Hamilton on Monday, August 27 at 8 pm.
The Box Office is currently open daily 11 am – Show Time. Tickets can be purchased by calling 631-725-9500 or by logging on to baystreet.org.
Bay Street Theater’s Music Mondays are sponsored in part by Douglas Elliman Real Estate, GroundLink, and Grenning Gallery.
Bay Street Theater and Sag Harbor Center for the Arts is a year-round, not-for-profit professional theater and community cultural center which endeavors to innovate, educate, and entertain a diverse community through the practice of the performing arts. They serve as a social and cultural gathering place, an educational resource, and a home for a community of artists.