Bay Street Theater Announces Betty Buckley and Rachel York to Be the Legendary "Big Edie" and "Little Edie" in Grey Gardens, The Musical 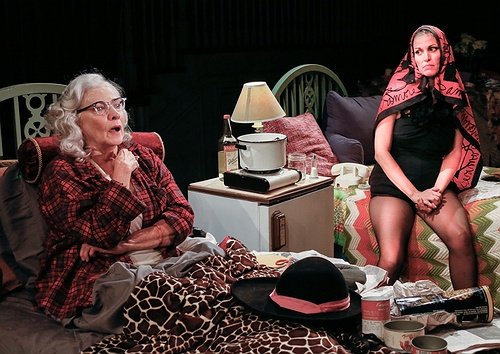 GREY GARDENS tells the story of Big Edie and Little Edie Bouvier Beale, the eccentric aunt and cousin of Jaqueline Kennedy Onassis.  It is based on the 1975 documentary by Albert and David Maysles, which is celebrating its 40th anniversary this year. Set at the Bouvier mansion in East Hampton, this bold musical follows a mother and daughter on their hilarious and heartbreaking journey from glamorous aristocrats to notorious recluses in a crumbling house filled with memories and cats.

“I am very excited to have a dream cast and creative team joining us for GREY GARDENS at Bay Street!” says Scott Schwartz, Artistic Director for Bay Street Theater. “The brilliant Betty Buckley and Rachel York will bring humanity, depth, and humor to Big and Little Edie Beale, women who are part of the shared heart and history of the Hamptons.  They are joined by a cast of dazzling actors and award-winning designers, and we welcome them all.  I am confident that under Michael Wilson’s inspired direction, this production will be a perfect finale for our 2015 season and an event not to be missed.”

A “Pay What You Can” performance will be tomorrow, August 4 at 7 pm. “PWYC” tickets are limited and will be available at the Box Office beginning at 11 am on August 4. Previews are sponsored by Peconic Landing.

FREE STUDENT SUNDAY MATINEES continue this summer with Grey Gardens. High School and College students can receive (1) FREE admission for the 2 pm performance of GREY GARDENS, THE MUSICAL. Student ID must be shown. Based on availability.

TALKBACK TUESDAY with Bay Street’s Artistic Director, Scott Schwartz, and members of GREY GARDENS, THE MUSICAL cast following each Tuesday performance except for preview week on August 5. On Tuesday, August 11 Jerry Torre, the original “Marble Faun” will do a special talkback after the performance with Matt Doyle, the actor who portrays him in the show.

BETTY BUCKLEY
Betty Buckley, who has been called “The Voice of Broadway,” is one of theater’s most respected and legendary leading ladies.  She is an actress/singer whose career spans theater, film, television and concert halls around the world.  She was inducted into the Theater Hall of Fame for 2012.

Betty Buckley won a Tony Award for her performance as Grizabella, the Glamour Cat, in Andrew Lloyd Webber’s Cats. She received her second Tony Award nomination for Best Actress in a musical for her performance as Hesione in Triumph of Love, and an Olivier Award nomination for her critically acclaimed interpretation of Norma Desmond in the London production of Andrew Lloyd Webber’s Sunset Boulevard, which she repeated to more rave reviews on Broadway.

Her other Broadway credits include 1776, Pippin, Song and Dance, The Mystery of Edwin Drood, and Carrie. Off-Broadway credits include the world premiere of Horton Foote’s The Old Friends for which she received a Drama Desk Nomination in 2014, White’s Lies, Lincoln Center’s Elegies, the original NYSF production of Edwin Drood, The Eros Trilogy, Juno’s Swan and Getting My Act Together and Taking it on, The Road. Regional credits include The Perfectionist, Gypsy, The Threepenny Opera, Camino Real, Buffalo Gal, Arsenic and Old Lace and The Old Friends at Houston’s Alley Theatre.  In London she starred in Promises, Promises for which she was nominated for An Evening Standard Award and in 2013 the British premiere of Dear World.

On television, Buckley appeared in The Pacific for HBO and twice on the Kennedy Center Honors.  She also starred for three seasons in the HBO series Oz and as Abby Bradford in the hit series Eight is Enough. She has appeared as a guest star in numerous television series, miniseries and films for television including Evergreen, Roses for the Rich the CBS series Without a Trace, Law & Order: SVU for NBC, ABC Family’s Pretty Little Liars and HBO’s Getting On.

Buckley tours in concert worldwide with her ensemble of musicians and recently was featured in the Royal Albert Hall concert of Follies in celebration of Stephen Sondheim’s 85th birthday. She has recorded 16 CD’s, among them Bootleg: Boardmixes from the Road, Quintessence and Betty Buckley 1967 and the Grammy Nominated Stars and the Moon, Betty Buckley Live at the Donmar. Her CD Ah, Men! The Boys of Broadway was released by Palmetto Records in August 2012.  Her most recent recording Ghostlight produced by T Bone Burnett was released in September, 2014 also on Palmetto Records. She received her second Grammy Nomination for the audio book The Diaries of Adam and Eve.

RACHEL YORK
Rachel York is a dynamic and versatile actress, singer, dancer and comedienne. She is best known for her critically acclaimed Broadway performances in City of Angels, Les Misérables, Victor/Victoria (Drama Desk Award), with Dame Julie Andrews, The Scarlet Pimpernel, Sly Fox with Richard Dreyfuss, and Dirty Rotten Scoundrels. She also turned heads on television with her courageous portrayal of Lucille Ball in the CBS movie, Lucy. Most recently, Ms. York starred as Reno Sweeny in the national tour of the Tony-Award winning production of Anything Goes (Helen Hayes Award). She created the role of Cruella de Vil in the national tour of The 101 Dalmatians Musical; starred as Guenevere in the national tour of Camelot opposite Michael York; and portrayed Lilli Vanessi/Kate in Kiss Me, Kate (US Tour and London’s West End). Off-Broadway Ms. York has starred in The Best Is Yet to Come: The Music of Cy Coleman; Stephen Sondheim’s Putting It Together (MTC, Drama Desk nomination) also with Julie Andrews, Dessa Rose (Lincoln Center Theater, Drama Desk nomination), and New York City Encores! critically acclaimed productions of Gentlemen Prefer Blondes opposite Megan Hilty and Little Me opposite Christian Borle. Favorite regional productions; The Game (a musical adaptation of Les Liaisons Dangereuses); Turn of the Century opposite Jeff Daniels (Goodman Theatre, Chicago); Hello, Dolly! (Boston, IRNE Award); Into the Woods (Boston, IRNE Award); Spamalot; Ragtime; Evita; Summer and Smoke; and The Odd Couple with Jason Alexander and Martin Short. In concert, Ms. York has performed with the New York Pops at Carnegie Hall; the National Symphony and the Pittsburgh Pops under the direction of conductor Marvin Hamlisch; Broadway Showstoppers with Peter Nero and the Philly Pops; The Sound of Music at the Hollywood Bowl with the Los Angeles Philharmonic; the San Francisco Symphony; the Detroit Symphony; the Minnesota Orchestra; the Utah Symphony; the St. Louis Symphony; and the Jerusalem Symphony Orchestra among others. She has also performed her celebrated cabarets For the Love of It and Let’s Fall In Love to rave reviews nationwide. Ms. York has also appeared on several popular TV series including Hannah Montana, Frasier, Reba, Numb3rs, Close to Home, Spin City, and Diagnosis Murder. She is the voice of Bitty in Higglytown Heroes and Circe on The Justice League. Ms. York’s debut solo album, Let’s Fall in Love was named one of the Top Ten Vocal CDs of the year by Talkin’ Broadway. For more information, please visit her on the web. Twitter: @theRachelYork

HOWARD MCGILLIN
Howard McGillin and Betty Buckley will be reunited in this production.  They previously starred together in the original, Tony Award winning production of The Mystery of Edwin Drood on Broadway in 1985.  Howard most recently starred opposite Vanessa Hudgens in the Broadway revival of Gigi, and is perhaps best known for his record-setting run on Broadway in the title role in The Phantom of the Opera. Howard’s career on Broadway includes leading roles in Kiss of the Spider Woman, She Loves Me, The Secret Garden, Anything Goes (Tony, Drama Desk Award nominations), The Mystery of Edwin Drood (Tony, Drama Desk nominations; Theatre World Award) and Sunday in the Park with George. London: Mack & Mabel, Anything Goes. Also Stephen Sondheim’s Bounce (Goodman Theatre, Chicago and Kennedy Center – Helen Hayes Award nomination). Howard has starred in several Encores! presentations including Where’s Charley? and Ziegfeld Follies of 1936. Off-Broadway: It’s a Wonderful Life, I Remember Mama, High Spirits, As Thousands Cheer, La Boheme (Drama Desk Award nomination). National tour: Peter Pan. Regional: Damn Yankees, It Shoulda Been You (George Street Playhouse), The  39 Steps (George Street and The Cape Playhouse). Films: South Park: Bigger, Longer & Uncut; The Swan Princess. Concerts: Ragtime, Follies: In Concert. Solo CD: Howard McGillin: Where Time Stands Still, available online.

JAMES HARKNESS
Is thrilled to be a part of this production! James is currently on Broadway in Beautiful The Carole King Musical. Other Broadway credits include: Aida, The Color Purple, Chicago, and Guys and Dolls. James next project is directing The Color Purple for The Westcoast Black Theatre Troupe.

SARAH HUNT
A graduate of last year’s Juilliard class, Sarah made her Broadway debut last season in Sting’s The Last Ship. Other credits include: 1st National Tour of Spring Awakening (Martha), Middletown, In Arabia We’d All Be Kings, Romeo and Juliet, Cabaret and Twelfth Night.

SIMON JONES
Broadway: The Real Thing, Benefactors, School for Scandal, Getting Married, Private Lives, The Real Inspector Hound, Herbal Bed, Ring Round the Moon, Waiting in the Wings, Blithe Spirit, (also in London’s West End and North American National tour - all with Angela Lansbury).  Films include: Privates on Parade, Monty Python’s The Meaning of Life, Brazil, Twelve Monkeys, Miracle on 34th Street and The Devil’s Own.  Recent TV: OZ (HBO), to Cambridge Spies (BBC), and the portrayal of C.S.Lewis in The Question of God (PBS) – but still best-known as ‘Bridey’ in TV’s Brideshead Revisited and ‘Arthur Dent’ in The Hitchhiker’s Guide to the Galaxy (radio, TV & stage versions). Award-winning Narrator of Audio Books and served for 12 years as co-Artistic Director of TACT, Off-Broadway theatre company.  Jones was also in Bay Street Theater’s production of Quartet  in 2006 with Kaye Ballard and Sian Phillips.  Details online.

GRACIE BEARDSLEY
Gracie Beardsley is thrilled to spend her summer in Sag Harbor working at Bay Street Theater!  She was most recently seen in How the Grinch Stole Christmas at The Theater at Madison Square Garden. Other regional favorites include The Sound of Music (Paper Mill Playhouse), Mary Poppins (Fireside), and Into the Woods (Kids of the Arts). When not performing, Gracie loves to bake, do voice overs, video blog, travel, and spend time with her family and friends.

DAKOTA RILEY QUACKENBUSH
Dakota Riley Quackenbush is a nine year old resident of East Hampton attending the John Marshal Elementary School. She has appeared in the East Hampton YMCA showcases under the vocal direction Lucy Carracappa-Gordon. She has appeared as Tiny Tim’s sister in a Spectacular Christmas Carol and Tap: An Evening of Rhythm produced by our fabulous variety show at Guild Hall.

The 2015 Mainstage Season is sponsored in part by New York State through the generosity of Assemblyman Fred Thiele and State Senator Kenneth P. LaValle; the New York State Council on The Arts, a State Agency; Town of Southampton; The Harold and Mimi Steinberg Charitable Trust; The Shubert Foundation; and fully or partially funded by the Suffolk County Executive’s Office. Adrianne and Jerry Cohen are Associate Producers. Additional support comes from the Joseph Stein New Musical Fund and The New Directions Fund. Preview weeks are sponsored by Peconic Landing. GREY GARDENS is also sponsored in part by Baron’s Cove. Beach Magazine is sponsoring the August 23rd evening performance. For more information about Bay Street Theater log on to www.baystreet.org.