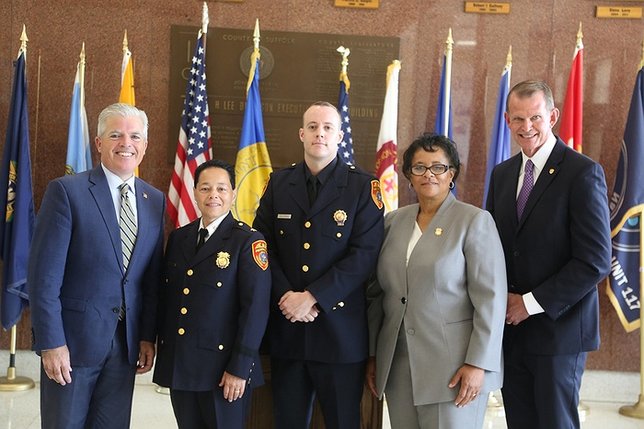 Steve Bellone (left) announced the promotions of three Chiefs, one Inspector and one Detective.

Suffolk County Executive Steve Bellone has announced the promotions of three Chiefs, one Inspector and one Detective. Among the various promotions is the first Hispanic Chief, Milagros Soto. Inspector Milagros Soto has been promoted to Deputy Chief of Internal Affairs, a one-star chief title, and will oversee the integration of the Suffolk County Human Rights Commission into Internal Affairs Investigations, as laid out in the County’s Historic Police Reform and Reinvention Plan.
“We have been laser focused on increasing diversity in all ranks of the SCPD. The promotion of not only the first Hispanic female, but person of color to Chief follows our historic detective level promotions, where 33 percent of the officers promoted were women and individuals of color,” said Suffolk County Executive Steve Bellone. “The positon of Chief is absolutely critical to public safety, and these individuals being promoted today will continue the department’s efforts to make Suffolk County one of the safest communities in the nation.”
“I have known Milagros Soto for her entire career and I believe that her integrity, dedication and talent make her the right person to oversee our Internal Affairs Bureau,” said Acting Police Commissioner Stuart Cameron.  “She has extensive experience working in our Internal Affairs Bureau and her first-hand knowledge of our reform plan will allow her to oversee our integration with the Human Rights Commission as detailed in our police reform plan.”
Chief Soto is a 33-year department veteran. Soto was promoted to inspector in 2019 and was assigned to the Office of the Commissioner where she oversaw the Community Relations Bureau, the Public Information Bureau and was the liaison to the District Attorney’s Conviction Integrity Bureau. Most recently, Chief Soto served as the Commissioner’s Liaison to the Police Reform and Reinvention Task Force and is currently the Department Coordinator for the Implementation Phase of the reform plan. During her more than three-decade tenure, Soto has served as Deputy Commanding Officer of the Third Precinct, Deputy Inspector, and Captain in the Internal Affairs Bureau where she lead the Internal Affairs Investigators into former Sgt. Scott Greene, who was convicted for targeting Hispanic drivers.
In addition to the promotion of the first Hispanic Chief, the promotions include Deputy Chief Christopher Hatton to Chief of Operations, a three-star chief title, Deputy Chief Gerard Hardy to Assistant Chief of Patrol, a two-star chief title, Deputy Inspector Alexander Crawford to Inspector, and Officer Chris Racioppo to Detective. Chief Robert Waring, who was recently named Chief of Operations, will become Chief of Patrol following the retirement of Chief Robert Brown.
Earlier this year, Suffolk County Police Officer Christopher Racioppo was stabbed while attempting to apprehend a drunk driver in Patchogue. Officer Racioppo was stabbed in the leg by Jonathan Nunez as he was attempting to evade arrest for DWI after causing a motor vehicle crash. Bleeding profusely and teetering dangerously close to losing consciousness, Racioppo was given a fighting chance due to the efforts of good Samaritans, Guillermo Sandoval, a United States Marine, and retired NYPD Officer Frank Recupero, and responding Fifth Precinct personnel, including Sgt. Frank Samartino, Sgt. Nick Blaschuk, Officer Taylor Herbst, Officer Christopher Morris, and Officer Jarrett Hanwright.
“Officer Racioppo is nothing short of a hero,” said Suffolk County Executive Bellone. “Four months ago Officer Racioppo was within seconds of losing his life, but today Officer Racioppo has made a miraculous recovery and will return to the Department as Detective Racioppo.”
Officer Racioppo will be promoted to detective in anticipation of his return to duty.