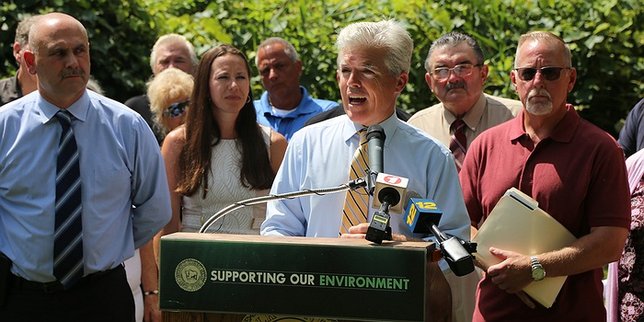 Suffolk County, NY - August 2, 2018 - Suffolk County Executive Steve Bellone today signed a resolution that will appropriate $1 million in County Water Quality Projection funding towards the completion of the Carmans River Fish Ladder Project, the only remaining barrier to fish passage on the Carmans River. The project will transport migratory fish safely and effectively across the stream barrier while protecting public welfare concerning flooding and existing infrastructure.
“Healthy fisheries are critical for the Long Island economy and this project will improve the quality of our waterways,” said Suffolk County Executive Bellone. “The investment in a fish ladder will ensure there is an abundance of fish while returning the river to its natural habitat. I thank our partners at the New York State Department of Environmental Conservation as well as Legislators Sunderman and Browning for their partnership in bringing this project to fruition.”
“DEC welcomes Suffolk County’s investment in improving fish habitat along the Carmans River. As one of Long Island’s Wild, Scenic and Recreational Rivers the Carmans has long been a top destination for anglers,” New York State DEC Commissioner Basil Seggos said. “Once this ladder is completed it will open up approximately six miles of river and lake habitat for alewife, eels and various trout species. The work builds upon work done by DEC and the New York State Department of Transportation which installed a fish ladder near Hards Lake which jump started the movement of these fish species through one of Long Island’s most important river systems.”
The Carmans River originates in the hamlet of Middle Island and flows into the Great South Bay, spanning 10 miles and utilized by residents for hunting, fishing and other recreational activities. The first eight miles of the river is freshwater, and the surrounding watershed is environmentally and ecologically significant on a local and regional scale, with more than a dozen ecological habitat types supporting a diversity of species. In addition, the Carmans River is one of Long Island’s four major river systems that include Connetquot, Nissequogue and the Peconic, and flows through the Central Pine Barrens. The first eight miles
The construction of dams and other barriers have prevented fish species in the Carmans River the ability to migrate between fresh and salt-water habitats, critical to their growth. Historic mill structures on the north side of the river made it difficult to install the original plan of a prefab ladder without disturbing the integrity of the historic structures. The current design integrates a high-pressure natural gas line and will not disturb the dam. The fish ladder will also allow access for alewives and blueback herring, brook trout, and the American eel to swim upstream to spawn, contributing to the growth of the species and the health of the marine environment.
The New York State Department of Environmental Conservation earlier this year awarded Suffolk County a $200,000 grant that will be utilized towards the construction of the fish ladder. The Carmans River Fish Project is expected to begin construction in February 2019 and coincide with the time that the water ha been drawn down for a concurrent Town of Brookhaven project.
Suffolk County Legislator Rudy Sunderman said: “I am happy to announce to the residents of Yaphank, the long wait is over and construction of the fish ladder at the Yaphank Avenue Culvert has officially been signed into law. Since taking office, I’ve worked tirelessly to see this long awaited project come to fruition. This fish ladder is the final link that connects Carmans River and the Yaphank Lakes and will allow fish to migrate from the Bay to Upper Lake. Thank you to my colleagues on the Legislature, County Executive Bellone, Councilman Michael Loguercio, Yaphank Historical Society, Coalition to Save the Yaphank Lakes, and Yaphank Civic Association for working together to get this project underway.”
Former Suffolk County Legislator Kate Browning said: “As a term limited legislator, there is always concern about projects that are not completed as you leave. I want to thank County Executive Bellone for making this a priority and finishing the project that I started for the Yaphank community.”