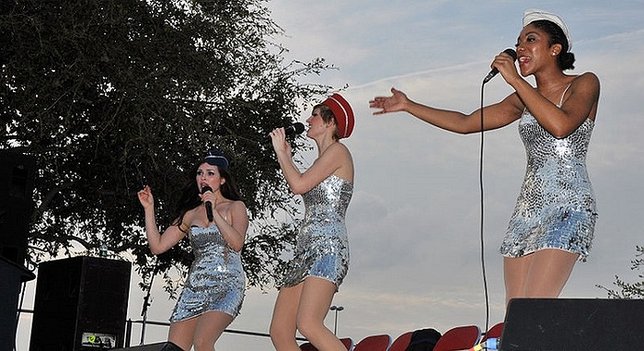 East Meadow, NY - July 29, 2016 - Nassau County Executive Edward P. Mangano today announced that Eisenhower Park’s Harry Chapin Lakeside Theatre will host the Salute to Veterans Concert starring Tony Orlando and the USO Liberty Bells on Saturday, August 6th. The program will begin with ceremonies conducted by the Nassau County Veterans Service Agency, when the 2016 Distinguished Service to Veterans awards will be presented to individuals who have shown extraordinary support to the veteran community. The concert will begin with the USO Show Troupe at 7:30 p.m., followed by Tony Orlando at 8:00 p.m.

No entertainer can move and excite an audience like Tony Orlando. One of America’s most endearing and enduring stars, Tony and America recently celebrated the 30th anniversary of his recording of Tie A Yellow Ribbon ‘Round The Ole Oak Tree. Tony brings to the stage warmth and exhilarating energy that electrifies an audience. From million selling records (five number one hits), a popular television variety series, movies and Broadway (Barnum and Smokey Joe's Cafe) Tony Orlando has conquered every facet of show business.

The officially chartered USO Show Troupe performers travel throughout the world performing for service men and women, their families, veterans and audiences that actively support the troops here and abroad. The USO Show Troupe is part of this American tradition that began with the muddy camp shows of the South Pacific 72 years ago.

About Eisenhower ParkEisenhower Park is located in East Meadow, with entrances on Hempstead Turnpike and Merrick Avenue. As one of the largest public spaces in the New York metropolitan area, Eisenhower Park offers a full range of athletic and family activities, including one of the finest swimming facilities in the U.S., three world-class golf courses, dozens of athletic fields and courts, picnic areas, playgrounds, fitness trails and more. For further information, contact the Parks Public Information Office at: (516) 572-0200 or visit the Nassau County Parks, Recreation and Museums website.