Bellone: "Eleanor Lingo’s kindness, compassion and commitment to helping others demonstrates how ordinary residents can have an extraordinary impact in touching the lives of others." 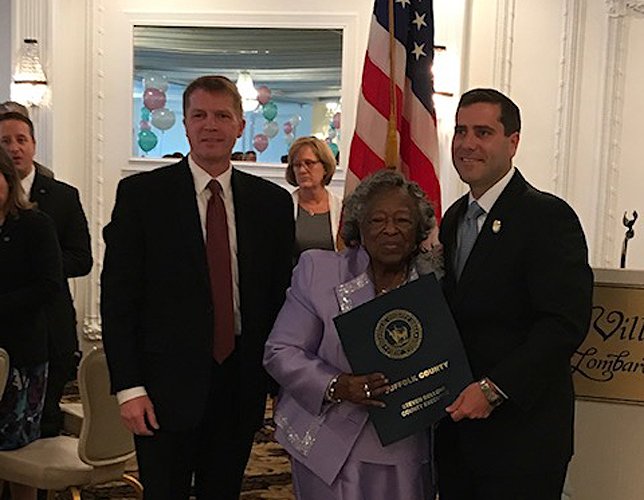 Suffolk County, NY - July 31, 2017 - Suffolk County Executive Steve Bellone recently honored Southold resident Eleanor Lingo as Suffolk County’s Senior Citizen of the Year. The annual award recognizes a senior citizen who has made significant contributions to their community either as an advocate, role model, volunteer or community leader.
“Eleanor Lingo’s kindness, compassion and commitment to helping others demonstrates how ordinary residents can have an extraordinary impact in touching the lives of others,” said County Executive Bellone.  “As trail-blazer for African-American women on the East End, she unknowingly helped to break down barriers for many Suffolk County residents today.”
Eleanor Lingo is a Southold native and was born to George and Ann Morris, who were among the first African-American families to settle in Southold.  After graduating from Southold High School in 1944, Mrs. Lingo found employment in F.W. Woolworth in Connecticut, where she became the first woman of color to work on the company’s sales floor.  After returning to Southold in 1954, Mrs. Lingo became the first woman of color to join the business office of Eastern Long Island Hospital.
Mrs. Lingo is currently is an active member of the Southold community as she volunteers for a variety of community groups, including the town’s anti-bias task force, Community Action Southold Town, Peconic Senior Citizens Club, Southold Town Senior Services and other organization.
In addition, Mrs. Lingo was previously honored for her goodwill towards a forgotten slave whose identity remains unknown.  Starting in 1954, Mrs. Lingo anonymously placed flowers on the grave site of a women identified as “Negro slave lady” every year in the cemetery near First Presbyterian Church.
Mrs. Lingo lives in Southold with her husband of almost 50 years, O.D. Lingo.