Halloween is the 2nd biggest holiday in America, with Christmas coming first; its spooky adversary is gaining up and it shouldn’t surprise anyone that there are people who are ready to get scary early. 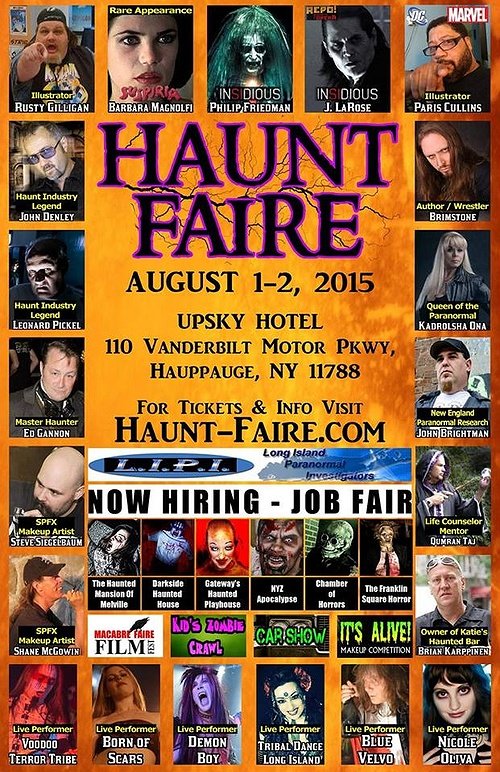 Hauppauge, NY - July 31, 2015 - Halloween is the 2nd biggest holiday in America, with Christmas coming first; its spooky adversary is gaining up and it shouldn’t surprise anyone that there are people who are ready to get scary early. The consumer base is there and a Long Island entertainment company, TwitchTwitch Productions, is seizing the opportunity and offering a weekend of Halloween fun for the whole family with their “Haunt-Faire” event at the UPSKY Hotel in Hauppague this August 1st and 2nd.

Haunt-Faire started as an event to promote employment of actors for a growing number of new and established haunted attractions on Long Island. A place where all haunts could come together, promote one another and find new blood to join their team this holiday season but, as expected the event grew to such heights with the addition to seminars, costume and makeup contests, panel discussions, celebrity guests like Nick King of  “Sinister 2”, Philip Friedman of the successful “Insidious” franchised films, John Brightman who appeared in “Ghost Adventures” and “The Haunted”, Brian Karpinnen owner of “Katie’s of Smithtown”. There is paranormal investigations and kids zombie crawl, even a film fest put on by TwitchTwitch Productions’ own Macabre Faire Film Festival. Haunt-Faire was something more than the creators expected it to be and it is growing into a monster. Vendor tables have sold out, ticket sales are on the up and excitement is growing. If you’re worried that this might be too edgy for you and your family, don’t!

“All is not blood and guts at this unique early celebration of Halloween, this event is open to all ages and lovers of all things haunted and fun” says creator of Haunt-Faire, Elsie Ginsberg. “Long Island needs something like this, Halloween is huge out here! Haunted attractions are growing, there are new haunts every year and with Long Island’s history of urban legends, investigations in the paranormal, the amount of horror films shot here or real events that inspired horror film directors and writers…It is just too good an opportunity to pass up” Ginsberg added.

Ginsberg and her team at Twitch Twitch Productions are no strangers to weird fun. Her group has held many events throughout the years on Long Island, which garner a lot of traffic and media attention. Ginsberg and her team started with the Macabre Faire and Macabre Faire Film Festival, they had a live theatrical show with their Living Dead Mafia play and are branching off into anime and fantasy with their Immortal Con event this October. It is safe to say, if you want a good time, love horror, Halloween and are looking for fun, Haunt Faire is the place to be this summer.

Haunt-Faire will have a limited run, Saturday and Sunday, August 1st and 2nd.  The show is located inside the UPSKY Hotel, at 110 Vanderbilt Motor Pkwy, Hauppauge, NY 11788.

Additional information and on-line ticket sales can be found at www.Haunt-Faire.com For interviews, video, or additional information, please contact Will Puntarich at Paradise Advertising INC and Public Relations (516) 666-7137 or Will@ParadiseAdsNY.com.