For the first time in its 34-year history, the William Floyd Navy Junior Reserve Officer Training Corps (NJROTC) has been designated a “Distinguished Unit” for the NJROTC Area 4. 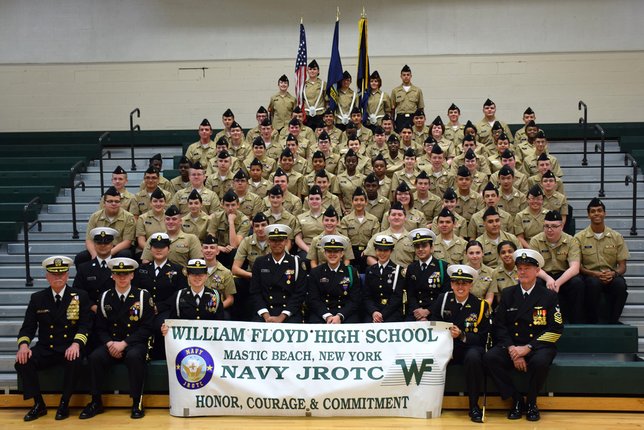 Mastic Beach, NY - July 30, 2015 - For the first time in its 34-year history, the William Floyd Navy Junior Reserve Officer Training Corps (NJROTC) has been designated a “Distinguished Unit” for the NJROTC Area 4. This designation, only one of 17 awarded for the 2014-2015 school year, is based on superior performance and outstanding achievement in academics, competitions, cadet involvement and community service. Area 4 includes 57 units from the northeastern part of the United States – Connecticut, Delaware, Massachusetts, Maine, New Hampshire, New Jersey, New York, Pennsylvania, Rhode Island and Vermont – as well as units in Italy and Spain.

“This prestigious award is earned by only 30 percent of units nationwide and abroad,” said Commander Jay Tweed (USN Ret.), Senior Naval Science Instructor, William Floyd High School. “We had a great year in all areas from academics and competitions to community service,” he said. “Our seniors did a great job acting as mentors to the younger cadets helping to keep the unit focused on achieving its goals.”

Senior Chief Dwight Becherer, Naval Science Instructor at William Floyd High School, added that more than 50 percent of all cadets were on the honor roll this year and 11 were members of the National Honor Society. “This was our best year ever and we look forward to achieving great things in the future.” Of the 15 seniors who graduated with the Class of 2015, 14 will be attending college and one will be serving in the United States Marine Corps.