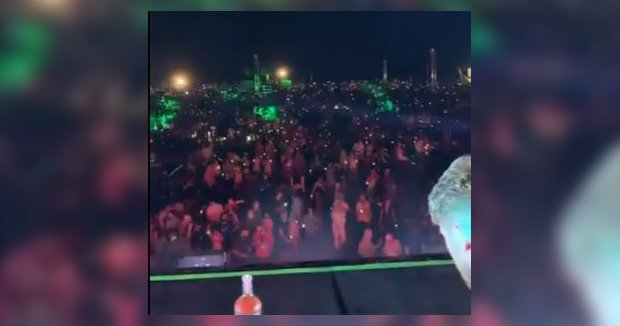 A concert in the Hamptons is causing quite a stir for all the wrong reasons. While concert organizers have said that their event was conducted safely with the proper protocols in place to protect attendees from COVID-19, others have posted videos of the event showing partiers packed in front of the stage as the music duo the Chainsmokers performed.

A tweet that has been circulating on social media and in the news shows a clip of the concert from the stage with revelers standing close together. Although not packed in as you might see at some concerts, the partiers - holding up what looks to be cell phones lit up - are clustered and not separated. The concert was billed as a “drive in” show and was called “Safe & Sound.”

Along with The Chainsmokers, there was a performance by DJ D-Sol, the stage name for Goldman Sachs CEO David Solomon. Tickets were reported to cost up to $25,000 with all profits going to No Kid Hungry, Children’s Medical Fund of NY and Southampton Fresh Air Home.

A statement issued by concert organizers said that they did “ everything in our power to enforce New York’s social distancing guidelines and collaborated with all state and local health officials to keep everyone safe.”

“The video that everyone is talking about was taken from an angle that doesn’t properly convey how careful we were to follow the guidelines created by the CDC,” the statement read.

Governor Andrew Cuomo was none too happy when he saw the concert footage and issued a statement on Twitter vowing to investigate.

“Videos from a concert held in Southampton on Saturday show egregious social distancing violations. I am appalled,” he tweeted. “The Department of Health will conduct an investigation. We have no tolerance for the illegal & reckless endangerment of public health.”