John Venditto of Massapequa, 70, was sentenced to a conditional discharge by Judge Wood. 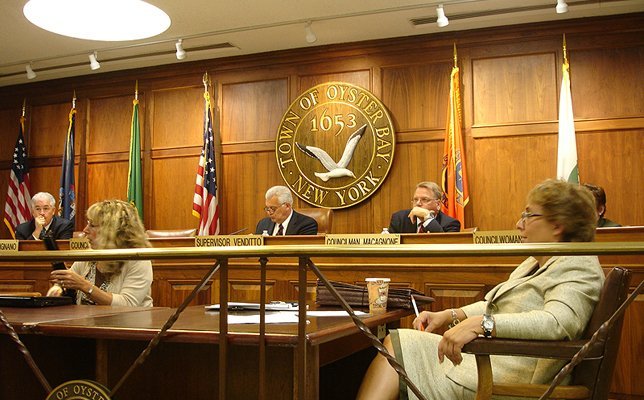 Nassau County District Attorney Madeline Singas announced that former Town of Oyster Bay Supervisor John Venditto pleaded guilty to two public corruption indictment charges.
John Venditto, 70, of Massapequa, pleaded guilty to one count of Corrupt Use of Position or Authority (an E felony) and Official Misconduct (an A misdemeanor) before Supreme Court Justice Charles Wood. The defendant was sentenced to a conditional discharge by Judge Wood and the pleas were taken in satisfaction of Indictment 1020N-17 and 1021N-17.
“Our investigation uncovered pervasive corruption in the Town of Oyster Bay where the powerful and connected used the government to benefit themselves at the expense of the taxpayers they were sworn to serve,” DA Singas said. “This felony plea by former Town Supervisor Venditto sends a strong message that corruption will not be tolerated in Nassau County and my office will pursue these cases aggressively without fear or favor.”
DA Singas said that according to indictment 1021N-17, Frederick Ippolito, who was serving as Commissioner of Planning and Development for the Town of Oyster Bay, received $1.6 million from the developers of Cantiague Commons, a proposed $150 million residential housing complex for seniors.
The property that was to become Cantiague Commons needed the approval of the Town of Oyster Bay Town Board to grant an application to rezone the property for residential use.
As the Commissioner of Planning and Development, Ippolito had substantial control and influence over any potential real estate developments within the Town. Venditto allowed Ippolito to exert control over the developer’s rezoning application and site plan approval, even though he was aware of Ippolito’s impermissible conflict of interest. Ippolito’s financial stake in Cantiague Commons was not disclosed to the public or the other Town Board members who voted to approve the project and relied on the representations of Venditto and Ippolito.
Ippolito failed to report the payments from the developers to the Internal Revenue Service and he was indicted in March 2015 for Tax Evasion.
Ippolito pleaded guilty on January 26, 2016 to one count of Tax Evasion in federal court for tax year 2008 and was sentenced to 27 months’ imprisonment on September 28, 2016.
Ippolito was indicted by a Nassau County grand jury for his alleged actions but passed away before he was arraigned on the charges.
In his allocution in his plea of guilty to the charge Official Misconduct, Venditto acknowledged that during the period of time when he advocated and voted for the approval of a re-zoning application to permit the construction of Cantiague Commons, he knew that Ippolito had a financial interest in the re-zoning application’s approval and nevertheless allowed him to supervise the Cantiague Commons re-zoning application on the Town’s behalf despite that conflict of interest.
According to indictment 1020N-17, after the federal conviction of Town of Oyster Bay Commissioner of Planning Development Frederick Ippolito on Tax Evasion, Ippolito continued to exercise influence over Town matters. Supervisor Venditto directed the Parks Commissioner to hire Individual B to work in the town Parks Department at the behest of Ippolito who wanted to marry Individual B’s mother. Venditto directed the hiring of Individual B, even though the town was not hiring new employees and was openly discussing laying off existing employees because of a financial crisis.
Individual B was paid more than double the rate that similar employees received and was instructed not to discuss his terms of employment. Months later, after Ippolito’s relationship with Individual B’s mother ended, Ippolito directed that Individual B be fired. Venditto agreed to fire Individual B and that the Town of Oyster Bay would fire other employees to divert attention from the firing of Individual B.
Executive Assistant District Attorney Charles Testagrossa, Chief Christine Maloney, Deputy Chief Robert Cavallo and Senior Investigative Counsel Jesse Aviram of DA Singas’ Public Corruption Bureau are prosecuting the cases with the assistance of NCDA Chief Investigator Joshua Genn and Investigator Gavin Shea, and Deputy Chief Daniel Bresnahan and Senior Assistant District Attorney Hilda Mortensen of DA Singas’ Appeals Bureau.
Venditto is represented by Marc Agnifilo, Esq. and Joshua Kirshner, Esq.