It was nearly 17 years ago when a coalition of civic and community groups first envisioned a park and nature trail on what was slated to become a 40 lot subdivision. 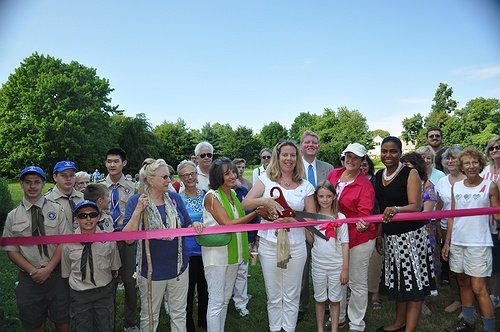 Stony Brook, NY - July 28, 2015 - It was nearly 17 years ago when a coalition of civic and community groups first envisioned a park and nature trail on what was slated to become a 40 lot subdivision.  In the years since, the 34 acre site has been purchased by Suffolk County, and this week the 1.2 mile trail imagined was officially opened to the public during a ribbon cutting ceremony attended by approximately 40 of the original residents who led the preservation fight.

Moments before the trail officially opened Suffolk County Legislator Kara Hahn said, “Today marks the culmination of a common wish driven by the work of so many within our community.  Without their unwavering fight, and a County representative extremely responsive to this effort, the dream of park would have been lost along with the unspoiled beauty embodied in this preserve.”

Former Suffolk Deputy Presiding Officer Vivian Viloria-Fisher whose very first initiative sought to preserve the property in 1999 added, “There was tremendous pressure from developers to build on this pristine woodland. With the help of a community that was committed to saving it, I was able to pass legislation that protects Forsythe Meadow in perpetuity”.  To bookend her tenure, one of Viloria-Fisher’s final bills was to dedicate the Preserve portion in honor of former Legislator Nora Bredes who represented the area from 1992 through 1998.

According to Ms. Barnes, “Within two months we had about 2,000 members and gave each a shocking pink ribbon to tie on their mailbox or tree, symbolizing their solidarity in saving Stony Brook’s last forest and their shock at the alarming destruction that was imminent if the land were not saved. Stony Brook and Setauket were awash in shocking pink, and we saw the ribbons in Smithtown and Port Jefferson, too. People hung them from their cars. It was so obvious -- we knew the community wanted to save the forest.  Former Suffolk County Legislator Vivian Viloria Fisher heard us and nominated the parcel for acquisition.”

“It was a heavy lift in the Legislature, but the Coalition repeatedly lobbied to buy the land, while at the same time showing Brookhaven Town the deficiencies in the development proposal’s environmental impact statement. Children learning about the role of trees in photosynthesis lectured the County Legislature. One legislator, who claimed he’d never before voted for an environmental program, decided to change his vote based on the testimony of a four-year-old boy who offered a poster and oral testimony on how trees make oxygen. Every step forward further galvanized the community. It was a true, grass-roots movement that brought thrilling satisfaction when we attended the acquisition ceremony in 2000,” said Ms. Harrison.

Since the dedication in 2012, the park has undergone a series of improvements made to increase accessibility, including the addition of the trail, kiosks, a small parking area and fencing installed by local Boy Scouts.

“We’re thrilled again today to join our neighbors and thank Legislator Hahn for her dogged pursuit of public access to this County nature preserve. Her work on saving Stony Brook’s last forest dates back to the early days of the Coalition when she joined us and was instrumental in organizing some of our events. Now she has brought in the next generation to help with the trail, and we are optimistic about the park’s future. It is a great day for the community and for Suffolk County to be able to open up the preserve for people’s enjoyment,” Ms. Harrison concluded.

The park is open daily from sunrise to sunset for passive recreational purposes.  Visitors are reminded not to park on the shared driveway or explore areas outside of the Preserve.  If space in unavailable within the designated area, please return to Hollow Road for on-street parking; visitors are not permitted to park on adjoining private property.