The crash six years ago, took the lives of four young women and critically injured four others. 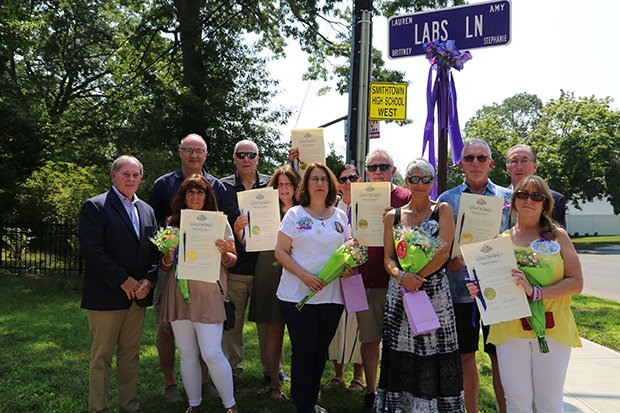 Six years ago, a fatal crash took the lives of four young women from Smithtown and critically injured four others when the limo they were driving in tried to make a U-turn at the intersection of Route 48 and Depot Lane in Cutchogue and was struck by a pickup truck.

This July, officials from New York State and the Town of Smithtown presented the families of the victims with signed copies of the New York State legislation improving road safety, which legislators spent years advocating for, improving limo and bus safety.

Smithtown Town Supervisor Ed Wehrheim thanked legislators for getting the bills passed and the families of all eight victims for their effort in supporting the reform laws.

“Truth be told, all of New York has these eight remarkable families to thank for making our roads safer,” Wehrheim said. “They became the voice for their daughters and their friends… They turned grief, heartbreak and frustration into a life saving effort that will benefit countless generations.”

The two bills presented to the families make it illegal for limousines to make U-turns and the second requires limousines to use commercial GPS devices. Additional legislation that had previously passed includes Seatbelt Requirements which requires motor vehicles converted into stretch limousines (on or after January 1, 2021) to have at least two safety belts for the front seat and at least one safety belt in the rear for each passenger the vehicle was designed to hold. Additionally, the legislation requires all stretch limousines to be retrofitted to include seatbelts by January 1, 2023. The New Commercial Driver's License Requirements for Limousine Drivers bill requires individuals operating limousines carrying nine or more passengers, (including the driver) to have a passenger endorsed commercial driver's license.

“It’s been an honor to advocate for limo safety by your sides,” Wehrheim added. “While these small victories can never replace the lives of our four angels… I can give my word to each of you… this administration will always honor their memory. Lauren, Amy, Brittany and Stephanie will never be forgotten.”