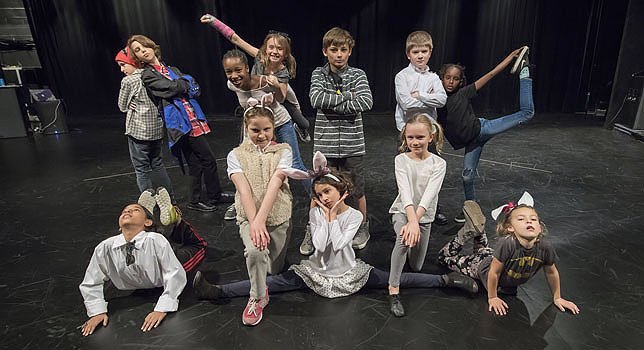 Sag Harbor, NY - July 28, 2017 - Bay Street Theater & Sag Harbor Center for the Arts is pleased to announce Teen Workshops & Master Classes and Summer Theater Camps, continuing in August 2017. Teen weeklong workshops operate from 9:30 am – 12:30 pm daily, and teen master classes are from 12 – 3 pm. Further details about the programs, including age requirements and dates are below. More information can be found on www.baystreet.org/education/.
Teen weeklong workshops are for teens ages 13-18 and operate from 9:30 am – 12:30 pm daily:
Costume design August 21– 25
Students will design original costumes for various plays as well as construct their very own costume piece with costume designer Greg Wilson. Throughout this program, students will learn the fundamentals of costume design and construction.
Greg Wilson is a costume designer as well as choir instructor who was the former costume shop manager at Bay Street Theater for 17 years and has worked with greats such as Julie Andrews and Stephen Schwartz.
Teen masterclasses are for teens ages 13-18 and are from 12 – 3 pm:
Triple Threat Series:
A series of three master classes in all the skills of musical theater- singing, acting, and dance. Take just one of sign up for all three! Each program in the Triple Threat Series is $135. Save with our exclusive deal of $250 for 2 classes or $350 for 3 classes!
Singing July 31
Please come prepared with 16-32 bars of any song to work on if time permits. This class will be presented by Broadway's most sought after vocal coach, Liz Caplan.
Liz Caplan is the current Vocal Consultant on Dear Evan Hansen as well as Disney’s Aladdin and The Book of Mormon. She was the Vocal Supervisor on Hedwig and the Angry Inch on Broadway and has worked with various members of the Hamilton company such as Lin-Manuel Miranda, Chris Jackson and Taran Killam. Many of her students have gone on to win Tony’s such as Ben Platt (Dear Evan Hansen), Neil Patrick Harris (Hedwig), and James Monroe Iglehart (Aladdin) to name a few. Liz will be the Vocal Consultant on the upcoming Disney Musical FROZEN as well as the SpongeBob Musical.
Acting August 7
Please come prepared with sheet music and a lyric sheet for one full song, preferably memorized. This class will be presented by Bay Street Theater’s Artistic Director Scott Schwartz.
Scott Schwartz is currently the Artistic Director of Bay Street Theater and has directed productions on and off-Broadway in major regional theaters across the country, and in the UK and Japan.
Dancing August 14
This class will be presented by Avital Asuleen.
Avital Asuleen is a choreographer, performer, and educator who has worked at various regional theaters as well as performed in the national tour of A Christmas Story.
Speaking Shakespeare August 28
This workshop will provide guidance to help you engage with the character’s emotions as well as interpret and speak Shakespearean verse. This workshop, taught by Paul Hecht, is a great way to prepare if you’re looking to perform a classical text. This masterclass will take place from 10 - 3 pm with a presentation for family and friends at the end. Please come prepared with a memorized monologue or two sonnets.
Paul Hecht is a Tony-nominated actor, and OBIE recipient who has appeared on Broadway as well as around the country in plays by Shakespeare, Shaw, Chekhov, Brecht, etc. He has recorded dozens of books and reads to Pre K for all children in deepest Brooklyn as part of SAG/Aftra's Bookpals program.
Summer theater camps include the following:
Remix Shakespeare August 7 – 11, ages 7-9
Along with a teaching artist, Carolann DiPirro, campers will stretch their imaginations and explore creative ways of expressing the popular themes and language of William Shakespeare.
Carolann DiPirro is a teaching artist as well as professional actor who has studied in London and performed at the Royal Shakespeare Company’s satellite theater, the Almeida.
Play Makers August 14 – 18, ages 4-7
Campers will sing and dance their way through the week while also participating in theater-based arts and crafts. Our teaching artist, Jessica Schwartz, will guide campers through activities inspired by what goes into making a play.
Jessica Schwartz is an arts teacher and visual artist who has worked in New York City, Westchester, and Connecticut.
My Life: The Musical August 14 – 18, ages 9-12
Students will work together with a teaching artist, Kristen Poulakis, to develop ideas for an original script, as well as learn standard songs and choreography. Students will receive instruction in acting, singing, dance, and musical theater history.
Kristen Poulakis is a vocal coach and piano instructor with training in dance and voice from The Boston Conservatory of Music as well as The Berklee School of Music.
Shakespeare Mini-Mainstage August 21 – 25, ages 9-12
Students will embark on a week long journey into Shakespeare’s classic comedy, AS YOU LIKE IT with teaching artist Carolann DiPirro. As students gain basic instruction in acting, they will become familiar with the classic language, characters, and comedy of The Bard. Upon booking, and subject to availability, campers will also receive two free matinee tickets to see Bay Street’s production of AS YOU LIKE IT with their parent or guardian.
Carolann DiPirro is a teaching artist as well as professional actor who has studied in London and performed at the Royal Shakespeare Company’s satellite theater, the Almeida.
Bay Street Theater & Sag Harbor Center for the Arts is a year-round, not-for-profit professional theater and community cultural center which endeavors to innovate, educate, and entertain a diverse community through the practice of the performing arts. We serve as a social and cultural gathering place, an educational resource, and a home for a community of artists.