Cuomo: "Samuel J. Abbott served his nation and died in the service of this state." 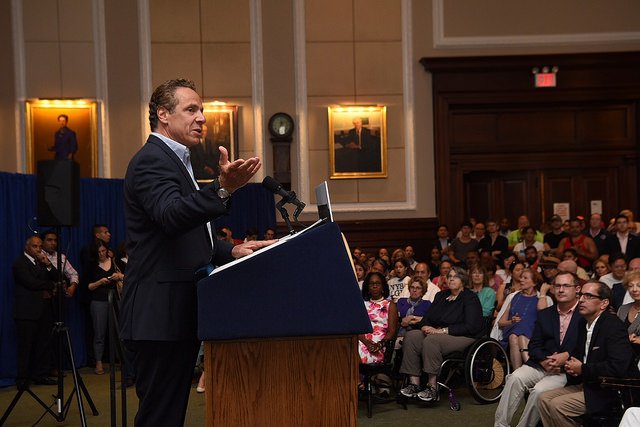 Albany, NY - July 25, 2017 - Governor Andrew M. Cuomo today signed legislation (A7731/S5570) to direct the Office of General Services to install and maintain a plaque in the Capitol honoring Samuel J. Abbott, the watchman who lost his life in the 1911 New York State Capitol fire.
"Samuel J. Abbott served his nation and died in the service of this state, and this plaque will be a fitting honor of his life and the tragic events that claimed it," Governor Cuomo said. "This fire was a significant part of the history of the Capitol, and this measure will help ensure this story continues to be told and Samuel Abbott continues to be remembered."
The historic fire started in the third-floor Assembly Library, quickly spread to the adjacent State Library and engulfed the fourth and fifth floors destroying up to one-half of the square footage on those floors on the Capitol's northwest side, while lower floors sustained mainly water and smoke damage.  With books and wooden shelving fueling the fire, flames rose above the Great Western or "Million Dollar" Staircase to the fourth floor and the two towers.  Burning for several days, the fire was estimated to have destroyed thousands of books and manuscripts and artifacts in the New York State Museum and State Library.
Samuel J. Abbott was a Civil War veteran who worked as a night watchman for the State Library, which was located in the Capitol. On March 29, 1911, while on duty, Mr. Abbott was killed by the fire. He was the only person who lost his life as a result of the fire. He was found in a narrow passageway on the fourth floor with a silver-handled cane at his side. His pocket held a key to a locked door a few steps away, through which he might have escaped. This plaque will memorialize Mr. Abbott's life and his loss of life while serving the People of the State of New York. The plaque will bear the likeness of Mr. Abbott and include a description of his services and sacrifice to the People of the State.
OGS Commissioner RoAnn Destito said, "We at the Office of General Services will be honored to place a commemorative plaque in New York's statehouse paying tribute to Samuel J. Abbott, the 78-year-old night watchman and public servant who died in the Capitol fire of 1911. The Capitol is steeped in history, and I encourage everyone to visit and take a tour of the statehouse to see the plaque once it is placed in Mr. Abbott's honor and learn about all of the other historic features and special exhibits on display in this 19th century, architectural gem."
Senator Catharine M. Young said, "A Civil War hero and long-standing public servant, Samuel Abbott's formal recognition is now a part of New York State law with this official decree today by Governor Cuomo. Watchman Abbott's service and sacrifice for the people of New York, which combined with the Triangle Shirtwaist Factory fire a few days before, began the workplace safety movement in the state and nationally. His life will now be permanently memorialized near the site of his death on the fourth floor in the Capitol."
Assemblywoman Patricia Fahy said, "While our State Capitol is full of history, the one person who sacrificed his life while guarding the Capitol has been overlooked for 100 years, so this plaque will commemorate his commitment and service. I am proud to have sponsored this legislation and I applaud Governor Cuomo for signing this measure into law."