Taxpayers deserve accountability and transparency from their state and local officials. 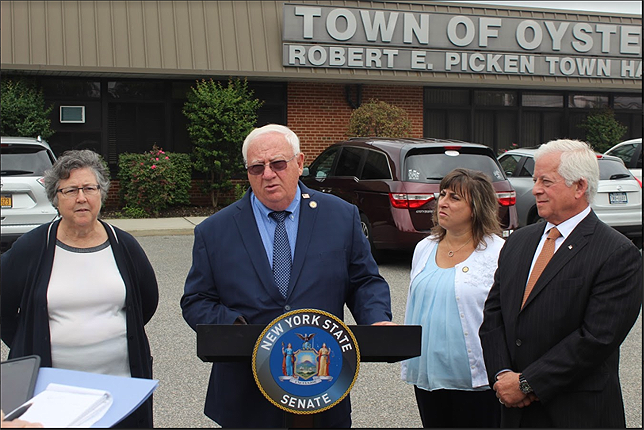 Massapequa, NY - July 25, 2017 - Today, State Senator John E. Brooks and Assemblymembers Charles Lavine and Christine Pellegrino stood together outside of the Town of Oyster Bay’s Town Hall South to demand action on ethics reform on Long Island and in Albany. The Democratic legislators, joined by Common Cause New York, voiced their support for proposed solutions that would end corruption, restore accountability and public trust, and return transparency to elections.
The lawmakers voiced their support for the following legislation and urged their colleagues to take immediate action during the next legislative session:
In addition to the aforementioned legislation, the lawmakers urged voters to pass a constitutional amendment on the ballot in November, which allows a judge to strip or reduce the taxpayer paid pensions of corrupt public officials if they are convicted of a felony related to abusing their official duties.  In a Siena poll, conducted between July 9 -13, 2017, 75% of respondents stated that they supported the proposed amendment.
Senator John E. Brooks said, “For far too long, Oyster Bay and Nassau County have been plagued by scandal and corruption, all at the expense of taxpayers. Long Islanders deserve an open and transparent government that is accountable to them, not the highest bidder or special interests.  It’s time to reverse this pervasive corruption, and restore integrity and trust to our government. I'm proud to partner with Assemblyman Lavine on these necessary solutions to ensure that taxpayer dollars are being used to benefit the public, not self-serving, corrupt politicians."
Assemblyman Charles D. Lavine said, “Nassau County and the Towns of Oyster Bay and Hempstead have been horribly victimized by corruption and abuse of the public trust. I am very pleased to have Senator John Brooks as my partner in the Senate, who will lead the fight to pass these important bills which will protect our hard-pressed and overburdened tax payers to rest assured that our public funds are being used for public purposes and not being used to subsidize the criminal activities of corrupt government officials.”
Assemblywoman Christine Pellegrino said, "I'm embarrassed to explain to my children every time another corrupt politician gets arrested for lining their pockets with our tax dollars. Our property taxes are high enough, without having to pay more in the form of a corruption tax. I'm proud to support the legislation proposed today to help clean up our government and stop corruption."
Susan Lerner, Executive Director of Common Cause New York said, "It is an understatement to say that ethics reform is much needed in New York State. Taxpayers deserve transparency and accountability from their government; this package of bills delivers just that to New York State residents. I applaud Senator Brooks and Assemblymember Lavine for standing with the myriad New Yorkers across the state who are demanding meaningful ethics reform."