Governor Andrew M. Cuomo and Leslie Moonves, President and Chief Executive Officer, CBS Corporation, today announced that the LATE SHOW with Stephen Colbert will remain in New York and will continue broadcasting from the historic ... 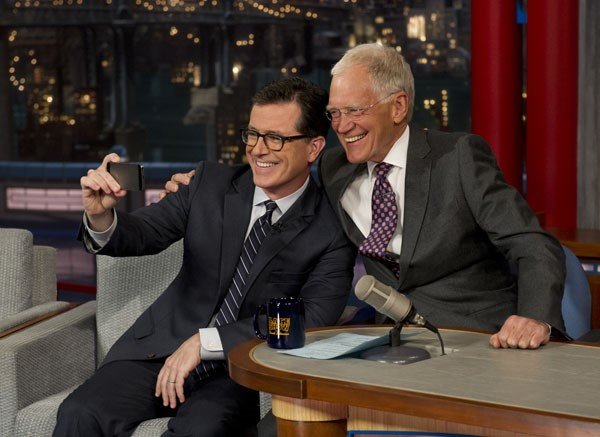 “Today, I am pleased to announce that the ‘LATE SHOW’ will stay in New York, where it belongs. New York has long been an international entertainment leader, and with this commitment from CBS we are beginning the next chapter in that proud history,” Governor Cuomo said. “The television and film industries are thriving in the Empire State – creating jobs and fueling dozens of other sectors across the state. Les Moonves and CBS have made the right decision in choosing to continue investing in New York, and as David Letterman passes the baton to Stephen Colbert, I look forward to watching “The Late Show” from the historic Ed Sullivan Theatre for years to come.”

“We’re thrilled to continue broadcasting CBS’s LATE SHOW from New York and call the Ed Sullivan Theater its home,” said Moonves. “David Letterman has graced this hall and city with comedy and entertainment that defined a generation. When Dave decides to pass the baton next year, we look forward to welcoming Stephen Colbert, one of the most innovative and respected forces on TV, to this storied television theater. I would also like to applaud Gov. Cuomo for all that he has done to keep New York a vibrant and attractive location for all forms of television production. We’re excited to be here in late night for many years to come.”

“The LATE SHOW has always been a New York institution, and we are very excited that CBS has chosen to continue broadcasting from the city that never sleeps,” said Empire State Development President, CEO and Commissioner Kenneth Adams. “Today’s announcement is also great economic news, since the LATE SHOW is making a significant investment which includes approximately 200 jobs and will foster a steady stream of tourism revenue for local businesses and hotels.”

David Letterman, the legendary, critically acclaimed host of the CBS late night series for 21 years, announced his retirement on his April 3 broadcast. The following week, CBS announced that Stephen Colbert, the host, writer and executive producer of the Emmy and Peabody Award-winning “The Colbert Report,” will succeed Letterman as the host of the LATE SHOW. Colbert’s premiere date as host of the LATE SHOW will be announced after Letterman determines a timetable for his final broadcasts in 2015.

Senate Co-Leader Dean Skelos said, "I am pleased that the LATE SHOW and the many laughs it has generated over the years will continue to be produced right here in New York. The LATE SHOW is a uniquely New York brand, and this agreement ensures that the show continues to attract tourists and generate economic activity in our state for years to come."

Senate Co-Leader Jeffrey D. Klein said, "Stephen Colbert is New York, and New York is Stephen Colbert. His show represents the savvy, smarts and good humor of our great city and I'm delighted we were able to keep him and his fantastic team right here where they belong. This action will continue to keep hundreds of good jobs, and no doubt lots of laughs, in the Big Apple, as well as honor the historic Ed Sullivan Theater by supporting improvements that will keep it shining as the New York entertainment and cultural venue has been for nearly 80 years.”

Assembly Speaker Sheldon Silver said, “Keeping the LATE SHOW in New York City is yet another proud declaration that we are thriving as a media and entertainment destination and will continue to do so for many years to come. Our city has long embraced the importance of the entertainment industry in bringing countless jobs and creative opportunities to New York. The LATE SHOW, which has been filmed in New York City’s historic Ed Sullivan Theater for more than 20 years, has a long and proud history of recruiting the industry’s best and brightest talents to help share the day’s news and bring laughter into the homes of thousands of viewers night after night. As Stephen Colbert steps in to continue this much-loved tradition, it is only fitting that the LATE SHOW stays here in New York.”

CBS will be eligible to receive at least $11 million in performance-based Excelsior tax credits over five years to cover eligible costs based on the proposed significant level of investment and job commitments. In addition, ESD will make available up to $5 million grant for CBS to offset renovations at the historic Ed Sullivan Theatre.

Since taking office in 2011, Governor Cuomo has made the attraction of the film and television production and post-production industries, as well as the resulting jobs and economic impact, a key component of his overall strategy to develop New York State’s economy. Since 2011, the Governor has signed several important changes into law to both programs to make New York more competitive in this global marketplace, and the results have been significant. Both programs enjoyed record-breaking years in 2013, bringing billions of dollars in new spending and thousands of jobs into the Empire State. And the stability provided by multi-year funding in particular has encouraged the development of television series production work and long-term investments in infrastructure, yielding thousands of jobs directly and indirectly related to the actual productions themselves.

During calendar year 2013, applications for 181 film productions were submitted and included 124 films, 31 television programs, and 25 pilots and 1 “relocated television show. The impact of these projects includes: