For thirty years, millions of people have driven past the “gateway to the Hamptons.” 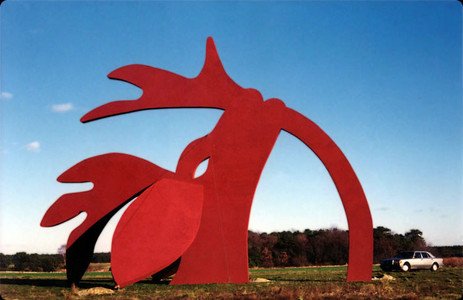 The iconic and abstract Stargazer sculpture on CR 111 in Manorville  is considered the gateway to the Hamptons to so many, who view it as a landmark that says they have almost made it. Time hasn’t been kind to the reddish sculpture that was installed 30 years ago. A recent storm created further damage.

Now, an online fundraiser hopes to raise the money needed to restore Stargazer to its former glory. So far, they have raised almost $10,000 of a $100,000 goal.

David Morris, the man who originally built the sculpture from a design by the late Linda Scott, said he is willing to refurbish the statue and make it stronger.

Stargazer wasn’t originally planned for this spot. It had been designed by Scott for another location but authorities made her move it, according to a story in Dan’s Papers. Ultimately, a farmer offered to have Stargazer placed on his property at the edge of the road so people could appreciate it. And for three decades millions of people have.