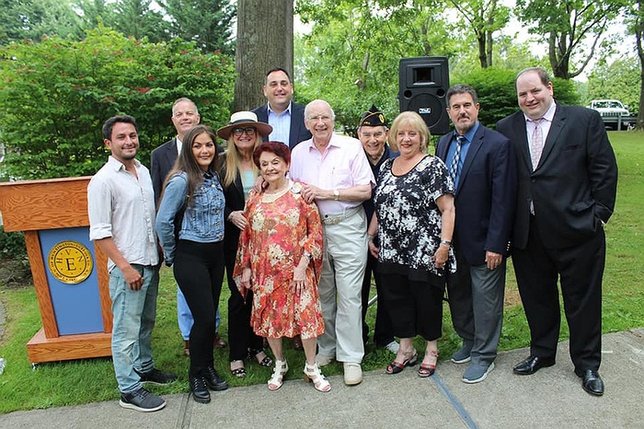 Co-hosts Huntington Town Supervisor Chad A. Lupinacci and Suffolk County Legislator Susan A. Berland were joined by Deputy Supervisor, Councilman Ed Smyth, Rabbi Howard Buechler of the Dix Hills Jewish Center, Rabbi Orrin Krublit of the South Huntington Jewish Center, Commander Harry Arlin and members of Jewish War Veterans Post #488, and guest speaker Rachel Epstein, a Holocaust survivor, at the Town of Huntington’s 10th Annual Anne Frank Memorial Ceremony in the Anne Frank Memorial Garden at Arboretum Park.
Supervisor Chad A. Lupinacci stated, “While we all come from different backgrounds and walks of life, we can all relate to the humanity and innocence of Anne Frank’s writings, which remind us that in a world filled with light, there is opportunity for evil to trespass against us. Despite our differences, we must stand together as we do, united in the Town of Huntington, as one people, one community, in the face of evil and those who seek to divide us.”
“I was proud to once again co-host the Annual Anne Frank Memorial Ceremony. This touching event honors the memory of Anne Frank and recalls her legacy, her courage in the face of unspeakable tragedy and her genuine belief in the goodness of mankind despite the ugliness of war and discrimination. May Anne’s legacy and wisdom continue to teach and inspire us for generations to come,” said Suffolk County Legislator Susan A. Berland. “Thank you to Rachel Epstein for graciously sharing her story as a Holocaust survivor, Rabbi Buechler, Rabbi Krublit and Rabbi Swerdlow, and all the members of our community who attended.”
Deputy Supervisor, Councilman Ed Smyth said, “Anne Frank was a gifted young writer but as I reviewed some of the passages in her diary, one of the great takeaways I found from her writing is that it demonstrates how ordinary of a young girl she really was. What happened to her could have happened to any one of us; the evil perpetrated during the Holocaust is still possible to this day but only if good people don't stand alert and on guard against it. This is why we must remain vigilant against ignorance and hate.”
Attendees of the Anne Frank Memorial Garden anniversary celebration were invited to take a walk through the garden following the program and offered light refreshments, courtesy of Hummel Hummel Bakery in East Northport and King Kullen.
The Anne Frank Memorial Garden symbolically captures the journey of Anne Frank’s life. It features a circular pathway that surrounds a garden, which leads to the sculpture of a young girl’s dress. The Memorial Garden serves as tribute to Anne’s legacy of wisdom and genuine belief in the goodness of mankind and human nature, despite the ugliness of war and discrimination.