Reports: beaches set to reopen after a 12 year-old girl and a 13 year-old boy were both hospitalized after suffering bite wounds from suspected sharks.

Islip, NY - July 19, 2018 - Town of Islip and Robert Moses State Park beaches are set to reopen today after being closed Wednesday, July 18 due to suspected shark attacks off the shore of Fire Island that hospitalized two children with bite wounds, officials say. An additional suspected shark sighting at Field 3 at Robert Moses prompted state officials to close that beach temporarily as well.
Authorities report that 12 year-old Lola Pollina was bitten yesterday at approximately 11:15 a.m. while swimming off of Sailors Haven at Fire Island while only 10 feet from the shore. Pollina, while interviewed by News12, indicated that she saw a “tannish, orangey-looking body and a small fin” during the attack and when she exited the water, she say that her leg was bloody with scratch mark. In the same interview, Pollina’s father indicated that he saw his daughter running out of the water with “pretty deep lacerations on her leg.”
Pollina was taken to Good Samaritan Hospital Medical Center in West Islip for treatment and is scheduled to undergo surgery for her injuries today, reports say. 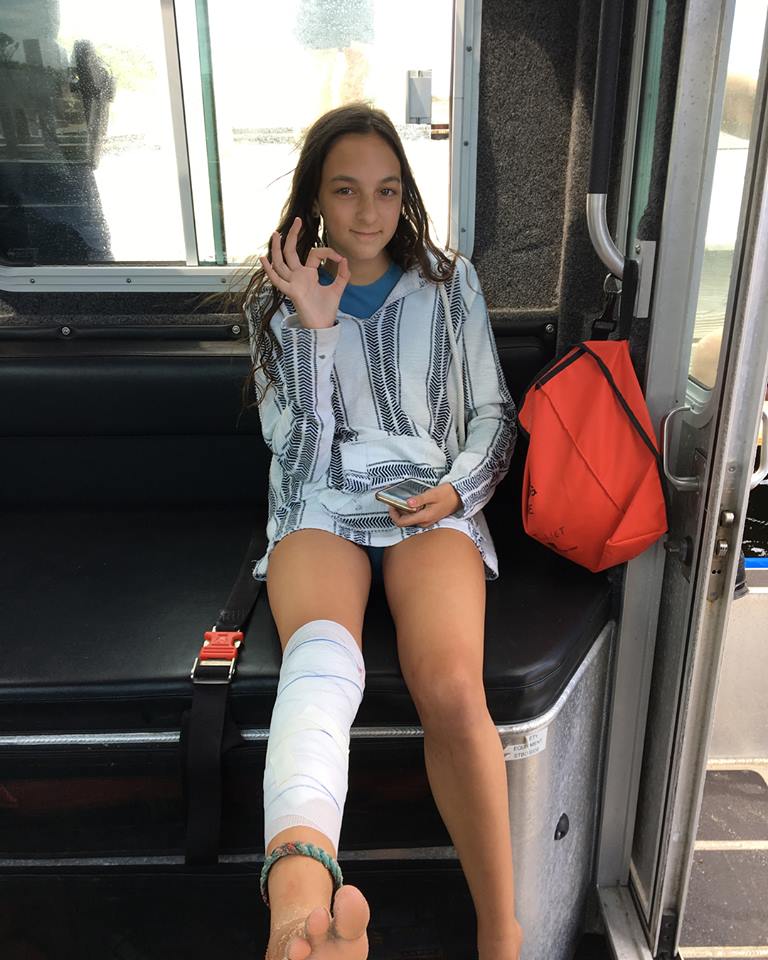 12 year-old Lola Pollina being taken to the hospital after a suspected shark attack at Fire Island. Photo Credit: Barbara Pollina
The second attack, officials say, occurred only 15 minutes later when a 13-year-old boy was bitten on the leg while riding on a boogie board at Atlantique while attending a Town of Islip day camp. The boy, whose name has not been released, was rushed to Southside Hospital in Bay Shore where he was treated for non-life threatening injuries and released. Reports indicate that the boy suffered puncture wounds and that a possible shark’s tooth was discovered inside one of the wounds. The tooth is currently being examined, authorities say.
Officials report that fishermen caught two sharks in the vicinity of Fire Island on Wednesday- one at Kismet Beach and the other only 50 yards from Atlantique, where Lola Pollina was attacked. However, it is currently not confirmed if these were the same sharks responsible for the attacks.
Islip Town officials responded to the suspected shark attacks by closing all of their ocean-facing beaches Wednesday, in addition to New York State’s decision to close Robert Moses due to the alleged Field 3 shark sighting. All closed beaches are set to reopen today, although officials have announced that extra lifeguards will be posted and the Suffolk County Police Department will have numerous officer and helicopter patrols canvassing local beaches throughout the day.
New York State Department of Environmental Conservation Commissioner Basil Seggos noted that authorities will be ever-vigilant to ensure the safety of residents following the reopening of Fire Island beaches today.
"Following yesterday's apparent juvenile shark attacks off Long Island, Governor Cuomo deployed State authorities to work with Suffolk County and local authorities to investigate the incidents. Investigators are currently analyzing a fragment of tooth to determine the specific species,” he said. "State beaches will be reopened for swimming today with additional lifeguards monitoring the water and patrols continuing along the Fire Island shoreline. We urge swimmers to be vigilant and will continue to do everything we can to protect beachgoers."