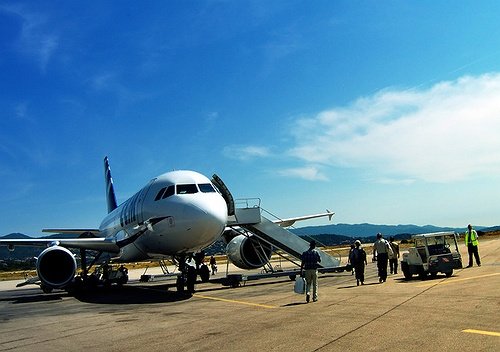 Photo by: createsima, via Free Images.

Farmingdale, NY - July 16, 2015 - Governor Andrew M. Cuomo today announced the commencement of $24.2 million in safety enhancements at Republic Airport in Farmingdale. The improvements will make activity into and out of the Long Island airport safer and more efficient, strengthening its capacity to serve the region by realigning the main runway, improving signage and lighting, installing a perimeter security fence and more. These Republic Airport enhancements are supported by $21.8 million in funding from the Federal Aviation Administration’s Airport Improvement Program and $2.1 million in State funding.

“Republic Airport is a vital link for air traffic to and from Long Island, and serves a crucial role in keeping New Yorkers safe during emergencies,” Governor Cuomo said. “This investment will give people and businesses more reasons to visit and ultimately call New York home. I am pleased to collaborate with our federal partners to make these enhancements a reality.”

Republic Airport supports approximately 1,400 airport-related jobs on Long Island, including 900 jobs on airport property. These enhancements will strengthen the airport’s critical role in serving Long Island by improving safety and efficiency and include: the realignment of runways 1-19; relocation of taxiway “G” and nearby hangars; realigning the airport’s perimeter road; improved signage, runway markings, lighting; and the installation of a security fence. This realignment enhances safety without the need to lengthen the runway.

New York State Department of Transportation Commissioner Matthew J. Driscoll said, "This project is another example of how, because of Governor Cuomo’s support for transportation, we are enhancing the State’s infrastructure in ways that are good for New Yorkers and good for business.”

The majority of funding for these enhancements is provided by the Federal Aviation Administration’s Airport Improvement Program, which provides grants to public agencies for the planning and development of public-use airports.