The New York Theatre Workshop had its sixth summer residency at Adelphi University in collaboration with the Adelphi's Performing Arts Center where 11 students from the Department of Theater provided assistance with theater productions. 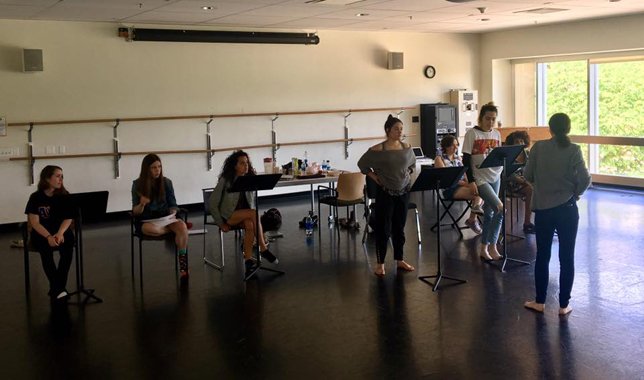 During the course of the residency, students and NYTW fellows worked on projects that were shared at the end of the residency as work-in-progress readings. Students were able to make connections with the artists, observe new ways to develop art, refine acting techniques, complete historical research and learn new theater terms and procedures. Though their responsibility was to assist the residency, collaboration played a key role in the experience.

“The first day we sat down, and all the actors read the play, they asked us what we thought. We were able to contribute, which we didn’t expect and they were receptive to it,” said Harper LaBrozzi ’20, one of the student interns. “It was truly ‘Hey really, what do you think of this?’ and that was something you do not get everywhere.”

Some students enjoyed the program so much that they decided to participate for a second year.

“Well coincidentally, the first time I saw a show at NYTW, which was my freshman year here, I immediately thought ‘I would love to do a show there,’” said Joanna Georghiou ’20, who described the experience as one to help students reach their future goals.“That’s a goal for myself, to be cast in a show at the Workshop. I feel like I’m closer to that now because I’ve done this twice and I’m getting to know the people who work there and see how they run which is amazing.”

The NYTW guest artists were eager to participate in the program and work with the students. One of the artists, Amauta Marston-Fermino, described the program as refreshing because groups of people come together to focus on creating art. Other artists agreed that the program will have a lasting effect. “If any one of these students were like ‘Hey I’m moving to New York, do you know anyone? Can you help me find an apartment? Can you put me in touch with who you know at X Y Z?’ I would be glad to do it,” said Ato Blankson-Wood, another guest artist.

The program began as an initiative led by the College of Arts and Sciences. Over the past six years, the program has extended its residency at Adelphi to provide more time for collaboration.

“It's a tremendous opportunity for us to bring artists outside of New York City and work within Adelphi's space aided by the theater students,” said Artistic Producing Associate, Rachel Silverman from NYTW. “It is very meaningful to us and to the artists we bring up to be able to work in such great facilities and be taken such good care of. One of my favorite parts is seeing how much work is always accomplished within each residency, and to see how the resources at Adelphi have helped to develop the piece in ways it may not have gone had we been working elsewhere.”

For more information about the AUPAC, visit aupac.adelphi.edu. For details about Adelphi University’s Department of Theatre, visit theatre.adelphi.edu/.

More than 100,000 Adelphi graduates have gained the skills to thrive professionally as active, caring citizens, making their mark on the University, their communities and the world.