A $2 million investment in the future of Crescent Beach in Glen Cove has been announced. 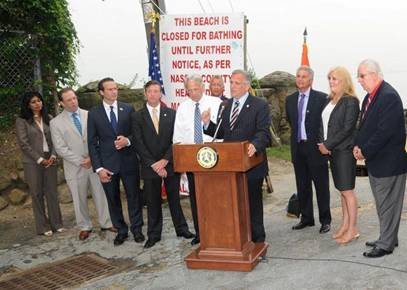 Glen Cove, NY - July 14, 2014 - Nassau County Executive Edward P. Mangano was joined by United States Congressman Steve Israel, New York State Senator Carl Marcellino, New York State Assemblyman Charles Lavine, Nassau County Legislator Delia DeRiggi-Whitton, Glen Cove Mayor Reggie Spinello and Sea Cliff Mayor Bruce Kennedy as he announced a $2 million investment in the future of Crescent Beach in Glen Cove. Since 2009, Crescent Beach has been closed for swimming due to elevated bacterial levels. Nassau County will fund a feasibility study for the installation of public sanitary sewers in the North Shore area. A modern sewer system, in place of an aging septic system, will help eliminate bacterial intrusion in the local waters.
“It’s important that we reopen Crescent Beach so that it once again serves as a beautiful destination for families, seniors and beachgoers,” said County Executive Mangano. "The installation of sewers in this North Shore is an important public health initiative as it will protect the local environment and improve the Long Island Sound so that our recreational fishermen and residents can rely on these waters for enjoyment and business alike. I thank Mayor Spinello for his commitment to this project and for dedicating the resources necessary to identify which sewered areas should be incorporated into the County’s sewage collection.”
Congressman Steve Israel stated, “Crescent Beach is a true treasure for the City of Glen Cove and for too long has been contaminated and unsafe for residents to swim and enjoy. I want to thank this bipartisan and diverse coalition of elected officials who have joined me in working tirelessly on finding a comprehensive solution to this issue and County Executive Ed Mangano for providing a $2 million investment in the future of this treasured natural resource.”
“This study is a positive step in maintaining the natural beauty and resources of the waterfront. With the hard work of Nassau County Executive Ed Mangano we will finally be able to formulate a solution to the problems associated with Crescent Beach and get this cherished area open to the public once and for all,” said Senator Carl L. Marcellino
State Assemblyman Charles Lavine stated, "For far too long, Crescent Beach has been unavailable for use by the residents of the Glen Cove community. Understanding the problems that exist here and undertaking the effort necessary to ensure the environment is protected is a vitally important step in reclaiming the beach. I am very grateful for the County's role in this effort and I am pleased to play a meaningful role."
“Since being elected, having Crescent Beach be reopened has been one of my top priorities. This is the beach I brought my own children to when they were small, and I hope these actions the County is taking today will help to ensure that Crescent Beach is enjoyed for many generations to come," said Legislator Delia DeRiggi-Whitton.
Glen Cove Mayor Reggie Spinello stated, "Once again County ExecutiveMangano has responded to my request for assistance in Glen Cove. Immediately after meeting with the County Executive and his staff to explain the inherent problems in the area surrounding Crescent Beach, the County laid the ground work for a long-term solution to our problem. This study, along with the supporting testing the City is providing and our new legislation regarding septic systems, will result in a marked improvement in the water quality in our area. I thank County Executive Mangano, Congressman Israel, SenatorMarcellino, Assemblyman Lavine and LegislatorWhitton for their support and assistance in this matter."
“This vital $2 million investment will ensure that Sea Cliff Avenue, the Village of Sea Cliff’s main strip of businesses, will be accounted for in this environmental project. I thankCounty Executive Mangano andCongressman Israel for their work in forming partnerships to find a comprehensive and common sense solution to this issue,” added Sea Cliff Mayor Bruce Kennedy