The Narcotics/Vice Squad reports the arrests of two men that occurred on Friday, July 10, 2015 at 7:10 pm in New Cassel. 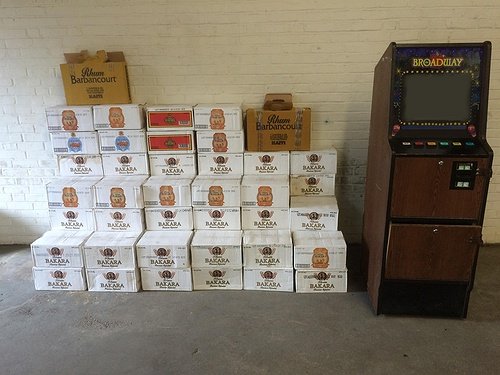 According to detectives, members from the Narcotic/Vice Squad with assistance from the Electronics Squad, Asset Forfeiture Squad and Bureau of Special Operations executed a search warrant at Rose Grocery, 1019 Prospect Avenue for an illegal gambling investigation.  Between March 2014 and June 2015 illegal bets were placed on nine (9) separate occasions with the store owner. During the warrant execution the store owner, defendant Jean Celestin, 51, of North Babylon and Aurel Bonhomme, 70, of Wyandanch were taken into custody without incident.  Recovered during the search warrant  were electronic equipment, in excess of 50 cases of non-taxed Haitian Rum and thirty thousand ($30, 000) in US currency.  The investigation is ongoing.

Celestin was charged with Possession of Gambling Records 2nd Degree, Promoting Gambling 2nd Degree and numerous charges related to the Alcohol and Tobacco Control laws.  Bonhomme was charged with Conspiracy 6th Degree.  Both defendants were arraigned on Saturday, July 11, 2014 at First District Court in Hempstead.