History: 1915 Ad Shows Bungalow For Rent on the South Shore

LIRR publication touted the splendor of travel to Long Island.

Obviously, the Long Island Rail Road would have a vested interest in touting the many splendors of Long Island. Around the turn of the 20th Century The Long Island Rail Road did just that with a series of periodicals that promoted rail travel east from New York City to the rural beauty of the region it served. In one such book titled, “Long Island and real life, Long Island railroad” published in 1915, the author called Long Island a region that “holds nearly everything reasonable people can want in this earthly life.”

Also read our story: Crazy Facts About the LIRR.

Among the prose were hundreds of ads displaying all the real estate for rent on Long Island was this one that advertised a Swan River Bungalow Colony on the Great South Bay in Patchogue.

“Fourteen Rustic Bungalows, furnished, to rent, beautifully situated among a pine grove, on the Swan River, Patchogue, ten ininutes walk or sail to the Great South Bay and fifteen minutes from Railroad Station and town,” the ad copy described. “Pine Neck Inn located on the premises offers to the guests and colonists a well managed ho

use with board and dining room service.” 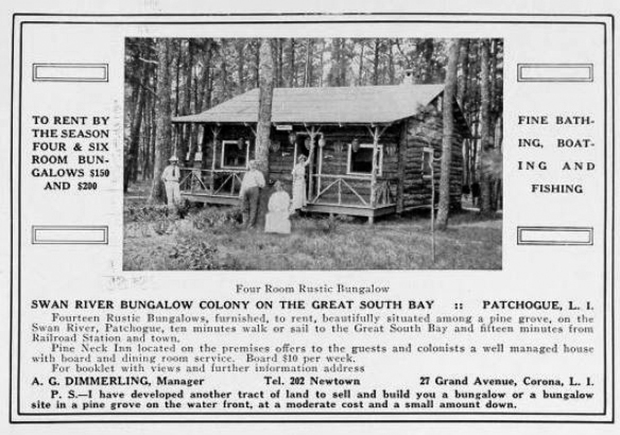