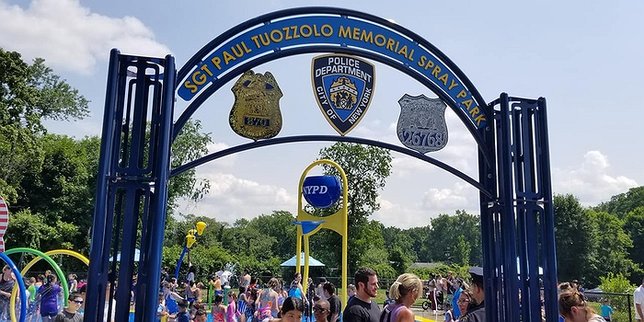 Elwood, NY - July 13, 2018 - Huntington Supervisor Chad A. Lupinacci, Councilman Mark Cuthbertson, Councilwoman Joan Cergol, Councilman Ed Smyth, Town Clerk Jo-Ann Raia, Highway Superintendent Kevin S. Orelli and Tax Receiver Jillian Guthman were joined by the Tuozzolo family, and officials from the NYPD, SCPD, Suffolk County and New York State for the Grand Opening Ceremony of the Sgt. Paul Tuozzolo Memorial Spray Park, the Town’s first spray park, at Elwood Park on Wednesday, July 11.
Supervisor Chad A. Lupinacci served as master of ceremonies, asking the audience to rise for the NYPD Honor Guard, who performed the presentation of the colors as NYPD Officer Jason Martinoff sang the National Anthem to open the ceremony.
Supervisor Lupinacci addressed Mrs. Lisa Tuozzolo at the ceremony: "This park, the memorial trellis, which bears your husband’s name and badge, the NYPD-themed spray features, and the values etched into the benches around the park -- HONOR, LOYALTY, BRAVERY, COURAGE, RESPECT, COURTESY, FAMILY, and DEDICATION -- all serve as reminders of who Sgt. Paul Tuozzolo was, and his devotion to protecting children and keeping them safe from harm. It is a gift of love from our Town, for all the community’s children to enjoy, but one that is meant to serve a more meaningful purpose: to bring laughter and joy to your sons, serving as a lasting reminder of the impact their father’s sacrifice has made on this community." 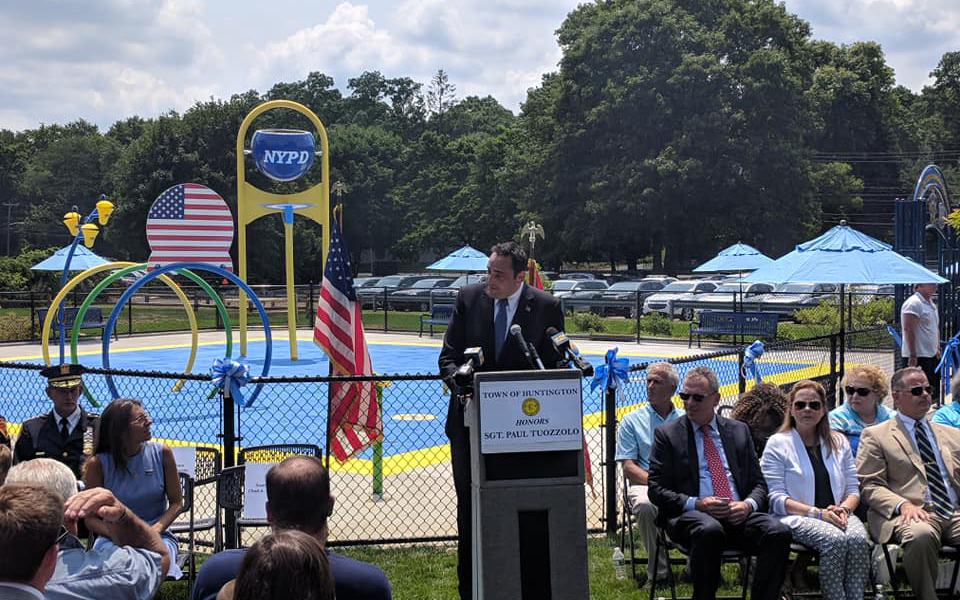 Supervisor Chad A. Lupinacci (at podium) addresses Lisa Tuozzolo (seated, left); (back row) SCPD Chief of Department Stuart Cameron; on right: (front row) Councilman Mark Cuthbertson; Councilwoman Joan Cergol; Councilman Edmund J.M. Smyth; (back row) Highway Superintendent Kevin S. Orelli; Tax Receiver Jillian Guthman; Town Clerk Jo-Ann Raia. Photo Credit: Town of Huntington
Councilman Mark Cuthbertson said, "Sergeant Paul Tuozzolo was a loving father and husband and devoted member of the NYPD. His time with his family was cut far too short. I hope that all who come to this park will reflect on his memory and enjoy precious time with their family."
Councilwoman Joan Cergol said, "Paul Tuozzolo was a true hero. He made the ultimate sacrifice while trying to keep people safe, and he is truly deserving of a living memorial. It is my hope that as children come to this park to cool off on hot summer days, they and their parents will pause to reflect on the person for whom the park is named."
Councilman Ed Smyth added, "The spray park is great way to honor the hero and the great family man Sergeant Tuozzolo."
Councilman Eugene Cook, who was unable to make it to the event, offered words of support: “Today is a day to celebrate the life of Sgt. Paul Tuozzolo as a father, husband and police officer who tragically lost his life while on duty serving as a New York City Police Officer.  This spray park will be a place where not only Austin and Joseph can come to play and relive their fond memories of their dad knowing that their community will remember the sacrifice Paul made protecting others; but where other young children will make memories with their families."
NYPD Chief of Department Terence A. Monahan, who arrived via NYPD helicopter addressed the crowd, New York State Senator Carl Marcellino offered words on behalf of the State.

Crowd on Spray Pad. Photo Credit: Town of Huntington
Lisa Tuozzolo addressed the audience before conducting the ribbon-cutting outside the memorial trellis at the entrance to the spray pad.
"This is a beautiful town to live in, this is a beautiful town to raise your family in, and I could not be more proud to be a member of this community," said Lisa Tuozzolo, expressing her gratitude towards the community that came together after the tragic loss of her husband.
Thanking all involved with the spray park project, and especially project manager Ed Parrish, she added: "I can't thank you enough for all of your efforts in making this a reality."
At the podium, Mrs. Tuozzolo was interrupted by their youngest son, Joseph, who testified to his father's greatness: "Daddy let us play Xbox on a school night and Boo-Boo Butt!" Tuozzolo explained this was a character from one of his cherished books.
Noting that a place that will bring "so much joy to so many families" was a fitting tribute to her husband, Tuozzolo said, "I'm so excited to be able to see his memory and legacy live on through this park, and of course, shortly after this dedication, play in this spray park with my boys," with her hand on her heart, "that will bring me joy."
The Tuozzolos’ sons Austin and Joseph performed the honors of pushing the water-activating buttons to open the spray park.
Huntington Learning Center donated ice cream and other giveaways to attendees. Town Concessionaire, D&J Refreshments, donated water and Gatorade. Elwood Public Library set up a prize wheel for giveaways.
Lisa Tuozzolo, her sons, and Lt. Christopher Pizzo of the NYPD Commissioner’s office have been involved with the planning and design of the spray park from conception to construction, joining Town Supervisor Chad A. Lupinacci, his staff and the Town’s Civil Engineering Department at various progress meetings throughout the year. On May 9, Mrs. Tuozzolo and her sons Austin and Joseph stopped by the construction site to create handprints in the sidewalk just outside the spray pad’s recently-installed memorial trellis.
Project Manager for the spray park, Town Civil Engineer Ed Parrish, who Lisa Tuozzolo acknowledged at the ceremony for this thoughtful inclusion of her family in every detail of the project, has noted that he had “not been involved in a Town project before where so much complex construction work was completed using in-house staff.”  Ed never lost sight of the importance of this project to the Tuozzolo family. In the middle of a busy construction schedule, he remembered to call Lisa Tuozzolo and have her come to the site with her two boys to put their hand prints into the wet concrete just outside the entrance gate.
Town Engineering Department Director Joseph Cline estimates the Town saved approximately $100,000, by having qualified and licensed Town employees perform major plumbing, irrigation, electrical and construction work.
Under Cline’s direction, the Engineering Department was able to complete the project on-time and on-budget. This project went from concept in September 2017 to construction completion in 10 months’ time.
Cline credits Lead Design Engineer for the spray park, Assistant Civil Engineer Nick Jimenez, for providing key design and AutoCAD expertise to the project, preparing site construction plans, and for his accurate selection of a key location within the park to house the spray pad and irrigation components.
Town General Services Department Director Andre Sorrentino and his team had a major role in the construction of the park, installing the parking lot expansion snow fence, regrading and seeding the park, refurbishing the comfort station, installing the new concrete sidewalk, installing a new 4” water main from the street to the comfort station, performing all of the plumbing inside the building to connect to the water spray equipment, installing a complete irrigation system for the park, and installing electricity to the irrigation pump and shade structure.
The Huntington Highway Department provided RCA, excavation and fill for the in-house sidewalk project and asphalt millings for the maintenance roadway to the comfort station. Highway also assisted in providing the access way from the original parking lot to the grass overflow parking lot.
“I was very proud to have myself and the men and women of the Highway Department play a small role in honoring Sgt. Paul Tuozzolo. Knowing that his memory will live in perpetuity is a fitting tribute for someone who gave so much for his community,” stated Highway Superintendent Kevin S. Orelli.
Town Parks and Recreation Department Director Greg Wagner had his staff trained to run the spray park; they stocked the park with an AED (defibrillator), first aid kit, and shade umbrellas for each of the eight blue benches displaying words chosen to represent values held by Sgt. Paul Tuozzolo by his family.
The Sgt. Paul Tuozzolo Memorial Spray Park is 4,900 square feet in area with 2,500 square feet of active play features utilizing push-button activation technology for efficient water use; the spray pad water runoff will be collected and reused for field irrigation at Elwood Park.
Official hours for the spray park will be from 11 AM to 8 PM (due to this year’s planned playground camp being housed at Elwood Park, spray park hours during camp days Monday through Friday will be from 12:30 PM to 8 PM through August 10). The spray park will be open to residents with Resident Recreation Photo ID Cards (children under 13 years old will be able to use the spray park if accompanying parent/guardian shows a Resident Recreation Photo ID Card – exception only for those who have Picnic Permits for that day), which may be purchased at Town Hall in the Parks and Recreation Department (Room 103) Monday through Friday, 9:00 AM to 4:00 PM, call (631) 351-3089 for information. Recreation ID Cards may also be purchased at the Dix Hills Ice Rink, call for hours, (631) 462-5883. This summer, non-residents may only enter the spray park if they are accompanied by a resident with a Resident Recreation Photo ID Card.