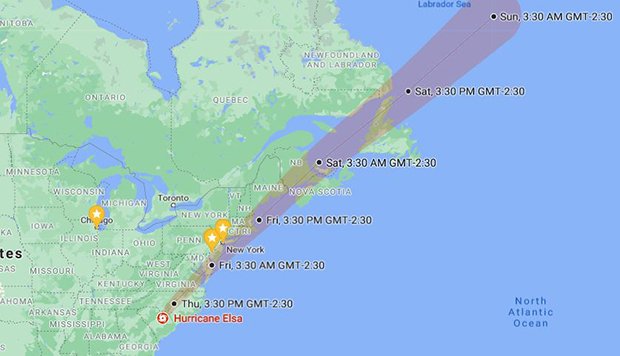 The National Weather Service says that Tropical Storm Elsa, which is currently moving through the Southeast, will continue to bring tropical storm force winds and heavy rainfall to parts of the Northeast into Friday.

According to experts, this first named hurricane of the season comes six weeks earlier than average this year, which is usually around August 14.

PSEG Long Island said it is preparing for the storm. As the remnants of now downgraded Tropical Storm Elsa make its way up the coast, its employees are performing system checks and prepping for any potential outages, the company said in a statement.

“High winds can send debris flying, topple trees and bring down power lines,” said Michael Sullivan, senior director of Transmission & Distribution at PSEG Long Island. “Employees and contractors are prepared to respond to and restore any outages caused by the storm safely and as quickly as possible.”

Elsa has wreaked havoc in the Carribean and in the southeastern United States. According to the National Hurricane Center, Tropical Storm Elsa made landfall in Taylor County along the North Florida Gulf Coast at around 11am. Maximum sustained winds were estimated at 65 mph at the time of landfall.