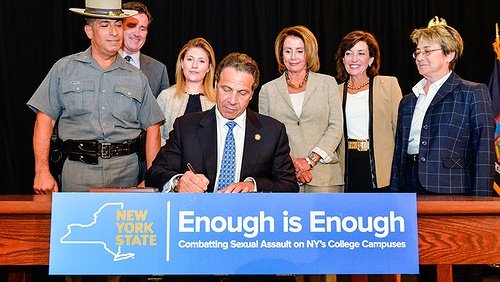 Albany, NY - July 7, 2015 - Governor Cuomo signed his “Enough is Enough” legislation to combat sexual assault on college and university campuses statewide. The new law requires all colleges to adopt a set of comprehensive procedures and guidelines, including a uniform definition of affirmative consent, a statewide amnesty policy, and expanded access to law enforcement to ensure the safety of all students attending colleges in New York State.

"I am proud to sign into law the most aggressive policy in the nation to fight against sexual assault on college campuses," Governor Cuomo said. "Today, New York is making a clear and bold statement: sexual violence is a crime, and from now on in this state it will be investigated and prosecuted like one. With this law, we will better protect every student that attends college within our borders, and I am proud New York is leading the way once again. I thank my colleagues in the Legislature, Democratic Leader Nancy Pelosi, the student advocates who fought to make this a reality and all of the supporters who came together and said Enough is Enough."

“Campus sexual assault is an all-hands-on-deck epidemic in America,” said House Democratic Leader Nancy Pelosi. “Today is a tipping point day, and I was proud to stand with Governor Cuomo as he signed into law a strong tool for all the educators, administrators and women fighting to end campus sexual assault once and for all. We must confront this issue everywhere, from campus to Congress – and New York is leading the way forward for our nation.”

Senate Majority Leader John Flanagan said, “This new law will combat and root out sexual assault so our college campuses are safe learning environments for all students. I thank Senator Ken LaValle for his hard work on this issue, as well as Governor Cuomo and Speaker Heastie, and I commend my colleagues and the advocates for working together to enact this extraordinarily important piece of legislation.”

Assembly Speaker Carl Heastie said, “Campus sexual assault must stop. Our students deserve safety and security as they pursue a higher education. This plan encourages victims to speak up and provides a uniform policy for handling accusations throughout all New York State colleges. The Assembly has worked diligently to see this bill become a law and I am pleased that Governor Cuomo has taken the lead in making this a reality.”

Senator Ken LaValle, Chairman of the Senate Higher Education Committee said, “We have approached this sensitive topic in a comprehensive, thoughtful manner. This new law provides critically important protections for victims and details the processes necessary to achieve fair and just results for those involved. The law provides a clear path to combat and eradicate campus sexual assault and a course of action for victims. It provides for education of all college students; recommends methods of prevention, and provides assurance of due process in the adjudication of these incidents. It addresses the complex issues and will better protect our college students across the state.”

Assembly Member Deborah Glick, Chair of the Assembly Higher Education Committee, said, “This law enacts a set of clear, fair and effective policies to combat sexual assault on campus. It will help the many students who are victims of sexual assault, rape, domestic violence, stalking and other heinous acts, as well as offering funds to address prevention and training to stop incidences from occurring. I commend my colleagues in both the Assembly and the Senate for passing this legislation and Governor Cuomo for signing it into law.”

SUNY Chancellor Nancy L. Zimpher said, “As state leaders and educators, our first and foremost responsibility is to ensure that our college and university campuses provide a safe haven for students as they complete their higher education and work toward a degree. The ‘Enough is Enough’ legislation signed today is a promise of safe and secure learning environments for students attending college anywhere in New York State, and SUNY has been proud to serve as the policy model for these comprehensive reforms. With this historic bill, Governor Cuomo and the legislature have further positioned SUNY and New York to lead the nation in combating sexual assault and violence on college campuses.”

Whoopi Goldberg, who was one of the first people to sign on to the Governor’s Enough is Enough campaign, said, “Today, Governor Cuomo is standing up to reinforce the message that turning a blind eye to sexual assault on college campuses will no longer be tolerated. Enough is enough, and it is time we deliver on our promise to make all students safer and all victims heard. Thanks Governor Cuomo and all those that worked tirelessly to give victims of sexual assault a voice.”

Connie Neal, Executive Director of the New York State Coalition Against Domestic Violence, said, “Today, New York State will take a bold step forward in the work to end sexual assault, domestic violence, dating violence, and stalking on college and university campuses. We believe that this legislation can serve as a model for other states across the nation, and commend Governor Cuomo and the Legislature for their leadership and commitment to ensuring consistent campus policies and responses statewide. No student should ever have to go through the experience of being assaulted, abused, or stalked, but those that do experience these crimes should be provided with the information, resources, and support necessary to help them move forward.”

Carol Robles-Román, President and CEO of Legal Momentum, said, “Educational institutions and campuses have a duty to all students to keep their campuses free from sexual assaults and violence. Thanks to Governor Cuomo’s leadership, New York State’s new law will be a model for other states to follow: all campuses must implement uniform guidelines that will make them safer environments for our next generation of leaders to live, learn and grow. The bill is an important development in keeping our young people safe and in combating sexual assault crimes.”

Sonia Ossorio, president of NOW NY said, “Addressing gender discrimination and violence has been a major theme this year in Albany, with a number of significant pieces of legislation set to become law. By tackling the pressing issue of sexual assault on campus New York is making real progress to ensure college students an education free from violence.”

Ariel Zwang, CEO of Safe Horizon, said, “Safe Horizon applauds Governor Cuomo and the New York State Legislature for taking bold action to address sexual assault on our college campuses. By signing this bill into law, New York is leading the way in equipping our students and faculty with the resources to respond more effectively to these crimes. This new law, and the resources that accompany it, will help make college campuses safer, more enriching environments. We look forward to working with our state and city officials to ensure that all students in New York are able to study at their college campus of choice free of sexual violence.”

Susan Xenarios, LCSW, Director of the Crime Victims Treatment Center at Mount Sinai St. Luke's and Roosevelt Hospitals, said, “We are pleased that New York is taking critical measures to support survivors of sexual violence on college campuses and the programs that help them heal. A college campus is a place for learning and growing, and students should be able to feel safe. This law serves as a quantum step in the fight against sexual assault nationwide. We are proud to have had the opportunity to work collaboratively with the Governor, advocates and students to say once and for all: "Enough is Enough!”

Stephanie Nilva, Executive Director of Day One, said, "Day One applauds Governor Cuomo's Enough is Enough legislation for increasing available resources available to young people who experience sexual assault while in college. Uniform requirements for institutions of higher education will improve responsiveness to survivors, and the affirmative consent standard will shift the culture in New York toward a healthier approach to intimacy among students."

Monica Sobrin, of Students United for Safer Schools NY and a student at Fordham College at Rose Hill, said, "I'm incredibly proud of New York, the state that I grew up in, for being a national leader in the fight against campus sexual assault. The affirmative consent standard, Victim/Survivor Bill of Rights, primary prevention education, and reporting procedures outlined in this legislation will greatly impact the way that sexual assault is discussed, taught, and handled in colleges and universities statewide."

"I was proud to stand with Governor Cuomo as he signed into law a strong tool for all the educators, administrators and women fighting to end campus sexual assault...New York is leading the way forward for our nation," said Nancy Pelosi, House Democrat Leader.

This legislation was first proposed by Governor Cuomo in January and will extend the preventive policy and protections adopted by SUNY campuses to all university campuses statewide.

Since January, Governor Cuomo has led the “Enough is Enough” campaign to combat sexual assault on college campuses, and since its inception, it has gained a broad range of support from public officials, organizations and community groups, including: