The Nassau County Department of Public Works converted a stormwater basin into a living tribute of native plants and wildlife. 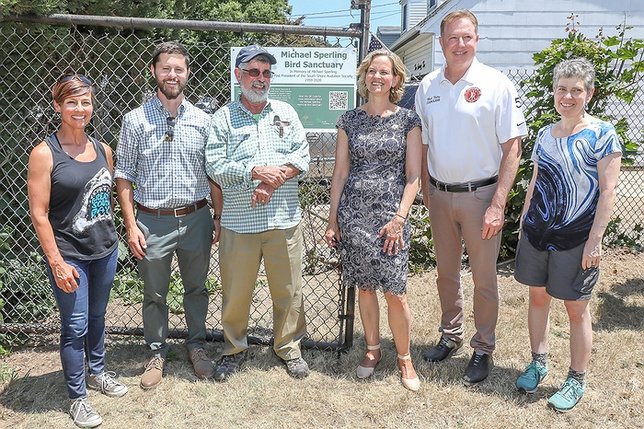 Recently, Nassau County Executive Laura Curran toured the newly completed Michael Sperling Memorial Bird Sanctuary in Massapequa. The Nassau County Department of Public Works (DPW) worked with the South Shore Audubon Society to convert what was a stormwater basin into a living tribute of native plants and wildlife to commemorate Michael Sperling’s many years of commitment as an environmental leader.
“Nassau’s Adopt-a-Sump program allows us to work with wonderful organizations like the South Shore Audubon Society to transform land into sanctuaries for our wildlife that protect Nassau’s natural habitat. Not only will this new preserve attract birds and other animals, it will serve as a  fitting tribute to community leader Michael Sperling,” said County Executive Laura Curran.
Native wildlife needs native plants to thrive and survive and this Sanctuary will provide new vital habitat for birds as other areas are destroyed by development and climate change. The native plantings at the Sanctuary provide habitat and food for birds, butterflies, and other wildlife and attract an array of fruit, nectar, seed, and insect eating birds throughout the year. The Sanctuary will also provide a critically needed refuge for songbirds that migrate annually along the Atlantic flyway.  DPW also ensured that it will continue the function of reducing flooding in roadways and channeling precipitation into the groundwater aquifers.
The sanctuary is located adjacent from Plainedge High School in North Massapequa. This location was chosen for its native trees and flowers, and its manageable amount of invasive vegetation.  The project sanctuary also acts to educate the public near our bird sanctuary about the purpose of storm drains with educational signage.
The Sanctuary was named in honor of the late Michael Sperling, champion of open space and advocate for the natural resources of Long Island.  Michael Sperling was a member of the South Shore Audubon Society for over 30 years--  serving two terms as President, was editor for 28 years of the Society newsletter and was the de facto historian of South Shore Audubon. He also served on the Board of the New York State Audubon Council and as Vice President of the Friends of Massapequa Preserve.
“With 1/3 of our birds lost since 1970, and 2/3 at risk of extinction from climate change and habitat destruction, every bit of habitat we can create will help sustain their populations. We hope our Sanctuary will serve as a model and educational resource for others to use Nassau’s Adopt-a-Sump program or to plant native plants on their properties to create a healthy environment for birds and other pollinators.” said President Brien Weiner.
"We are so pleased to be a part of the transition of sumps into Sanctuaries. It truly symbolizes thinking globally and acting locally. Thanks to County Executive Curran for having the vision to support this effort," said Frank Piccininni, Founder of Spadefoot Design and Construction.