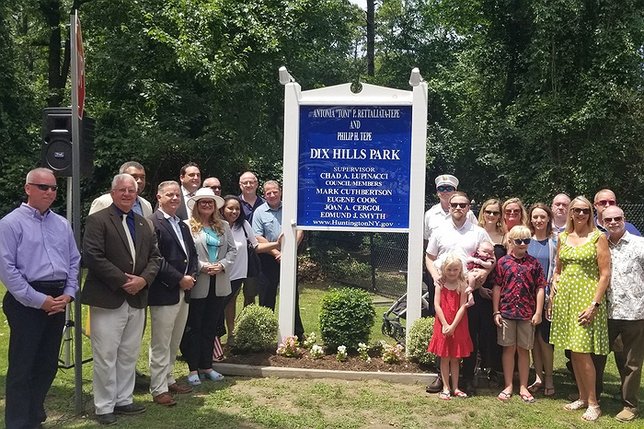 Supervisor Chad A. Lupinacci, Deputy Supervisor Councilman Ed Smyth, Town Clerk Andrew Raia and Receiver of Taxes Jillian Guthman were joined by current and former Town of Huntington, Suffolk County, and State officials, the Tepe and Bifulco families, the Dix Hills Fire Department, the Huntington Manor Fire Department, and the Huntington Community First Aid Squad on Sunday, June 27 at Dix Hills Park, for a dedication ceremony officially renaming the park after Huntington's first and only woman Town Supervisor to date, Antonia “Toni” P. Rettaliata-Tepe, and her beloved husband, Vietnam Veteran, Commissioner and Ex-Chief of the Dix Hills Fire Department, Philip H. Tepe.
Supervisor Chad A. Lupinacci stated, “A woman of substance, trailblazing grit and fortitude, Supervisor Toni Rettaliata's achievements in Town office far exceed the single history-making, glass ceiling-breaking achievement of becoming our first woman Town Supervisor, and it should be noted how an effective Town leader she was in what was then a very short two-year term, and without a supportive majority on the Town Board! Her partner in life for the past two decades, Phil Tepe, was an American patriot and life-long public servant who dedicated his life to our community. Dix Hills was the hamlet Toni and Phil called home for many years and this family park dedication is a fitting tribute to their legacies of service, love of community and family.”
Deputy Supervisor Councilman Ed Smyth stated, “Both Toni and Phil were pillars of our community. They both embodied and lived lives of public service. Phil was a veteran, a volunteer firefighter and heavily involved in the department community. Toni was a member of the NYS Assembly, a trailblazing Town Supervisor, and a Republican leader. The political graveyard is littered with the people who underestimated her. She was a worthy adversary, but she always gave second chances. I am living proof of that. So when you are out here playing golf and you hit your ball into the trees, and it bounces out back onto the fairway think of Toni. She’s giving you a second chance. They are truly missed by their friends and family alike. Dedicating this park in their honor is well-deserved.”
Town Clerk Andrew P. Raia said, “I’m very proud of my relationship with Toni Rettaliata Tepe. She was a lifelong friend, mentor, and an inspirational pioneer when it came to women in elected government positions, she will sorely be missed. Phil Tepe taught me all about the Brotherhood of Volunteer Firefighters and the dedication and commitment that they have to protect and serve the community. It is my hope that for generations to come people entering Dix Hills Park will take a moment to google Toni and Phil Tepe and learn what an inspiration they were to our community.”
Receiver of Taxes Jillian Guthman said, “Public service is such a tremendously rewarding vocation. There is so much that we can do when we work together. Toni and Phil are examples of people who loved this Town and who gave so much in their areas of interest to advance our community.”
Former Town Clerk Jo-Ann Raia, who served with Supervisor Rettaliata, said, “I was honored to speak at Sunday’s renaming of Dix Hills Park. Toni and Phil were dedicated to our Town. I knew Toni for over 45 years. She cared for the residents of Huntington and when she was Supervisor, she instituted numerous programs to benefit them, many are still in existence. Phil’s commitment to the Fire Service is unparalleled. Toni and Phil are gone, but they are not forgotten.”
Todd Cohen, Chairman of the Board of the Dix Hills Fire Department, stated, “When Phil and Toni's grandchildren enter the park, they will forever be reminded of their grandparents. We wish this park brings smiles to the Tepe family. We hope that the community members that knew Phil and Toni will smile and tell others stories of Phil and Toni and their love for the Town of Huntington.”
Jessica Van Bladel, niece of Supervisor Toni Rettaliata, stated, “Not only are we recognizing the tremendous influence both Toni and Phil left on the town of Huntington, most of all we are honoring them as individuals. My aunt Toni and uncle Phil have left an everlasting impression on me; to be the best version of myself, and I know many of you can say the same.”
Brett Tepe, son of the Tepes, also following in his father’s footsteps as First Assistant Chief of the Dix Hills Fire Department, spoke on behalf of the Tepe family, stating, “The Tepe family is honored and humbled to have Dix Hills Park dedicated in honor of our parents, Phil And Toni. It is a place where future generations of our family and countless Huntington residents may visit and appreciate the best that Huntington has to offer. As it will now bear the name of two of the most dedicated town residents, the park will stand as a reflection of the great things Phil and Toni always imagined for Huntington and worked so passionately to achieve.”
Attendees of the ceremony counted down from ten – the number of years Toni Rettaliata served in elected office – to unveil the sign dedicated as Antonia “Toni” P. Rettaliata-Tepe and Philip H. Tepe Dix Hills Park.