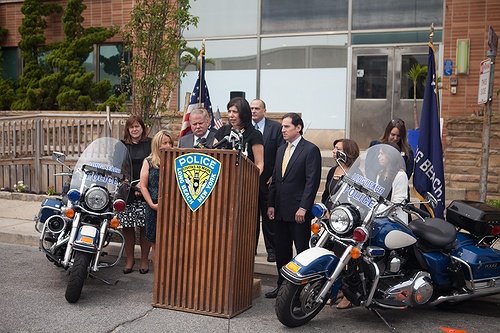 “History tells us that drunk and drugged drivers don’t take holidays, they ruin them for innocent families” Acting DA Singas said in front of Long Beach Police headquarters today. “I am grateful to the Long Beach Police Department for undertaking this public safety campaign and reminding everyone on our roads and in our waters that there is no room for drunk or drugged operation. My office is ready to prosecute offenders throughout Nassau County but I would rather everyone just had a safe Independence Day weekend.”

“Unfortunately, every holiday is scarred by DWI tragedies,” Commissioner Tangney said. “We applaud DA Singas for recognizing this carnage and offering us the support to properly deploy resources to intercept impaired drivers, limiting future tragedies.”

This weekend’s crackdown, funded fully by criminal asset forfeiture funds provided by Acting DA Singas and DWI enforcement grants secured by Chris Mistron of the Nassau County Traffic Safety Board, will consist of highly trained, roving Long Beach Police Department patrols focusing on strategic times and locations as well as prevention. The roving patrols will thwart social media applications such as Waze, which are known to be used by drivers to report and avoid static checkpoints.

The initiative will be staffed entirely by officers specially trained in field sobriety tests, breath analysis and drug recognition.

In addition to pulling over drivers suspected of drunk or drugged driving, Long Beach Police will also be observing patrons leaving bars, marinas and other establishments for signs of possible impairment, and warning them of the consequences of drunk driving or boating.

“Focusing on drunk driving just before the Fourth of July weekend will hopefully bring attention to this critically important issue,” Assemblyman Todd Kaminsky said. “There are innocent men, women and children who, right now, may not survive the weekend due to the irresponsible acts of a few. These individuals must be taken off the road and prosecuted to the fullest extent of the law. I applaud the District Attorney’s and the City of Long Beach’s efforts to do just that.”

“The City's police department has made a concerted effort to crack down on drunk driving,” City Councilwoman Eileen J. Goggin said. “Under the leadership of Commissioner Tangney, our officers will continue to do everything they can to keep our streets safe for motorists, bicyclists, and pedestrians.”

“Drinking and driving – whether underage or of legal age – is totally preventable and the time to prevent this is before anyone takes that first drink,” said Judi Vining, Executive Director of Long Beach Aware, formerly known as the Long Beach Coalition to Prevent Underage Drinking. “We applaud the DA’s office and the LBPD for increasing DWI initiatives so that this holiday weekend is a time for families to celebrate our nation, rather than mourn the loss of a loved one. We hope that this advance announcement will give people pause to put plans in place so that no one leaves the house to party with car keys in hand.”