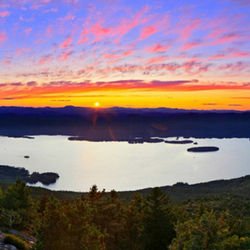 Albany, NY - July 2, 2015 - Governor Cuomo announced the total economic impact of New York State’s tourism industry in 2014 reached an all-time high of $100.1 billion. Historic investments in the tourism industry have generated job growth and an increase in visitors to New York, making it the most visited state by overseas travelers for the 14th year in a row. The Governor also highlighted the 2015 summer ad campaign featuring vacation destinations and attractions from all regions of the state.‎

"A stronger tourism industry in New York means more jobs and more economic activity in local communities. That's why growing this critically important industry has been a top priority of this administration – an effort that, as this new data demonstrates, has been effective," Governor Cuomo said. "I encourage New Yorkers and visitors alike to join the ever growing number of people who are vacationing in this state and seeing for themselves all that the Empire State has to offer.”

Indirect impact: $18.52 billion
The secondary benefit to suppliers of goods and services, for example, food wholesalers that provide goods to a New York restaurant.

Impact to local economy: $19.18 billion
The benefit to New York’s economy from the incomes derived at the direct and indirect levels of impact is spent on goods and services. For example, the restaurant’s employees spend their wages at a local grocery store.

Since taking office, the Governor has worked to grow New York’s tourism industry. Since 2011, tourism employment increased by 16 percent. According to the Economic Impact of Tourism in New York Report, in 2014, tourism spending generated an estimated $7.8 billion in state and local sales taxes and direct visitor spending was up by 5.4 percent. Additionally, in 2014, the number of domestic and international visitors to New York is projected to have grown 4 percent to nearly 227.5 million total in 2014, surpassing the level of national growth‎. The result of all levels of impact of New York State tourism found by the IMPLAN model, reached a total economic impact of $100.1 billion.

For the 14th consecutive year, New York was the most visited state by overseas travelers in 2014, according to the U.S. Department of Commerce's National Travel & Tourism Office. A total of 9.98 million overseas visitors came to the Empire State last year, accounting for 29% of all overseas travelers in the United States. Florida remained #2 and California was ranked #3 among states in overseas visitation.

Empire State Development President, CEO & Commissioner Howard Zemsky said, “Tourism is a cornerstone of New York’s economy and critical to communities from Niagara Falls to Nassau County. Under Governor Cuomo’s leadership, our strategic investments promoting New York are helping to create a record-breaking year. Through our local, national and international partnerships, we will continue to promote all that New York has to offer to build economic opportunities in 2015 and beyond.”

Senator Betty Little said, “New York’s tourism promotion investments are complementing those we see on the local level, helping spread the word that there is a whole lot to love about New York. As chair of the Senate Cultural Affairs, Tourism and Parks and Recreation Committee, I’ve been pleased to partner with Governor Cuomo, Assemblywoman Markey, Empire State Development and tourism organizations across the state to increase funding in our State Budgets for tourism marketing. There is a very clear benefit in doing so as employment and revenue have also increased.”

Assemblywoman Margaret Markey, Chair of the Assembly Committee on Tourism, Parks, Arts and Sports Development said, “This is terrific news and it demonstrates how the focus of Governor Cuomo on the tourism sector continues to pay dividends. ‘I Love New York’ is more than just a slogan. This increase in the number of visitors and their spending means new jobs and growing economic activity throughout New York State.”

Fort Ticonderoga President & CEO Beth Hill said, “Overall attendance was up 4 percent, and revenue was up 14 percent in 2014. The Governor’s commitments to increased promotion of the Adirondacks and the North Country have certainly had an impact on Fort Ticonderoga’s bottom line."

President & CEO of Visit Buffalo Niagara Patrick Kaler said, “The focal point of Buffalo’s revitalization has been Canalside with the $300 million waterfront development, centered around the historic western terminus of the Erie Canal that drew over 1 million visitors in 2014. The efforts of Governor Cuomo and Empire State Development have made Canalside the jewel in the crown of Buffalo’s once-in-a-lifetime transformation.”

Director of Communications at Dia Art Foundation Melissa Parsoff said, “We were thrilled to be part of the 2014 “I Love New York” campaign. We received great feedback on the commercial, especially during the Olympics when it reached very broad audiences. In fact, anecdotally, many visitors told us they came to the museum because of the commercial. Through expanded programming, an increased emphasis on marketing and new partnerships, our attendance has been steadily increasing during this time. Between FY 13 and FY 14, we saw an almost 20% increase in visitors.”

Destiny USA Executive David Aitken said, “The comprehensive emphasis on tourism in Upstate New York over the past few years by Governor Cuomo and New York State is helping to drive new visits to Central New York. The strategy to work internationally in Canada, China, England and Australia (among others) to promote group tour visits to Syracuse and other Upstate markets is introducing new customers to the rich assets we experience on a regular basis. Destiny USA looks forward to working with New York State to further increase the positive impacts associated with a growing tourism economy.”

Governor Cuomo’s commitment to tourism continues throughout every region of the state and Market NY Grants are currently available through Round V of Governor Cuomo’s Regional Economic Development Council initiative of up to $12 million. The funds are available to projects that will increase tourism and create job opportunities in New York State. Businesses, municipalities, not-for-profits and other entities are invited to apply by July 31, 2015 at 4 p.m. Click here for the application and here for guidelines and scoring criteria.