This week Long Island saw its first coyote and several poisonous Portuguese man-of-wars washed up on our shores. 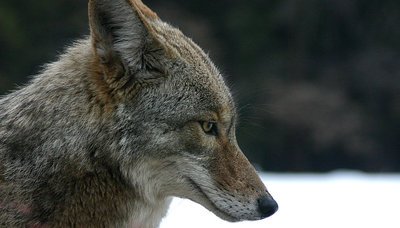 Monday marked the first ever DEC-confirmed sighting of a coyote on Long Island. In a phone conversation earlier today, Bill Fonda, a representative for the New York State’s DEC confirmed the coyote sighting when Watermill potato farmer, Rick Wesnofske, sent them a photo of the wild animal. The coyote was also sighted in Bridgehampton. Javier Manzon, a postdoctoral fellow at Stony Brook and coyote expert says the animal could have come to Long Island by bridge or swam.

Mr. Fonda stated that the DEC’s Stony Brook office is unsure where the coyote came from, and that they're typically not found Watermill -  although coyotes have been spotted in Queens and Fishers Island previously. According to Fonda, the DEC will be investigating this incident, and sending a team out to look for paw prints, scat, food remnants, and other signs that there are multiple coyotes in the area.

Coyotes are four to five feet tall and resemble a German Shepherd with thicker fur. One characteristic which distinguishes the two is that coyotes run with their tails pointed down. They can weigh from 35 to 45 pounds, and their colors vary from blonde, reddish blonde, and dark tan.

Coyotes are typically found in the less populated parts of New York, including areas upstate, but they can easily adapt to our human surroundings. During these summer months, coyotes have a population of about 20,000 and 30,000. Areas with humans live are well-liked by coyotes because there’s a large food supply of rabbits, squirrels, deer, cats, small dogs, garbage, and pet food.

The coyote even has its own parody Twitter Account, which was set up shortly after the DEC's statement and photo were released. When one person tweeted at the Coyote calling it a fox it simply said, “Wrong.” The Twitter prankster even went as far as photoshopping the so-called "Hamptons Coyote" in to a Vanity Fair photoshoot and outside of a storefront in Bridgehampton.

The Hamptons Coyote wasn't the only recent rare sighting on the eastern end of Long Island. Several poisonous Portuguese man o' wars washed up in the Hamptons. Five were found in East Quogue, one in Southampton Village, two in Sagaponack, and the rest were found in East Hampton.

This is the first time in over a decade the man o'war was seen on the Island. Eric Shultz, president of the Southampton Town Trustees, says they found themselves here when storms pushed them from the Gulf Stream.

The Southampton Board of Trustees says on their Facebook the man o' war's sting is still active even after its died and they're urging swimmers to keep an eye out for them. "The man o' war is not a jellyfish, but actually a siphonophore." their Facebook states. "It is not a single organism, but a colonial organism made up of many minute individuals called zooids."