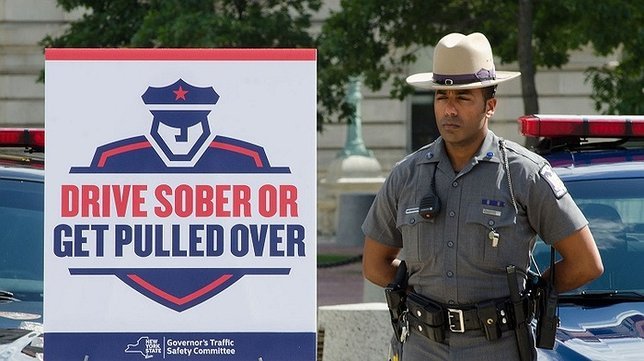 New York, NY - June 29, 2018 - The New York State Police will increase patrols to crack down on drunk and drugged driving and other traffic infractions over the Fourth of July holiday. State Troopers will conduct sobriety checkpoints and target reckless and aggressive driving statewide in an effort to keep New York highways safe during one of the busiest summer holidays for travel. This special enforcement detail will begin on Saturday, June 30, 2018, and run through Thursday, July 5, 2018.
New York State Police Superintendent George P. Beach II said, “State Troopers will be highly visible on the roadways during the holiday, targeting drivers who needlessly put others in danger. We know all too well the preventable tragedies caused by impaired, reckless and distracted driving. Make the right choice – if your celebrations include drinking, plan ahead for a safe ride home.”
Last year, the State Police issued nearly 10,500 vehicle and traffic tickets during the Fourth of July holiday. Troopers arrested 240 people for DWI and investigated 152 crashes, which resulted in three fatalities and 248 injuries.
During the enforcement, drivers can expect a number of sobriety checkpoints and DWI patrols. Troopers will also be looking for motorists who are using their phones and other electronic devices while behind the wheel. Drivers should also remember to “move over” for stopped emergency and hazard vehicles stopped on the side of the road when they travel New York roadways.
Troopers will be using both marked State Police vehicles and Concealed Identity Traffic Enforcement (CITE) vehicles as part of the operation. The CITE vehicles allow Troopers to more easily identify motorists who are using handheld devices while driving. These vehicles blend in with every day traffic but are unmistakable as emergency vehicles once the emergency lighting is activated.
Data shows that the Fourth of July holiday period is especially deadly. According to the National Highway Traffic Safety Administration (NHTSA), during the July 4th period in 2015, 146 people died nationwide in alcohol related crashes. Two thirds of those crashes involved at least one driver with a blood alcohol concentration of .15 percent or higher which is almost twice the legal limit.
If you drive drunk or drugged, you not only put your life and the lives of others at risk, you could face arrest, jail time, loss of your drivers license and substantial fines and attorney fees. The average drinking and driving arrest costs up to $10,000.
The Fourth of July initiative is partially funded by the Governor’s Traffic Safety Committee (GTSC). The GTSC and the New York State STOP-DWI Foundation remind motorists that their “Have a Plan” mobile app, is available for Apple, Droid and Windows smartphones. The app enables New Yorkers to locate and call a taxi or rideshare service and program a designated driver list. It also provides information on DWI laws and penalties, and provides a way to report a suspected impaired driver
The New York State Police, GTSC and NHTSA recommend these simple tips to prevent drunk driving: