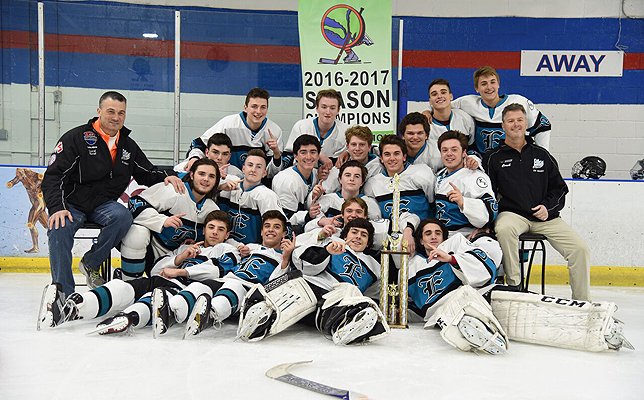 Manhasset, NY – June 29, 2017 - Kent Hitchcock of Manhasset, managing director at financial firm Morgan Stanley by day, has spent his spare time the past five years coaching the Long Island Edge, a local youth hockey club.
In March of this year, Coach Hitchcock had guided his players to the big league- the Long Island Championship. It was the second period of a hotly-contested game, and the Edge was leading 3-1. Everything was looking good…until Hitchcock suddenly suffered a near-fatal heart attack while on the bench, bringing the game to a screeching halt as parents and players alike panicked and valiantly rushed to his aid.
Christopher Boisselle is a senior at Manhasset High School and has been playing with the Long Island Edge hockey club since he was about five years old; he’s been working with Hitchcock for the past five years, back when he first became coach of the team.
The fateful incident happened during the championship game of the Long Island finals, hosted in Dix Hills. According to Boisselle, Coach Hitchcock – only aged in his mid-50’s – started noticeably showing signs of distress minutes after the team had scored a big goal against the opposition.
“One of my teammates noticed that he was hunched over and was in discomfort,” he said. “Suddenly, he collapsed and everyone from my team that was on the bench – I was on the ice at the time – started flipping out and yelling at the ref to stop the game and asking the parents to call an ambulance.”
At that point, Hitchcock had ceased breathing; thankfully, several of the parents in attendance at the game were firefighters and EMTs, and they performed CPR and utilized a defibrillator on Hitchcock while they were waiting for an ambulance to arrive on the scene to whisk the coach away to a local area hospital.
According to Boisselle, watching this tragic event unfold before his very eyes was especially difficult to experience, as he and the Hitchcock family have been very close for a number of years.
“My parents go out to dinner with them regularly, and I'm friends with his son so I'm over the house all the time,” he said. “So seeing this happen to someone that I know so well was really traumatizing.”
Once stabilized, Hitchcock was transferred to the Sandra Atlas Bass Cardiology Department at Northwell North Shore University Hospital, where he was successfully operated upon; afterwards, his long road to recovery began. Due to the extraordinary efforts of hospital doctors and staff, Hitchcock is well on his way to making a complete recovery, and is currently living a relatively normal life once again, Boisselle said.
As for the aborted championship game, the Long Island Edge was winning 3-1 at the time of Coach Hitchcock's attack; the hockey league later awarded the Edge the Long Island Championship trophy as a gesture of goodwill, as well as in recognition of the fact that they were ahead on the scoreboard when the game was stopped.
For saving the life of their beloved coach, the Long Island Edge hockey team banded together to show their appreciation to Northwell North Shore University Hospital by organizing an "Edge Out Heart Disease" fundraising event, which is taking place on July 16th from 2 p.m. to 4 p.m. at the Port Washington Skating Center in Port Washington. All proceeds from the event going directly to the hospital, Boisselle said.
“We came up with the idea for the fundraiser in gratitude for the successful surgery, so we got together as a team and organized the event,” he said. “It's going to be an open skate for anybody who wants to come down and either learn how to skate, or just cool off from the summer heat. There's also going to be raffles and silent auctions and things like that. The team had been going around town asking the local businesses for donations and things for the raffle…among the things we have are two jerseys and two hockey sticks signed by the New York Islanders hockey team.”
At the moment, the fundraiser is being considered a one-time event, but if it is successful, the possibility of it reoccurring at some point in the future hasn't been completely ruled out, either.
Despite being forced to experience the suffering of someone that he considers a close family friend, Boisselle noted that at least some good has come out of Hitchcock's brush with death...the potentially tragic event saw the Long Island Edge team band together as one in order to perform their civic duty and repay what they saw as a debt to the hospital that saved their beloved coach’s life.
“We really owe so much to the hospital for everything they did for the coach and us, and it's the least we can do to give back to them,” he said. “This was a horrible event, but at least we were able to take something positive out of it and do something for the community.”