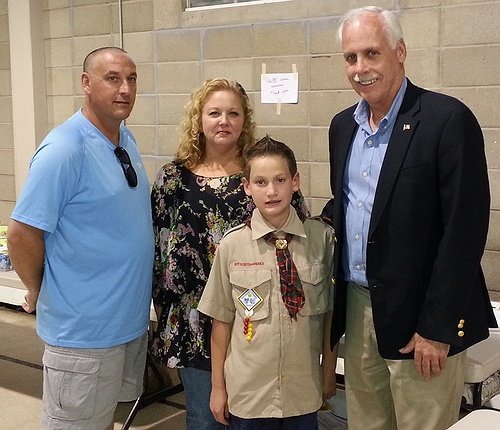 Babylon, NY - June 29, 2015 - On June 25th, Suffolk County Legislator Kevin McCaffrey (R-Lindenhurst) had a special opportunity to recognize Pack 383’s Webelos Scout Jake Gross at his Arrow of Light ceremony.  The event took place at Cross of Christ Church in Babylon, and was widely attended by Scouts of all ages, parents, and elected officials and representative from state and local governments.

Jake is a 2nd Year Webelos Scout and recently completed all of the necessary requirements in order to qualify for the Arrow of Light award.  The Arrow of Light is the highest award in Cub Scouting, and achieving this distinction allows a young Scout to “cross the bridge” into Boy Scouting.  Upon crossing the bridge, the Scout also makes a commitment to continue to abide by the values learned in Scouting, and to hopefully achieve the Eagle Scout rank in the not too distant future.

“This is truly a milestone in Jake’s Scouting career, and for his parents as well,” said McCaffrey.  “Each time a Scout moves up in the ranks, it is a testament to the hard work of the Scout and to the love and support of his family.  As a former Scout myself, I can attest to the importance of tonight’s event and how memorable it will be.  I wish Jake the best of health, luck, and happiness in all of the years to come.”

For more information on either Cub Scouting or Boy Scouting, please visit the Boy Scouts of America’s official website.