Middle Island resident Frank “J.R.” Recupero was thanked for his heroic actions during an incident which left a SCPD Officer in critical condition. 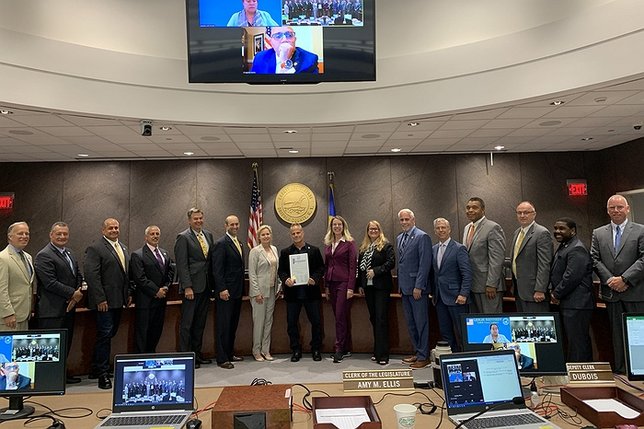 At a recent general meeting of the Suffolk County Legislature, Legislator Sarah Anker thanked Middle Island resident Frank “J.R.” Recupero for his heroic actions during an incident in Patchogue, which left a Suffolk County Police Officer in critical condition after suffering from a stab wound to the leg. Frank Recupero, a retired New York Police Department (NYPD) Officer, was presented with a proclamation signed by all 18 Suffolk County Legislators for being instrumental in detaining the suspect until the police precinct could send additional officers to the scene. While Frank Recupero restrained the suspect, a resident of Patchogue, Guillermo Sandoval, was able to address the officer’s wounds until paramedics arrived. Together, Frank Recupero and Guillermo Sandoval’s quick reactions saved the officer’s life and ensured the suspect could be arrested.
“I would like to thank Frank Recupero for his quick decision making and heroic acts that ensured that the suspect could be apprehended by the police officers while others on the scene tended to Officer Racioppo’s wounds,” said Legislator Anker. “Thank you to Frank for his involvement that helped saved an officer’s life and for his service to our country as a police officer.”
On April 10th, 2021 an incident ensued in Patchogue after Suffolk County Police Officer Christopher Racioppo attempted to pull over a driver, who was driving erratically and ultimately crashed into a Nissan at the intersection of South Ocean Avenue and Brook Street. The driver then got out of his car and tried to flee the scene. Officer Racioppo followed the driver into Guillermo Sandoval’s yard. There, an altercation occurred, during which Officer Racioppo was critically stabbed in the leg. Meanwhile, Frank Recupero heard the crash and rushed to the scene. Guillermo Sandoval called 911 and addressed the officer’s wounds while Frank Recupero utilized his NYPD training to detain the suspect. Frank Recupero restrained the suspect until arresting officers arrived on the scene. Due to Frank Recupero and Guillermo Sandoval’s heroic efforts, Officer Racioppo was brought to Long Island Community Hospital where he received lifesaving surgery. Officer Racioppo was released from the hospital on April 26th.
Frank Recupero joined NYPD in 1985 and retired in 2008 after 22 years on the force. He is a loving father to two daughters, aged 22 and 14. For more information, please contact Legislator Anker’s office at (631) 854-1600.